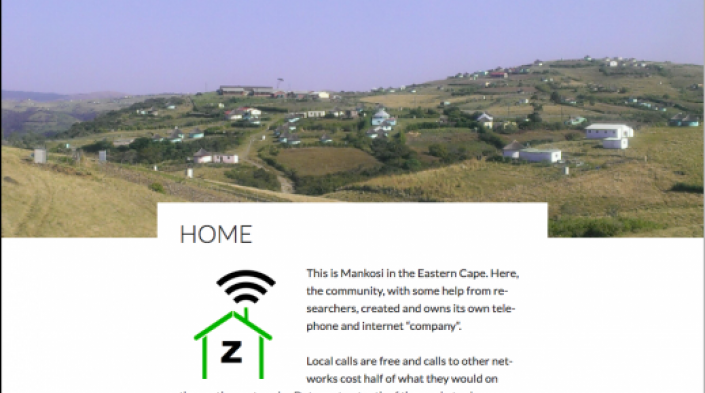 A project registered as a cooperative, Zenzeleni means “do it yourselves” in isiXhosa, one of the official languages of South Africa. What led to this amazing community initiative? is the question featured on the project’s website. The short answer is prices, since compared to similar countries, South African communication costs are still very high. However, there is more to it than prices, as Zenzeleni Networks co-founder Masibulele Jay Siya told APC in an interview, right after his organisation had joined the APC network.

Masibulele Jay Siya told us the story of Mankosi, a village that came together to build and maintain its own telecommunications network and offer affordable communications to the people in rural Eastern Cape. The wider aim of the project was to create a model for the sustainable implementation of bottom-up village telcos in rural communities in South Africa.

Mankosi Administrative Area is a rural traditional community within the Nyandeni Local Municipality in the Province of the Eastern Cape and one of the more disadvantaged areas of the country. Like many other rural areas in the country, there was no internet infrastructure until very recently.

“Most people in rural South Africa don’t have any internet infrastructure and this limits their access to better skills and living conditions in today’s world,” Jay told APC. “But if you want to help, you have to do it by empowering people in a way that they see the value of being connected. So talking to local authorities is the first thing we did, making sure everyone else in the community had a say.”

How was the project shaped? Zenzeleni started from scratch, in places with no electricity. “We wanted to provide cheaper voice services for the community and we had to be creative, so we relied on solar panels.” With an initial budget provided by the University of the Western Cape for hardware and the training for its installation, the project focused on building locally designed systems, with local network installers chosen by the community. “After the installation, we faced many technical and economic problems, like how to charge mobile phones, that we are still trying to solve”, Jay highlighted.

Putting the accent on the community factor

When asked about the biggest challenge they have faced, Jay mentioned initial resistance to change. “Technological changes involve frustration, and you need sustainable solutions. In many rural areas we found computers that were sitting there and no one used them because no one was ever taught how. So a big part of our work now is to provide services to schools, gathering data to see what they may need internet for, so that they find it useful, and creating a sustainable solution for teachers to use them with students. There had been training projects before, but not bottom-up approach projects, so they were never owned by the community. Training is needed and we want to do it locally, through local people, training trainers.”

Everything about Zenzeleni Networks puts the accent on the community factor. “We understand community as people getting together to see what the problems are and find solutions together. Of course all of this is not about the internet itself, it is about the collaboration, the skills, the social needs, the building something together.”