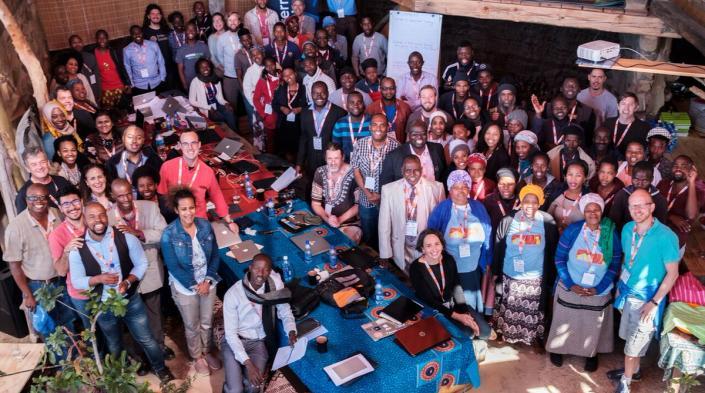 How can we help people gain easy and affordable access to a free and open internet to improve their lives and create a more just world? This question has driven our work and strategic priorities for almost 30 years. APC’s strategic plan for the period 2016-2019, developed with our members network, identified six key result areas to address emerging issues and opportunities in the use and development of information and communications technologies (ICTs) for social justice and advocacy: access, rights, a feminist internet, governance, use and development, and the APC community. As the first in a series of six articles, this piece will focus on access.

Promoting better access entails supporting sustainable, affordable connectivity for those who have been excluded or remain unconnected due to various barriers, including lack of coverage, affordability, and aspects of identity. In 2018, this translated into the uptake of policies that emphasise people-centred approaches to access at all levels of governance, the continued development of a collaborative network of advocates and practitioners working on people-centred access, and an increased attention to community-led, independent, small-scale connectivity projects.

Let’s see how we worked towards these goals through some examples from the communities we work with.

The year 2018 saw a spate of internet shutdowns that hindered public access to information and communications, particularly throughout the African continent, where many APC members are based. Our community worked hard in countering this trend and raising awareness about the power of internet disruptions to stifle public debate, social action and dissent, particularly during electoral periods. The KeepitOn campaign, which APC is part of, and which brings together civil society organisations, activists and citizens to combat this practice, was a key effort on this front, producing statements and joint letters on keeping the internet open and secure in Ethiopia and Pakistan, among others.

The APC community continued to push the African Declaration on Internet Rights and Freedoms as a tool to affirm "the rights of all to engage in individual or collective expression of oppositional, dissenting, reactive or responsive views, values or interests through the internet," including the rights of children, which is the focus of our member Rudi International, based in Democratic Republic of Congo. For its part, APC member PROTEGE QV produced a report exploring the situation of internet rights and freedoms in Cameroon with respect to the 13 principles established in the Declaration, with the support of an APC member subgrant.

The Local Access Network project, an initiative by APC in partnership with Rhizomatica and the Internet Society aimed at exploring the viability of community-based local access infrastructure projects as a means to connect the unconnected, gained momentum in 2018 as the community networks movement continued to grow. Through in-depth research, policy advocacy, movement building and support for existing alternative connectivity initiatives, this project considered the possibilities that these networks offer for more inclusive, autonomous internet access for underserved communities.

The 2018 edition of Global Information Society Watch (GISWatch), produced with the support of the International Development Research Centre (IDRC) in the framework of the Local Access Networks project, focused on the powerful opportunities that community-owned networks offer for connectivity around the world. It was launched at the IGF 2018, with the presence of several APC members, who highlighted “the many ways to ‘do-it-yourself’ to end digital exclusion.”

Throughout 2018, APC also published a monthly Community Networks and Local Access Monthly Newsletter, which continues in 2019, sharing the latest news about community network projects and technology around the world, and often featuring the work of APC staff and members making important contributions to this field.

Additionally, as part of their work to help expand the profile of community networks and consolidate knowledge around alternative models of connectivity in Africa, APC member Zenzeleni Networks organised and hosted the third annual community networks summit in the region in partnership with the Internet Society and APC. Attended by small-scale community operators and other stakeholders from 20 African countries, the event was an important capacity- and movement-building moment for community networks in the region, which provided technical, sustainability and governance training. The summit attracted over 30 women, a significant jump from the previous year, and gave many participants their first opportunity to participate in a conference.

Beyond work in policy and research, APC and its members made important strides towards building an inclusive movement with a bottom-up approach through sharing stories and raising awareness, while exploring the successes and challenges of the local access movement.

In the search for awareness raising, we published an interview series under the title “What’s new on the spectrum?”, with experts and community network advocates from around the world addressing issues related to electromagnetic spectrum allocation, policy and use. Our member in Brazil, Nupef Institute, continued working on its collaborative website https://espectro.org.br, which brings attention to issues around spectrum in English, Portuguese and Spanish.

Confronting one of the main barriers facing local access infrastructure and community network advocates around the world, various APC members and staff pushed for more enabling policy frameworks at a local, regional and global level in 2018. Developing a more conducive regulatory landscape represents a key step in supporting the growth and expansion of people-centred networks.

One important example of this was Zenzeleni’s advocacy for a more accessible and inclusive spectrum policy in South Africa. In partnership with APC, representatives from the community-owned network held a public consultation about the assignment of high-demand spectrum and organised a governmental workshop outlining policy recommendations for the Department of Science and Technology.

APC and its members also ensured that community networks were a central topic at multiple high-level internet governance meetings throughout the year, including the Latin America and Caribbean Internet Governance Forum (LAC IGF), which was initiated by APC along with LACNIC and Nupef Institute. Several APC members acted as panellists and organised sessions, including one of the forum’s main panels, moderated by APC with members Colnodo and Rhizomatica, which focused on challenges, achievements and experiences on managing community networks in Latin America.

At the global Internet Governance Forum (IGF) in Paris, representatives from AlterMundi, guifi.net and Rhizomatica participated in the Dynamic Coalition on Community Connectivity, while APC staff and partners organised and contributed to the session on accessing spectrum for community networks. Fantsuam Foundation, Digital Empowerment Foundation and Rhizomatica were also panellists in a session on innovative approaches to connecting underserved areas.

APC also published a number of joint submissions and papers on local access issues with members. Zenzeleni Networks, APC and the University of Western Cape produced a written submission for the Electronic Communications Amendment Bill consultation in South Africa; APC submitted joint comments with the Internet Society on the technical and policy framework for white space devices in Canada; and Pangea founder Leandro Navarro authored an issue paper, published by APC, on using the commons model for networks infrastructure. In addition, a number of APC members contributed to the report produced as the official outcome of the IGF Dynamic Coalition on Community Connectivity's work in 2018.

Community networks, which were the main focus of APC’s participation at the 2018 session of the Commission on Science and Technology for Development (CSTD), were recognised as an emerging topic in a UN resolution on World Summit on the Information Society (WSIS) follow-up:

As highlighted in our article "Helping women and non-binary communities gain access: Reflections from the Best Practice Forum on Gender and Access on the potential of alternative models of connectivity", including a gender approach to access is key. Within our capacity-building work on access in 2018, we worked on ensuring gender representation and voice.

We contributed extensively to the capacity building of women and other marginalised social groups, given the ties of most of our members with existing grassroots initiatives. Ongoing support was provided to grassroots networks in countries such as Namibia and Honduras, among others. The support from project team members was a key factor for AfChix to be selected as one of the winners of the WomenConnect Challenge in 2018 for building the capacity of African women to deploy and operate community networks.

Additionally, the APC community contributed to building increased awareness among male researchers of how prevalent some voices are in the local access movement and the decisions and actions that perpetuate these inequalities.

In 2019, the work of APC and its network on local access initiatives is set to grow dramatically, both in reach and impact. Much of this momentum will stem from APC’s recently launched follow-up to the Local Access Networks project, entitled “Connecting the unconnected: Supporting community networks and other community-based initiatives”. Undertaken in partnership with Rhizomatica and supported by a Swedish International Development Cooperation Agency (Sida) grant, this year-long project will focus on supporting 12 community networks in Africa, Asia and Latin America, with the aim of contributing to an “enabling ecosystem for the emergence and growth of community-based connectivity initiatives in developing countries.” As part of the initiative, APC has hired a gender and women’s engagement coordinator, a movement building coordinator and an administrative assistant, as well as three regional coordinators for each of the target regions.

As we head for our 30th anniversary, we maintain our commitment to battle attempts to hinder access throughout the world and build independent networks that put people’s rights in the centre.

Next in the mini-series: The APC community’s work on rights in 2018.