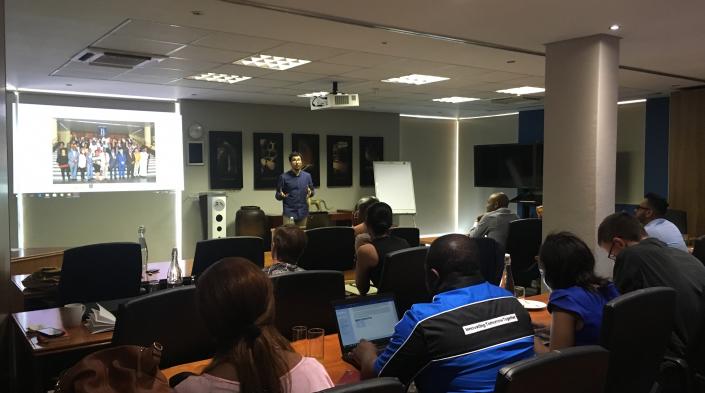 “There is so much potential in rural South Africa, and with a little bit of capacity building, a lot of things could happen around affordable internet access,” summarised Carlos Rey-Moreno, coordinator of APC's Local Access Networks project, at the end of a productive workshop about community networks with government stakeholders at the Technology Innovation Agency (TIA) in Pretoria on 2 October.

The presentation, titled “Advancing Rural Connectivity in South Africa: A Case for Community-Owned Networks”, was delivered by Rey-Moreno and Shaun Pather of the University of Western Cape and focused on the successes and lessons of APC member Zenzeleni Networks, a sustainable cooperative network based in Mankosi, Western Cape, and a useful case study for community-owned internet in rural South Africa.

Speaking to multiple staff members from the TIA, the Department of Science and Technology (DST) and the Department of Telecommunications and Postal Services (DTPS) as well as representatives from the Council for Scientific and Industrial Research (CSIR), Universal Service and Access Agency of South Africa (USAASA) and Media Monitoring Africa (MMA), Pather and Rey-Moreno outlined the regional and global policy landscape before discussing bottlenecks of the current policy regime and offering specific policy recommendations to support community network development.

Anitha Ramsuran, project manager in Innovation for Inclusive Development at TIA, which provided funding for Zenzeleni Networks, highlighted the importance of the event. “We are very excited to be a part of this project,” she said, “and to host this group of minds.” She added that the lessons coming out of Zenzeleni are “helping to shape policy.”

Indeed, how to push for effective policy change was the dominant theme of the day. The workshop was intended as a way to solicit feedback on a policy brief to be published by the DST at the end of the year – an “important milestone” for the project, according to Ramsuran. But Pather and Rey-Moreno are also hoping to bring the issue of community networks beyond the South African context to high-level ICT policy talks at the International Telecommunication Union (ITU) Plenipotentiary Conference in Dubai from 29 October to 19 November. Making a successful case for community networks on the global stage “will make it easier for African countries to make policy changes,” said Rey-Moreno.

Ultimately, however, it will take the combined efforts of government stakeholders and civil society groups to build and sustain the community network movement on a local and regional level. “If we want this to go further, it’s not up to Shaun and me to write another policy paper,” said Rey-Moreno to participants. “It’s up to each and every one of you to take this home to your own constituencies and parent units, groups or organisations.” The biggest barriers to widespread community network implementation are “interpretation, will and leadership,” added Pather.

With South Africa falling well short of its universal access goals and the digital divide continuing to grow, the issue of connectivity could not be more timely or relevant. According to Ephraim Phalafala, deputy director of DST’s Sustainable Human Settlements Agency, it is projects like Zenzeleni that have the “potential to achieve the government’s broad development goals.” This makes it essential “to provide an enabling environment for widespread implementation of such initiatives.” As Pather puts it, we need to “move quickly from policy to action.”

But beyond the question of meeting policy targets, community networks are about human impact. As Rey-Moreno notes, enabling policies that assist disadvantaged communities to implement and manage their own affordable, sustainable internet connectivity projects offer an important sense of self-determination and "new opportunities for them to thrive and grow.”