Joint statement of solidarity with Maria Ressa and Rappler; call for all charges to be dropped

Home / Publications / Joint statement of solidarity with Maria Ressa and Rappler; call for all charges to be dropped 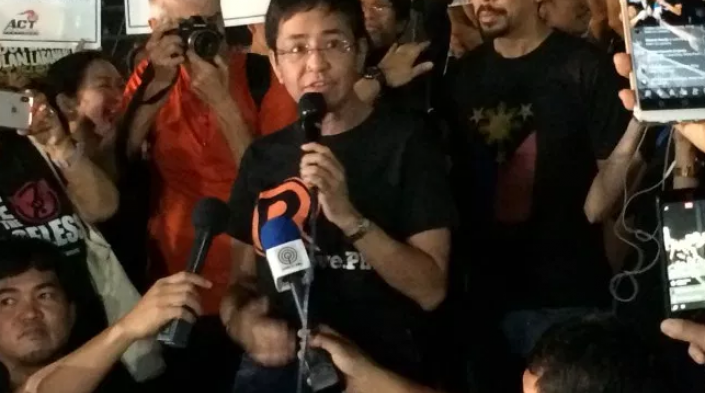 We, the undersigned, view with extreme concern the unwarranted arrest of Rappler’s chief executive officer Maria Ressa on Wednesday, 13 February 2019, based on libel charges arising from a story published almost seven years ago by the online news site. These charges had initially been dismissed as baseless by the same public institution that is now instrumental in the prosecution of her case.

We note that Ms. Ressa’s arrest was effected around 5:00 p.m., at the close of business hours, making it impossible to post bail, and forcing her to spend the night in detention at the National Bureau of Investigation (NBI).

Furthermore, the Rappler story that led to the charges was published in May 2012, four months before the enactment of the Cybercrime Prevention Act on which the justice department has based its case against the online news site.

Almost a year ago, on 22 February 2018, the NBI, which made the arrest on Wednesday, dismissed a case filed by a local businessman named in the 2012 Rappler story, stating that it was “without basis.” The NBI’s complete turnaround a year on, on the flimsy justification that the Rappler article in question was updated in 2014, would be laughable if it weren’t so manifestly unjust.

Although Ms. Ressa was released on bail on 14 February 2019, the charges against her remain pending.

We denounce in the strongest possible terms the encroaching criminalization of journalism and free expression in the Philippines. We also firmly condemn the unabating intimidation of the press, specifically segments thereof, such as Rappler, that refuse to be silenced by a government whose chief executive has repeatedly shown his contempt for the media.

The issues surrounding the cyber libel charge that Ms. Ressa and the online news site have been slapped with, and the circumstances leading to her arrest, provide compelling proof that the rule of law has been wantonly violated by President Rodrigo Duterte and his administration.

The shameful trend of the Philippine government wielding its power and employing heavy-handed tactics to silence media outlets whose reportage counters state-driven narratives, and courageously exposes malgovernance, calls to mind the grueling plight of journalists elsewhere in the region. As laws suppressing fundamental rights continue to be enacted, press freedom and free expression have steadily declined across Southeast Asia.

We must not forget the 2017 arrest of Reuters journalists Wa Lone and Kyaw Soe Oo and their consequent sentencing to a seven-year prison term; Radio Free Asia (RFA) Khmer Service journalists Uon Chhin and Yeang Sothearin, who spent nine months in jail on “espionage charges” and could be re-arrested any time; and the growing list of independent media outlets, bloggers, and activists who remain in danger for simply doing their work and exercising their fundamental freedoms.

Freedom of expression and freedom of the press are basic rights guaranteed in Article 19 of the International Covenant on Civil and Political Rights. The 1987 Constitution of the Philippines enshrines these freedoms.

A free and independent press, including outlets that criticize the government, are never a threat to society. They are a crucial check on abuse of power and a pillar of participatory governance. Critical and dissenting voices are par for the course in a healthy and thriving democracy.

Rappler has been one such voice amid a spate of threats to human rights in the Philippines and an onslaught of policies that violate those freedoms, resulting from President Duterte’s authoritarian style of governance.

The news website, and its journalists, do not deserve to be persecuted. On the contrary, they must be lauded and allowed an enabling environment in which to carry out their work.

We call for all charges leveled against Maria Ressa and Rappler to be dropped, and call on President Rodrigo Duterte to restore genuine press freedom in the Philippines.

National Union of Journalists in the Philippines (NUJP)