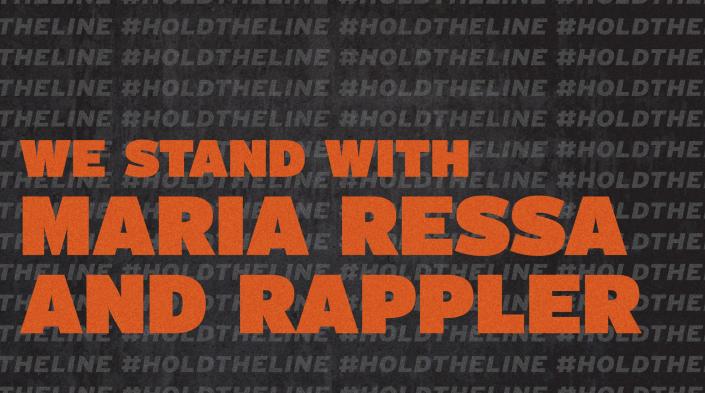 The #HoldTheLine (#HTL) Coalition welcomes the dismissal of a cyber-libel charge against Rappler CEO and founder Maria Ressa in the Philippines - the second spurious charge against Ressa to be dropped in just two months. The #HTL coalition calls for all remaining charges to be immediately dropped and the endless pressure against Ressa and Rappler to be ceased.

In a hearing on 10 August, a Manila court dismissed the case “with prejudice” after the complainant, college professor Ariel Pineda, informed the court he no longer wished to pursue the cyber-libel claim against Ressa and Rappler reporter Rambo Talabong. The move followed the dismissal on 1 June of a separate spurious cyber-libel case brought by businessman Wilfredo Keng, also “with prejudice” after Keng indicated he did not wish to continue to pursue the claim.

“We welcome the overdue withdrawal of this trumped-up charge against Maria Ressa, which was the latest in a cluster of cases intended to silence her independent reporting. We call for the remaining charges against Ressa and Rappler to be dropped without further delay, and other forms of pressure against them immediately ceased,” said the #HTL steering committee.

Ressa was convicted on a prior spurious cyberlibel charge in June 2020, based on a complaint made by Wilfredo Keng in connection with Rappler’s reporting on his business activities. If the charge is not overturned on appeal, Ressa faces a possible six years in prison. Ressa and Rappler are also facing six other charges, including criminal tax charges; if convicted on all of these, Ressa could be looking at many years cumulatively in prison.

The #HTL coalition continues to urge supporters around the world to add their voices to a continuous online protest that will stream until the charges against Ressa and Rappler are dropped, and to don a #HTL mask in solidarity. The joint #HTL petition also remains open for signature.

The Philippines is ranked 138th out of 180 countries in RSF's 2021 World Press Freedom Index.

Note: The #HTL Coalition comprises more than 80 organisations around the world. This statement is issued by the #HoldTheLine Steering Committee, but it does not necessarily reflect the position of all or any individual Coalition members or organisations.