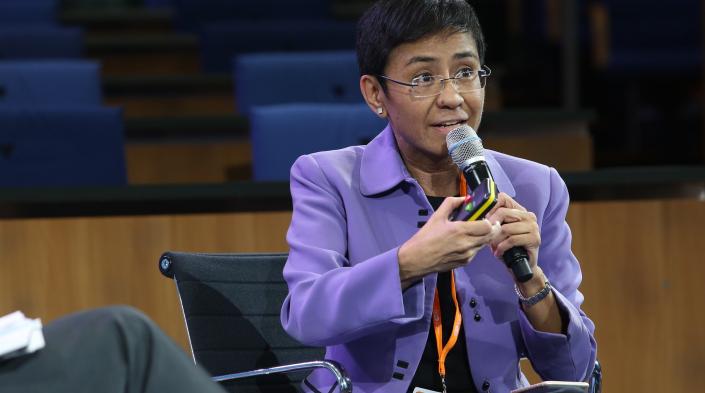 By Vino Lucero for EngageMedia

On June 15, 2020, online news organization Rappler’s CEO and executive editor Maria Ressa and former Rappler researcher-writer Reynaldo Santos Jr. were convicted of cyber libel charges over a seven-year-old report on a businessman’s alleged links to illegal drugs and human trafficking. This cyber libel charge is just one of eleven court cases filed against Rappler in recent years after being branded one of the staunchest critics of Philippine President Rodrigo Duterte for their coverage of his war on drugs and overall government leadership. Ressa and Santos were convicted, while Rappler, the company, was acquitted.

The ruling, which can still be appealed and brought up to the Supreme Court, is the most recent addition to a growing list of attacks on press freedom and freedom of expression in the Philippines. Recent attacks include the shutdown of broadcast network ABS-CBN, the railroaded transmission of the Anti-Terrorism Act of 2020 for Duterte’s signature, and the attacks on national and regional news organisations both online and offline. The conviction is seen by many journalists and press freedom advocates as yet another attack against news organisations and press freedom in a country touted as having one of the freest presses in Southeast Asia.

Critics of the ruling have blasted the arguments that led to the conviction. For instance, the alleged libellous story in question was published four months before the Philippine Cybercrime Prevention Act of 2012 was signed into law. The updating of the investigative report almost two years after its publication and the correction of a typographical error, however, was exploited as a technicality to say that the cyber libel law applies to the report. The Philippine Department of Justice also unearthed an ancient law to extend libel’s prescription period from one year to 12 years to validate the businessman’s filing of the cyber libel case five years after its publication and three years after the updating of the story.

Beyond an attack on press freedom, what else are the issues at hand?

Today, the cyber libel provision of the cybercrime law has been met with protests and was heavily criticised by civil society when it was passed. And this is not the only tool that could be used to silence critical opinions on and offline. Cyber libel joins the documented use of troll armies to sway public opinion, the upcoming Anti-Terrorism Act of 2020 with vague provisions that can jail anyone who expresses dissent against the Philippine government, and other online and offline forms of harassment, intimidation, and violence against journalists and activists.

The implications of this kind of legal interpretation of the cyber libel law can go beyond Rappler and the press, impeding all Filipinos’ right to freedom of expression in the digital space. University of the Philippines professor Danilo Arao weighed in on how the decision can affect everyone: “The guilty verdict on Ressa and Santos sends a chilling effect not just on journalists but on all people. After ABS-CBN and Rappler, you (yes, YOU!) could be next,” he said. “Cyberlibel is as real as the theory of continuing publication. They are weaponised to repress.”

Rappler reporter Mara Cepeda also shared how the prescription period interpretation of the cyber libel law can be exploited further: “You know what Maria Ressa’s guilty verdict means? You could still be held liable for libel for an online article posted BEFORE the Cybercrime Law was enacted,” she said. “The Duterte government’s message to its critics is clear: toe the line or you’re next. But we will not be cowed.”

With all these issues happening in the Philippines, one can only imagine how those in power from countries with stricter laws on press freedom and dissent can take inspiration from the moves of the Philippine government and elite. It’s already happening in other countries in the region like Myanmar and Thailand.

Supporting Rappler, press freedom, and freedom of expression and dissent: Who have spoken up?

Support from across sectors poured in to show solidarity with Ressa, Santos, Rappler, and the whole news media community given the cyber libel ruling and its implications on press freedom in the country.

The following Philippine civil society organisations and groups have released statements or have spoken up online to show support for Ressa, Santos, and Rappler:

International and non-Philippine civil society groups, news organisations, and individuals also expressed their support for Ressa, Santos, and Rappler. Some of the statements highlighted that an attack on one is an attack on the whole news media sector, not just in the Philippines but also globally.

What can we do to help ensure press freedom and freedom of expression?

In addition to speaking up both online and offline about the issue, civil society organisations and individuals across the world can also do more in contributing to increasing the awareness and engaging their audiences to take action on Philippine and global press freedom issues, as well as to connect the fight for press freedom to the fight for freedom of expression.

Civil society can help keep the space for dissent and journalism open and protected. Solidarity on this issue helps ensure that media organisations in our country and region can work independently, without legal threats hanging over their heads as they do their jobs.