Encounters, coffees and conflicts: Reflections from action-research on a feminist autonomous network 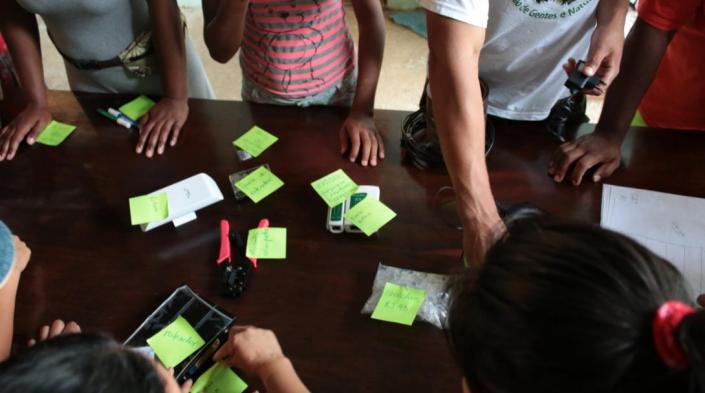 This report summarises reflections from the action-research project carried out between 2019 and 2021 by a group composed exclusively of women, who set up a community network in an area without internet connectivity in Brazil – the Terra Seca quilombo community – while conducting a participatory research process on information and communication technologies, more specifically community networks, through an intersectional feminist lens.

This action-research project envisaged the implementation of a Wi-Fi community network in Terra Seca, pursuing the involvement of the entire region in multiple workshops and knowledge exchanges on a range of different related issues: networks, feminist infrastructures, popular education, agroecology, gender and race relations, traditional and digital technologies, and technology and communication autonomy.

The project was also aimed at the production of knowledge in this field based on two initial research questions that would guide reflections from the experiences with the local community: How can we expand the reach of community network technologies among women and traditional populations, considering the power relations that influence the prospect of autonomous connectivity and communication? And what are the main shifts that occur when technological infrastructure is thought of and developed through an intersectional feminist perspective? Considering the intersectional lens, the researchers also posed a structural question to themselves throughout the development of the project: How is race connected to unequal power and systemic structures in this experience, considering that this project was carried by a group composed mostly by white women, in a territory of Black women? (Quilombos emerged as refuges for Black people who escaped repression during the entire period of slavery in Brazil, between the 16th and 19th centuries, and it is their descendants who live in these communities today.)

More than leading to answers, the questions helped the researchers to expand a set of reflections from the encounter between different ways of living and of producing knowledge and techniques that to some extent move beyond the normative models in the field of digital technologies, such as white male predominance in this field and the processes of concentration of power on the internet by large corporations that use manipulative and non-transparent models of relations with these technologies. The aim of this report is to share part of the reflections that have emerged from this experience, with the expectation of contributing to research and initiatives for technological appropriation that also help to foster greater diversity in these fields.

It should be noted here that the researchers understand community networks as a connectivity solution to reduce the lack of access  through the collective installation of a local-level infrastructure and shared management of the technical and human aspects of a network. Recently, community networks have been perceived as an alternative to the search for greater autonomy in relation to communication and connectivity and to promote local social interactions – in different regions – with digital infrastructures. As a result, the debate on community networks has been gaining new perspectives, going beyond the field of connectivity solutions for places and populations without internet access, to become linked to other political agendas, such as critical perspectives of the internet and engagement in human rights struggles. Among the multiplicity of agendas that can permeate the process of installation and maintenance of community networks is the intersectional feminist perspective, which seeks to make this field welcoming to different groups and bodies, including different women.

The report beings with a brief presentation of the Terra Seca quilombo and the women who participated in the research. It then provides an overview of the methodological approach adopted along this journey and the project’s trajectory over the course of two years. It concludes by bringing together reflections around three topics that emerged as fundamental in the process: 1) the meaning of feminist infrastructures  for this community network, 2) the importance of the perspective of race, and 3) the researchers' learnings in the process of attempting to translate intersectional principles and intentions into practice, while facing the constant presence of the unforeseen.

It is important to highlight that among the unforeseen events was one that could not have been imagined at the beginning of this journey: the emergence of a global pandemic and its profound negative impacts on Brazil, aggravated by the fact that the country was facing a global health emergency under a far-right government that denies science and public health measures, violates human rights, and adopts an anti-feminist stance and aggressive authoritarian inclination towards traditional communities, such as quilombolas. This report does not delve into these developments, but it is important to point out briefly how this difficult context framed the researchers' reflections when sharing the project's findings.

This report was developed to share the findings of the project “Action-Research on Feminist Autonomous Networks”, supported by the Feminist Internet Research Network (FIRN) led by APC and funded by the International Development Research Centre (IDRC).

A number of zines were also produced as part of the same project and can be downloaded here: