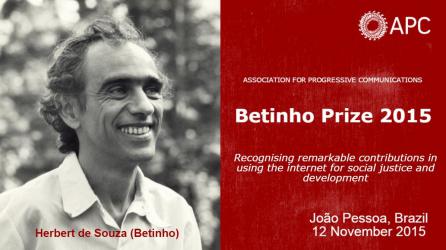 In the year 2000, we launched the APC Betinho Communications Prize, with this motto:

The internet has not yet been converted into a giant online shopping mall. There are thousands of projects big and small working online around the world that prove that the internet can be and is being used as a powerful tool for development and social justice.

Although much has changed since then, we believe the same values still apply in today’s online scenarios, and recognising them seems more important than ever. This is why we are awarding the Betinho Communications Prize, which will go to the most significant contribution in using the internet for social justice and development. And we are doing at a very symbolic time for APC: during APC’s 25th anniversary celebration at the Internet Governance Forum (IGF) in Joao Pessoa, Brasil.

With this prize, we also commemorate the inspirational life and work of Herbert de Souza, a visionary Brazilian social activist and founder of the Brazilian Institute of Social Analysis and Economics (Ibase), an APC founding member. We will be honouring him, and other outstanding examples of how the internet has made, and can still make, a real difference for the world’s communities.

At the Association for Progressive Communication’s (APC) 25th anniversary celebrations held on 12 November in Joao Pessoa, Brazil, APC announced Carlos Afonso as the winner of the 2015 Betinho Prize. In a standing ovation, the prize was handed over by Anriette Esterhuyssen, APC’s executive director, and Eddie Farwell, APC’s first coordinator and executive director.*

Carlos Afonso has been working in the field of human development since the 1970s, initially as a consultant to the National Planning Office of the Salvador Allende government in Chile and later for international development agencies in Canada and other countries. He has been an adviser to the United Nations Development Programme (UNDP), the International Development Research Centre (IDRC), the Kellogg Foundation, the Friedrich Ebert Foundation and other international organisations on issues related to information and communications technologies (ICTs) and human development in countries like Brazil, Nicaragua, Colombia, Honduras, Mozambique, Angola and Cambodia.

Carlos, Betinho, and economist Marcos Arruda founded the Brazilian Institute of Social and Economic Analyses (Ibase), which in 1990 became one of the founding members of APC.

Read a short biography of the winner here.