2030 Agenda for Sustainable Development: How can we effectively campaign for freedom of expression?

Home / News / 2030 Agenda for Sustainable Development: How can we effectively campaign for freedom of expression? 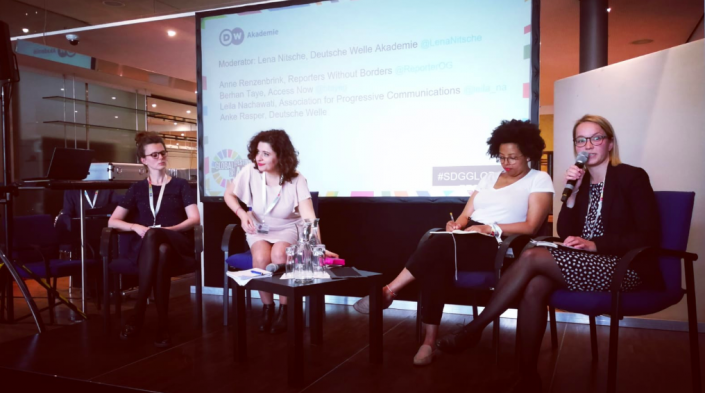 Freedom of expression and freedom of the press are key issues in the United Nations 2030 Agenda for Sustainable Development. However, media organisations do not always cover the Agenda and the numerous initiatives behind it, which leaves them unknown to the greater public. How can we bridge these gaps between key human rights initiatives and the wider public, with the help of the media? To address this, APC participated in a session at the Global Festival of Action in Bonn, Germany, an annual event that focuses on how to scale up the impact of the Sustainable Development Goals (SDGs), which also coincided this year with the celebration of World Press Freedom Day.

APC's Leila Nachawati Rego joined Deutsche Welle's Anke Rasper, Anne Renzenbrink of Reporters without Borders Germany and Berhan Taye of Access Now for the session "Your 2030 campaign: Freedom of expression and media action". Moderated by Lena Nitsche from DW  Akademie, it focused on how to scale up the impact of Goal 16 of the SDGs: Right to press freedom and information.

In the words of the Berhan Taye, who has been very active around the recent spate of internet shutdowns throughout the world, and on the African continent  in particular, "the media plays a key role in reporting about censorship and in contributing to freedom of expression. It is crucial that they help document these incidents to prevent more internet shutdowns in the future."

For background on Goal 16 of the SDGs, check this video:

How do you design a successful advocacy campaign?

Anne Renzenbrink of Reporters without Borders Germany presented the Uncensored Playlist, a campaign that turns censored articles into music and uploads them onto freely available music streaming sites. "At times it was difficult to find local journalists who wanted to participate, so we often worked with people already living in exile,” she noted.

On the KeepItOn campaign against internet shutdowns, Taye highlighted the need to define what shutdowns are, talk about them publicly, raise awareness and gather solidarity. “When a shutdown happens, people now use the hashtag #keepiton. We often find out about shutdowns by following the hashtag,” she said.

APC’s Leila Nachawati presented Take Back the Tech! and the 16 days against gender-based violence campaign. "It's key to build evidence in order to have proof that we're not acting on intuition. It's also key to have principles and values. That's why we base our work on the Feminist Principles of the Internet."

After the panellists shared examples of successful campaigns, participants formed groups where they worked on developing and pitching their own campaign. The topic, which was jointly decided, was cyberbullying (also referred to as online harassment).

"The main problem is that cyberbullying is not visible online,” one group highlighted. “We want to focus on school children, with the goals of making people more sensitive and creating empathy for the victims. We would use tools like memes to attract young people."

"Aren't we all bullies?” was the focus of another group. “Instead of creating labels, we wanted to discuss general behaviour and ethics online. So we wanted to define and encourage self-reflection on our own behaviour. We would do this by creating an educational platform where people can express themselves without fear of being bullied/harassed."

“We need to address cyberbullying as violence, which has very serious consequences,” the last group reflected. “Our idea was to produce a short film showing a bully and a victim of bullying in conversation to identify the root causes, why people inflict cyberviolence."

After the presentations, panellists shared insights on what works and what doesn’t when organising a campaign around a certain issue. On how to amplify the outreach of our campaigns, Deutsche Welle's Anke Rasper stressed the role of the media and how to reach out to it more effectively. "Storytelling is key. If you want to get journalists on board, you need to give us a story,” she said. “We need people who carry the story, a conflict, someone resolving the conflict. We can actually help you find a voice, we can add that extra value."

Rasper also stressed the importance of protecting your sources, being aware that exposure may be harmful. "You need to be very careful with people's anonymity. You can put both victims and perpetrators in danger. So, be clear about what it really is that you want to do and whether your actions actually can achieve that."

Other concerns that were raised for effective campaigning were the importance of conducting research before making decisions on what to campaign for and how. “To design a campaign that has a real purpose and can have real impact, base it on research,” Renzenbrink emphasised. “Getting the facts and figures right before you take any further action is very important."

Nachawati noted the importance of knowing whether there is momentum that can make your campaign engage an already receptive audience. "You need to be aware of your momentum. At the moment it seems almost impossible to campaign about certain issues that don’t seem to be on anyone’s agenda, such as freedom of expression in Syria, Bahrain or even the extremely closed North Korea.”

On the other hand, she stressed, there is a clear momentum for issues such as violence against women or climate change, which makes it easier to pitch a campaign in a way that the media, and the general public, will be receptive to. “So take your time to reflect on whether you have momentum or whether you don’t, in which case you may spend your energy in trying to build and contribute to creating that momentum. But that will take much time and patience," she cautioned.