What is the role of media in elections and democracy? Join us in celebrating World Press Freedom Day 2019

Home / News / What is the role of media in elections and democracy? Join us in celebrating World Press Freedom Day 2019 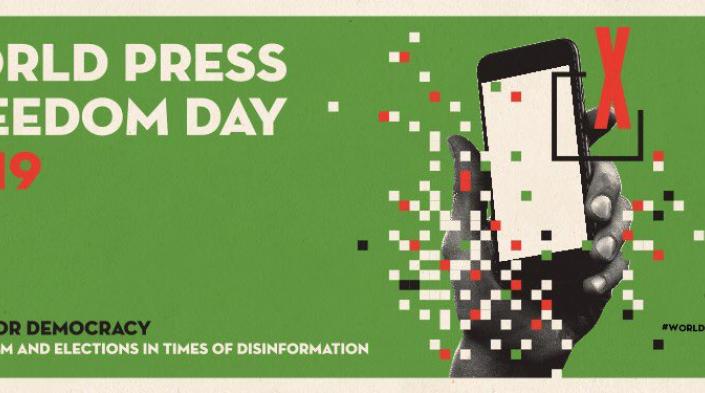 To commemorate World Press Freedom Day 2019, the main celebration is taking place in Addis Ababa from 1 to 3 May 2019. The event, whose primary focus this year is the relationship between the press and democracy, provides a platform for different actors to participate in an exchange on current issues, threats and achievements concerning freedom of the press.

More than 100 national events around the world are expected to complement the main celebration. One of these is being organised by APC member Voices for Interactive Choice and Empowerment (VOICE) in Bangladesh, who are hosting a dialogue entitled "Media for Democracy: Journalism and Elections in Times of Disinformation" on 3 May in Dhaka. The dialogue, which will be attended by journalists and other media practitioners, academic experts, human rights activists, students and youth, among others, will broadly discuss issues around constitutional and international human rights obligations, building linkages to freedom of opinion and expression for promoting peace and democracy and the role of media.

Mapping the impact of digital technology during elections

APC member CIPESA will be hosting a session at the main event in Addis Ababa, "Mapping the Impact of Digital Technology from Network Disruptions to Disinformation", building on an earlier colloquium organised by the Global Network Initiative (GNI) and UNESCO.

According to UNESCO, “the internet and digital technologies allow candidates a direct means by which to communicate with the voting public. However, some digital technologies used to influence people’s choices escape scrutiny – such as whether, for example, advertising complies with the rules of electoral authorities. Without effective access to information and transparency, the integrity and legitimacy of elections can be compromised. We need technology companies and governments that are more transparent, and that respect the rules and regulations of elections, in order to guarantee free and fair elections.”

To address this, this session will map the different ways in which digital technology impacts election-relevant information flows to help policy makers, companies, elections administrators, elections observers, media, and other stakeholders identify and mitigate risks, improve planning and coordination, and enhance transparency around their efforts to support elections.

As CIPESA noted in a report released earlier this year, partial or complete internet shutdowns have become increasingly frequent in the African region during election periods, representing a serious violation of the right to the free flow of information. For more background on the recent spate of internet shutdowns in Africa, read our piece: "It's like being cut off from the world".

Freedom of expression and media action

Freedom of expression and freedom of the press are key issues in the United Nations 2030 Agenda for Sustainable Development. However, media organisations do not always cover the 2030 Agenda and the numerous initiatives behind it, which leaves them unknown to the greater public. To address this, APC is participating in the Global Festival of Action in Bonn, Germany to join in discussions on how to scale up the impact of the Sustainable Development Goals (SDGs) and strategise around joint initiatives.

By using three campaigns on freedom of expression and access to information as case studies, a workshop titled "Your 2030 campaign: Freedom of expression and media action" will highlight their importance to sustainable development as both a goal (SDG 16) and a driver of the 2030 Agenda. APC's Leila Nachawati Rego will join DW Akademie’s Lena Nitsche and Judith Liesenfeld, Anne Rezenbrink of Reporters without Borders Germany, and Berhan Taye of the KeepItOn campaign. In the words of Berhan Taye , "the media plays a key role in reporting about censorship and in contributing to freedom of expression. It is crucial that they help document these incidents to prevent more internet shutdowns in the future."

Check out this video for an introduction to Goal 16 of the SDGs: Right to press freedom and information:

What role should journalism play to combat disinformation, particularly during elections?

Reports by the Committee to Protect Journalists reveal that press freedom, key to stable and representative democracies, is increasingly under pressure. To reflect on this and highlight the threats that journalists face in many parts of the world, we asked members of our community to share their insights on this question: What role should journalism play to combat disinformation, particularly during elections? Here are some of their thoughts:

"Verifying news and issues shared on social media during elections is key. The challenge is keeping up with the fast-paced circulation online. Journalists should be proactive and maintain high ethical standards to keep citizens informed during such a crucial period." (Koliwe Majama, coordinator of the African School on Internet Governance (AfriSIG)

"Quality journalism wouldn't just expose disinformation, but also highlight actors involved in the production and spread of it, so that the public is well aware about those who try to exert undue influence on their political decisions." (Sadaf Khan, Media Matters for Democracy, Pakistan)

"Journalism is not separate from the sociopolitical and economic contexts. It is important to draw a stronger link between those who work in journalism and civil society as well as power holders to appreciate the value of journalism in political processes. We need to assert the importance of good journalism to help people make sense of the various competing interests and stands." (Gayathry Venkiteswaran, APC individual member, Malaysia)

"A major problem of contemporary democracies is the loss of ideological debate and healthy political debates. Elections and voting are increasingly reduced to meaningless acts of delegating power to those who can afford the costs of an electoral campaign. Income-driven, one-sided, manipulative journalism has contributed to this. It is time to reverse this trend. Journalism should reclaim its watchdog function in the public interest against the wave of manipulation and propaganda." (BlueLink, Bulgaria)

"Journalistic independence is a direct indicator of the level of democracy in a specific region or state. Brave and free-minded journalists are as important for our lives as the trees around us that enable us to breathe without us noticing it. We owe them a lot and we must support them and protect them as much as we can." (Karel Novotný, APC membership and network building coordinator).

We'll be sharing these and more voices from the APC community, along with a diversity of sessions and events taking place around World Press Freedom Day, as part of the #WPFD2019 campaign on social media. Follow us on Twitter (@apc_news), share your thoughts, and celebrate press freedom worldwide with us.