This piece was originally published by APC Member, CIPESA.

In September 2020, our research on the State of Internet Freedom in Africa established that the ultimate effect of the measures instituted in fighting COVID-19 was that they had deepened the democracy deficit in several African countries. This was because, increasingly, more states in the region had fallen short of living up to their citizens’ democratic expectations as they implemented measures to fight the pandemic.

Prior to the COVID-19 pandemic, Sub-Saharan Africa (SSA) was faring badly in its democratic credentials, fighting for bottom position with the Middle East and North Africa (MENA) region. Of the 44 African countries included in the Economist Intelligence Unit Democracy Index for 2019, half were characterised as authoritarian regimes and many of the others were semi-authoritarian.

As anticipated, it has gotten worse. According to the Democracy Index for 2020, the number of authoritarian regimes in Sub-Saharan Africa last year rose from 22 to 24 – more than half of the 44 countries in the region that the index covered. Burkina Faso and Mali were the new entrants to the unsavoury ranks of authoritarian regimes. Many Sub-Saharan African countries are concentrated at the bottom of the index, and the region boasts just one “full democracy” – Mauritius. During 2020, 31 countries in the region were downgraded, eight stagnated, and just five scored better.

“After experiencing two consecutive years of significant setbacks, democracy in Africa appears to be in a perilous state,” notes the index. The region’s overall average score “fell to by far the lowest score for the continent since the index began in 2006.” The fight against COVID-19, muddled and stolen elections, and insecurity (including Jihadist insurgencies in west Africa), all played their part in the democratic regression experienced in the region.

As is shown in the 2020 edition of the State of Internet Freedom in Africa report, a plethora of regressive measures were introduced in fighting the pandemic, and they had starkly undermined democracy, marked by a dwindling respect for rights to expression, information, assembly, and privacy. In many instances, these measures resulted in a lower level of stakeholder engagement in public affairs and a decline in governments’ transparency and accountability.

Deepening the Democracy Deficit: The democratic regression in a number of countries in the region could persist beyond the COVID-19 crisis, unless the measures imposed are reversed and deliberate efforts are taken to promote greater respect for fundamental rights and freedoms.

While the Arab Spring was a turning point on digital rights in the region, COVID-19 could be another profoundly negative watershed moment. The Arab Spring, during which social media aided organising against autocratic regimes, some of which were overthrown, opened the eyes of many African authoritarian regimes to the power of digital technologies, and they went ahead to make laws to prescribe cyber crimes, to enable interception of communications, to control use of online platforms, and they started instituting measures such as website blockages, censorship of short messaging services, and disruption of networks. (State of Internet Freedom in Africa 2020)

According to the index, world over the biggest regressions during 2020 occurred in the most authoritarian countries, where regimes took advantage of the global health emergency caused by the coronavirus pandemic to persecute and crack down on dissenters and political opponents. 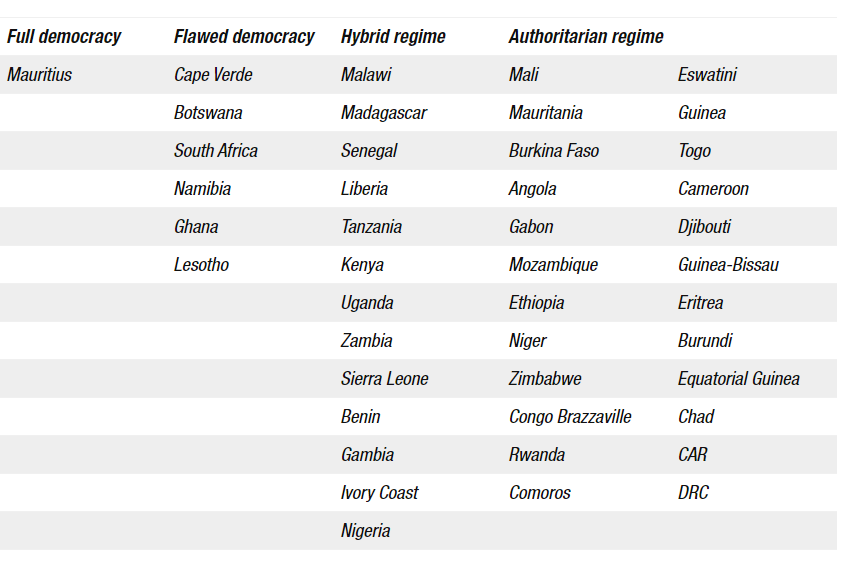 The index states that the decline in Africa’s overall democracy score in 2020 was partly driven by coronavirus-related lockdowns, which had a negative bearing on civil liberties, including stripping citizens of their freedom to assemble and travel, and causing severe interruption to livelihoods. There was high-handedness of the police in enforcing curfews, in such countries as Nigeria (where police killed people in enforcing the lockdown), Kenya and Senegal.

Africa’s deterioration was also precipitated by declining scores for many countries in the category of electoral process and pluralism, with disputed elections in Tanzania and Guinea cited as examples. Of note, Malawi’s standing improved on account of a smooth election held during the year, in which the incumbent president was defeated by an opposition candidate.

Yet some countries saw COVID-19 as an opportunity to stifle opposition campaigns during election times. The index states: “Constraints placed on political activity – applied disproportionately for the opposition – ahead of January 2021 elections in Uganda illustrated how autocrats use the excuse of new threats such as coronavirus to crack down on the opposition and hold on to power during a time of crisis.”

COVID-19 control measures have chipped away at many of hallmarks of a democratic society, such as the ability by citizens to participate in civic matters and the conduct of public affairs. In the countries where civil liberties have been eroded the most, growing hostility of governments to dissenting opinions, including on their handling of COVID-19, has contributed to the adoption of stringent measures and the enactment and enforcement of repressive laws on surveillance, fake news and criminal defamation and practices such as legal threats, intimidation, arrests, detentions, prosecutions, and state surveillance.

These measures have, in turn, forced human rights defenders, journalists, activists, the political opposition, and ordinary citizens to self-censor, disengage from participating in public affairs, and refrain from exercising their rights to participate online and offline. This has been the case in countries such as Zimbabwe, Tanzania, Uganda, Burundi, Egypt, Rwanda, Ethiopia, Morocco, Kenya, and Algeria. Yet, in the absence of engaged citizens, the respect for human rights, including the rule of law, suffers. Such a trend, if left unchecked, could persist well beyond the coronavirus crisis.

While COVID-19 could have served as a driver towards improving access and use of Information and Communications Technology (ICT) in Africa, it has potentially widened the digital divide on the continent, yet for the most part the actions of many governments have undermined, rather than promoted, greater access and affordability of digital technologies.

Although technology can play an important role in containing the pandemic, its application should not violate human rights. In most countries, the measures introduced to check the spread of COVID-19 were necessary to address a public health emergency, but some were applied beyond the intended purpose, and need to be revised to imbed human rights principles. As it is, the imposition of unregulated, unchecked and excessive emergency measures by governments in collaboration with non-state actors during the pandemic period raises fundamental questions on their commitment to protecting digital rights. Thus, the debate about the ethics and legality of measures undertaken, and the extent of the associated risks, is imperative in resetting digital rights amidst the COVID-19 fallout.

See more of CIPESA's work on the impact of COVID-19 in the African digital rights and democracy landscape.