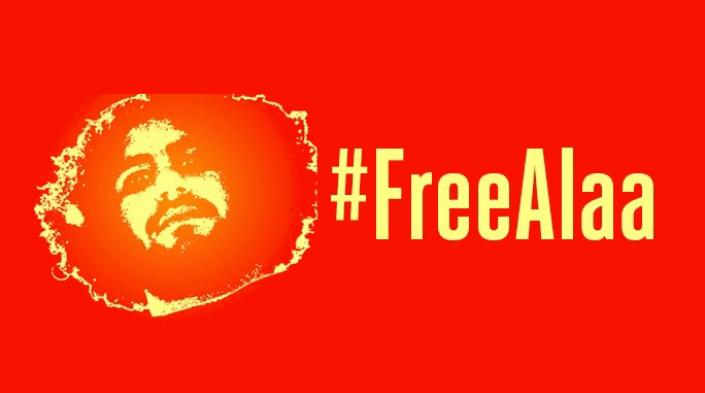 Update: On 10 October, Alaa was able to inform his lawyers, and put it officially on record, that he has been beaten, threatened and robbed at the Tora Prison. He was told if he spoke out it would become worse, and faces the risk of further beating and torture. In the words of his family, "Alaa decided, as always, not to be silent. We, now, must do our part."

At the Association for Progressive Communications (APC) we are alarmed at the crackdown on Egyptian civil society, which has intensified over the past weeks amidst demonstrations calling for President Abdel Fattah al-Sisi to resign. According to the Egyptian Center for Economic and Social Rights, approximately two thousand Egyptians have been arrested, including prominent human rights defenders, lawyers and writers, as well as citizens exercising their right to protest. Authorities have also restricted access to internet services and blocked news and political websites as part of the crackdown.

Among those arrested is software developer and activist Alaa Abdel Fattah, a friend of APC and longtime advocate for human rights and social justice in Egypt and elsewhere. Alaa was released from prison six months ago after serving a five-year sentence for violating a protest law. Upon release, Alaa was subject to harsh probation conditions, which required him to report to a police station at dusk for 12 hours with no access to his phone or laptop. Alaa used the hashtag #Half_freedom to raise awareness about his probation conditions. His half freedom was reduced to zero when he was re-arrested at the police station on 29 September.

"Finding words to respond to the pain and fear his mother, sisters, friends and son must be feeling is very difficult,” said Anriette Esterhuysen, senior advisor on internet governance, policy advocacy and strategic planning at APC. “And it is deeply concerning that so-called rights-respecting states do not appear to be responding with serious intent to these arbitrary detentions,” she added.

Since President al-Sisi secured a second term in March 2018 and amid questioning of the electoral process, Egypt's security forces have escalated a campaign of arrests and intimidation against political opponents, peaceful activists, bloggers and others voicing criticism of the government. The crackdown also includes lesbian, gay, bisexual and transgender (LGBT) activists, artists and alleged or self-described atheists. Restrictions continue against peaceful public gatherings, as well as an ongoing smear campaign against human rights groups. According to Human Rights Watch, the government and state media have framed this repression as part of a strategy to combat terrorism. Authorities have placed hundreds of people and entities on the country’s terrorism list and seized their assets for alleged terrorism links without any hearing or proper due process.

The parliament issued restrictive laws that curtail freedom of speech and access to information even further. In August 2018, al-Sisi signed the regressive Anti-Cyber and Information Technology Crimes Law (Cybercrime Law), which extends government control over the flow of information online, shrinking space for public debate and authorising mass surveillance.

Crackdowns on civic space are also taking the form of increasing internet restrictions. This is no coincidence. Part of what sparked the protests was the posting of videos that exposed alleged government corruption to Facebook by Mohamed Ali, a former army contractor who now lives in Spain in self-imposed exile. As Global Voices reported, starting on 21 September, Twitter and Facebook Messenger became intermittently inaccessible on local internet service providers Telecom Egypt, Raya and Vodafone. Secure messaging applications Signal and Wire were reportedly blocked starting on 26 September. NetBlocks also documented disruption to these services and a number of news sites.

“Intentionally disrupting access to internet services, which people rely on to access information, organise, communicate and document abuses by the authorities, is inconsistent with international human rights law, and must cease immediately,” said Deborah Brown, APC’s global policy advocacy lead. “History should serve as a lesson that cutting Egyptians off from communicating with the world won’t diminish their will and their right to protest peacefully,” she added.

APC urges the Egyptian government to: