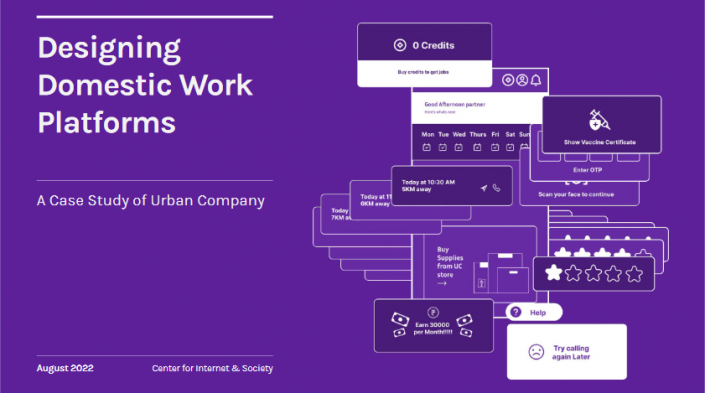 According to the International Labour Organization (ILO), there are between 20 million and 80 million workers engaged in domestic work in India. Domestic work has traditionally been an informal sector with customers and workers depending on local and community networks to be connected with each other. Over the last few years, digital platforms have gained ground in connecting domestic workers with tech-savvy urban dwellers. These platforms promise customers the ease and convenience of moving yet another aspect of their lives online, while they promise to give workers more flexibility, control over their time and promise increased earnings.

However, the authors of this report show that this introduction of technology brings with itself the same problems that haunt other sectors of platform-mediated gig work. On-demand platforms seek to exert control over most points of the service delivery process, including job distributions, client selection, worker pay and performance evaluation, all the while relegating workers to an independent contractor status.

Physical design of public spaces has been known to actively discourage vulnerable populations from spending time there in the form of “hostile architecture”. The literature on the effects of the design of virtual platforms and processes for digitally mediated domestic and personal services work is comparatively sparse. This study seeks to investigate aspects of platform design that directly affect how workers experience their workplace.

Complaints about lack of control of their own time; unpredictable algorithms; unrepresentative evaluation metrics (like rating systems) that unfairly favour customers; workplace surveillance tools that harvest data to control workers’ behaviour and often actively detract from the work being done; a lack of channels to resolve workers’ grievances come up over and over again across sectors of digitally mediated work, including ridesharing, delivery and freelance knowledge work.

In addition to these, domestic workers on digital platforms have to contend with their own unique contexts and challenges. Domestic workers in India largely belong to structurally oppressed gender and caste identities that also intersect with socio-economic marginalisation. Low levels of education and digital literacy exacerbate the information asymmetry between workers and platforms, depriving workers of the tools they need to understand platform operations. Existing social inequalities in the sector are replicated and exacerbated by tools like filtering and rating systems that are easily influenced by pre-existing biases and stereotypes. Previous work also shows that workers are subjected to multiple modes of increased surveillance, not just as gig workers but also as Dalit, Bahujan or Adivasi women. This increased surveillance offers no help to them and is often used to entrench existing power relations. Finally, workers are left with no control over data that they produce. These conditions are common across the global South, as work done in South Africa and the Philippines shows.

For this report, the authors set out to find how workers and customers navigate the introduction of technology into the domestic and personal services work sector, which in India has historically functioned through informal word-of-mouth networks and employs people largely belonging to structurally marginalised communities. They drew from existing narratives of worker experiences in various sectors to identify common challenges that workers face while interacting with platforms, and the technological choices that perpetrate these challenges.

This research was conducted by the Centre for Internet and Society (CIS) with funding from APC through the Feminist Internet Research Network (FIRN), supported by International Development Research Centre (IDRC).