“Let the mob do the job”: How proponents of hatred are threatening freedom of expression and religion online in Asia

Home / Publications / “Let the mob do the job”: How proponents of hatred are threatening freedom of expression and religion online in Asia 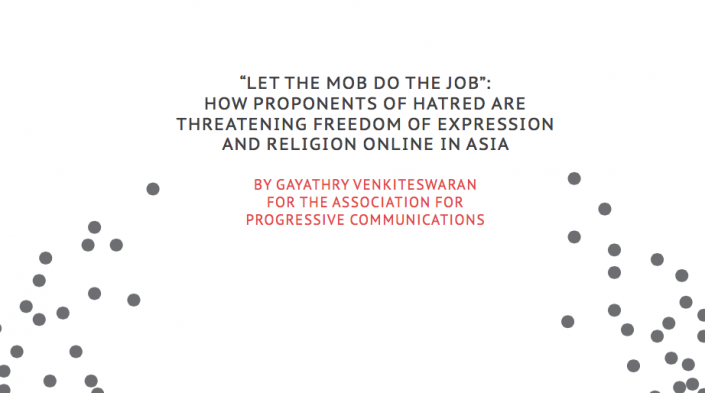 Much of the studies on hate speech use legal analyses and focus on the speaker. While this is important to any understanding of incitement to hatred and violence, it does not always capture the sociopolitical and historical developments that could explain why we are witnessing serious consequences of speech that does not necessarily meet the threshold or definition of hate speech, or the lack of interventions to prevent hate speech. As such, this report expands the scope to suggest a multi-layered analysis that considers political, economic and social structures, the impact of inequalities in societies and individual agency.

Religion and expression are at the heart of much of these developments, as rights to be protected and as tools for discrimination and suppression, as well as their politicisation in public affairs. International human rights standards provide the overarching framework for the subject, against which national legislations are discussed. A major concern is how the latter have created “enabling environments” for violence to be perpetuated with impunity in the name of religion. These are also explained by political histories, among which the idea of the post-colonial nation remains a source of fractures and conflicts. They are part of the stories of Qandeel Baloch and Mashal khan in Pakistan, of Xulhaz Mannan and Dr. Avijit roy in Bangladesh and of the victims of the communal riots in India, killed for challenging established norms by expressing their diversity.

The research reveals a number of trends that point to well-organised targeted attacks, not spontaneous, committed in the name of defending religion in these countries. They also include the use of manipulated online images and messages to mobilise protests (both online and offline). In certain cases, internet users are trolled when they challenge the establishment, resulting in subsequent cyberbullying or profiling as potential targets of attacks. The remedies available for those who are threatened are limited. These can include reporting online abuse to service providers, although that does not stop other users from continuing with the abuse; using counter narratives against trolls and online abuse, but these only affect the dominant voices; or resorting to UN mechanisms to bring international attention to the issue. The responses from states have been disproportionate – blanket bans on internet access to prevent the escalation of violence, which restrict the enjoyment of other rights, and the use of laws against those who are accused of insulting religion.

Addressing the challenges faced in the exercise of freedom of expression and religion online in these countries will not be easy. Much of the work will hinge on the transformation of the political, social and economic structures that currently put certain segments of society at a disadvantage. In the meantime, steps can be taken by governments, political leaders and civil society to denounce the perpetrators of violence and to remove anti-blasphemy statutes. It is high time that governments that condone intolerance were called out and pressured to implement recommendations from UN mechanisms (such as the Universal Periodic Review, the human rights committee, the special rapporteurs) and the Rabat Plan of action to effectively combat incitement to discrimination and hatred. Other stakeholders such as the private sector, civil society, lawyers and judges, national human rights institutions (NHRIS), the media, the judiciary and law enforcement agencies should also play their part to defend the rights to freedom of expression and religion online.