Routing for Communities: An online film festival about community networks and people decentralising the internet for change

Home / News / Routing for Communities: An online film festival about community networks and people decentralising the internet for change 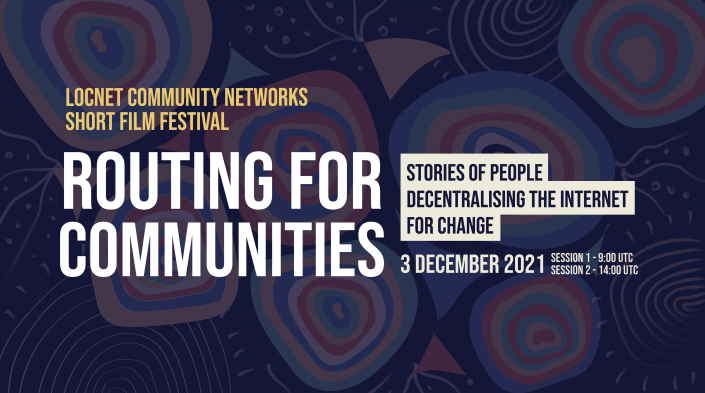 The Local Networks (LocNet) initiative, led by APC in partnership with Rhizomatica, is pleased to invite you to the Routing for Communities film festival, an online screening of short films about community networks and people decentralising the internet for change. Taking place on 3 December, the film festival offers the opportunity to see a series of creative and inspiring short videos produced by communities in Africa, Asia and Latin America. It will also serve as a space for sharing experiences, talking with the filmmakers and learning together.

We will be publicly screening for the first time a series of short films made by communities and organisations, after a process of feedback and exchange with the LocNet initiative for the past few years. We will also present films made by APC members and LocNet partners on diverse experiences with community networks. The films capture the different contexts and initiatives of community networks around the world, exploring both the challenges and joys of their work, and also the relationship between the right to communication through access to communications technologies and other fundamental rights and ways of living.

Join us on 3 December, when 12 short films will be presented in two screening sessions of six videos each, aimed at covering different time zones: one at 9:00 UTC and another at 14:00 UTC. The sessions will also open up the opportunity for dialogue with the filmmakers and/or community members involved in the production of the films. Register to join:

Check out the programme here.

About the Local Networks (LocNet) initiative

Led by APC in partnership with Rhizomatica, LocNet aims to directly support the work of community networks and contribute to an enabling ecosystem for the emergence and growth of community-based connectivity activities in the global South. Support for the production of some of the films and the film festival was made possible through funding from the Swedish International Development Cooperation Agency (Sida) as part of the project "Connecting the unconnected: Supporting community networks and other community-based connectivity initiatives".