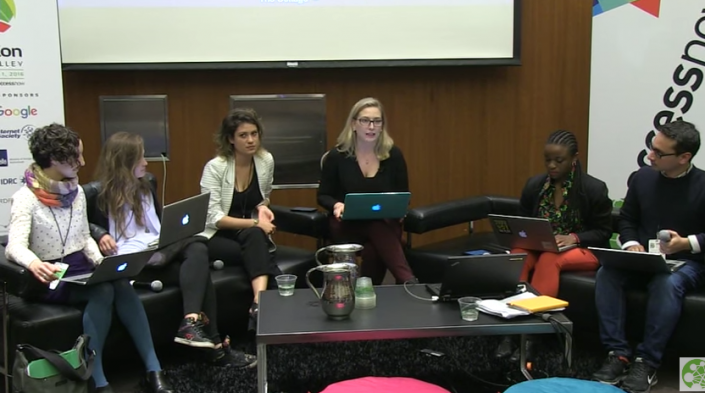 RightsCon is a mandatory meeting point for those interested in promoting the full exercise of human rights online, Valeria Betancourt, APC’s Communications and Information Policy Programme manager, said in regards to this annual event, which took place this year between 30 March and 1 April 2016 in San Francisco.

“While the perspectives of the global South do not yet fully permeate discussions in RightsCon, it is emerging as a space where they can be addressed, discussed and more fully understood, as well as giving rise to specific collaborative efforts and actions,” Betancourt added.

From fighting violence against women online to Uganda’s internet shutdown, freedom of expression and censorship in Turkey, the ISIS threat, or the new UK surveillance bill, RightsCon focused on a diversity of pressing and emerging issues related to internet rights in different countries and regions, all available on the summit’s video archive.

“RightsCon was a great opportunity to connect with activists, journalists and academics interested in the role of freedom of expression and privacy on the internet,” Gisela Pérez de Acha, a lawyer at Chilean APC member organisation NGO Derechos Digitales, said.

Connections and opportunities also took place at side meetings. “The most valuable time for me was time spent on breaks, lunch time and social events, where you could mingle and chat with experts and practitioners willing to share their views and projects,” Roxana Bassi, APC’s GISWatch project coordinator, highlighted.

According to Ariel Barbosa, from Colombian APC member organisation Colnodo, the event could have embraced a greater diversity of topics and interests. “The recurring themes were security, privacy and freedom of expression, but there was very little attention given to a digital right that is equally important, at least from the perspective of APC, which is the right to access,” he emphasised.

He also flagged that some very relevant issues were not covered by the RightsCon agenda. Issues like spectrum were given little attention, despite being crucial to Latin America in terms of the challenges of connecting all the people who still don’t have internet access and are therefore still not particularly affected by the challenges and struggles taking place around other digital rights.

“I would invite the organisers of RightsCon 2017 to stimulate discussion on internet access as a digital right, by inviting organisations working in this area to present papers. Such a valuable space should encourage discussion of issues related to spectrum management in our countries, civil society participation in the national bodies in charge of spectrum management, community networks, etc.,” Barbosa suggested.