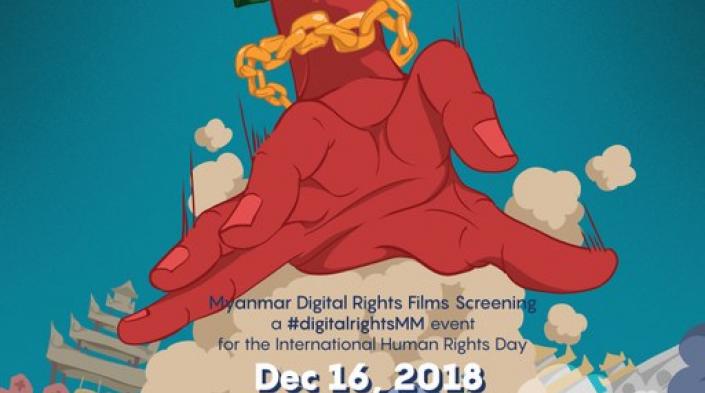 This is a version of an article published by EngageMedia on their website.

To commemorate International Human Rights Day, APC member EngageMedia, along with also member Myanmar ICT for Development Organization (MIDO) and Phandeeyar Innovation Lab, organised a film screening and discussion on 16 December 2018 in Yangon. It featured two short films that showcased the everyday struggles of Myanmar people in exercising their human rights online. The films are the result of a project grant from the Association for Progressive Communications (APC) and the Swedish International Development Cooperation Agency (SIDA).

This work is part of the movement around the Myanmar Digital Rights Forum, which has brought together local film-makers such as award-winning Kyal Yi Lin Six and a diversity of animation and graphic design start-ups such as JOOSK Studios. Both the event and the films come at a critical time, as free speech advocates continue to call for the immediate release of Reuters journalists Wa Lone and Kyaw Soe Oo, who covered the massacre of Rohingya Muslims, a year after their arrest. Organisers hope to raise public awareness, empower people to speak of their struggles in exercising their human rights online and mobilise more people to call for the immediate attention of the Myanmar government in upholding human rights online and offline.

“Are You Ready?” is a film produced by animation and graphic design start-up JOOSK Studios. It narrates how the Article 66(D) of the 2013 Telecommunications Law has been used by military people and political parties to silence dissent against the government.

"There have been no effective changes even though Telecommunications Law was amended in 2017. But there were more than 70 cases under the law. Are You Ready reflects the impact of Article 66(d) and it is very helpful to the Telecommunications Law amendment campaigns," according to Maung Saung Kha, who was among those who were arrested in 2015 under Article 66(D) for creating and publishing a poem online. He founded Athan, an activist organisation that forwards freedom of expression for the Myanmar people, that just recently won the Human Rights Tulip Award.

It's Time to Talk

Directed by award-winning film-maker Kyal Yi Lin Six, “It’s Time to Talk” visits a day in a life of a female journalist, a Punjabi student-activist and a transgender woman who all have experienced harassment in digital platforms. The film tackles how presumed safe spaces online have become areas for discrimination and harassment.

It also outlines possible steps to combat cyber harassment: from changing privacy and account settings on digital platforms to urging key actors to push for changes in culture and behavior.

The Myanmar Digital Rights Forum 2019 will take place on 18-19 January. It  can be followed on Twitter under #digitalrightsMM.