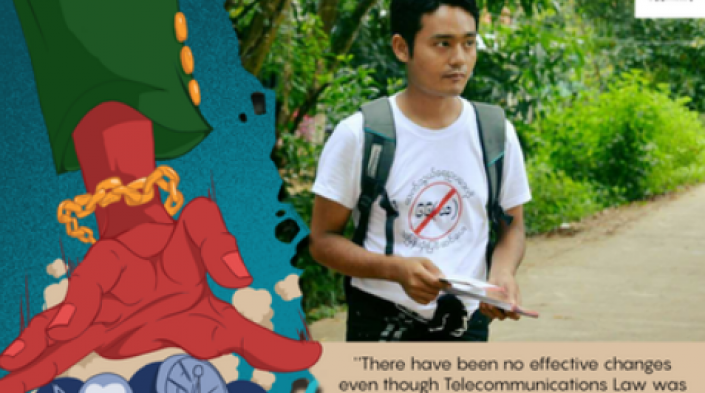 Article 66(D) of Myanmar's 2013 Telecommunications Law, which provides for up to three years in prison for “extorting, coercing, restraining wrongfully, defaming, disturbing, causing undue influence or threatening any person using a telecommunications network,” has had a dramatic impact on free speech in the country. The law is frequently used to silence dissent, and with more than 100 cases filed, its chilling effect on freedom of expression is widespread.

To counter this, APC member EngageMedia, along with fellow APC member Myanmar ICT for Development Organization (MIDO),  launched "Are You Ready?", a short animated film that provides an overview of Article 66(D) by describing its impact on freedom of expression in the country and how people's digital rights are being violated. The film, which was screened at the Myanmar Digital Rights Forum, was made possible by an APC project grant, with support from the Swedish International Development Cooperation Agency (Sida).

"Are You Ready?", produced by animation and graphic design start-up JOOSK Studios, showcases the effects of Article 66(D) on ordinary people and how Myanmar authorities abuse the law to prevent and repress dissent.

The film is part of a campaign to increase the national, regional and international profile of digital rights issues in Myanmar, and foster discussion on these issues among activists, decision makers and media activists and in the film and technology industry. It is backed by education and campaign materials to support the work of campaigners, activists and educators to raise awareness among people and decision makers regarding freedom of expression online and defend against the rollback of rights, including gender-related rights. This work builds upon EngageMedia’s COCONET camp, which brought together over 100 digital rights advocates, artists and communications specialists.

We encourage you to:

EngageMedia is a media, technology and culture organisation focused on the strategic use of video to address critical social and environmental issues in the Asia-Pacific region. It works with independent film-makers, video activists, technologists, campaigners and social movements to generate wider audiences for their vital messages and move people to action. It is part of the APC network.
Myanmar ICT for Development Organization (MIDO) works on ICT for peace. It has developed a diversity of digital security initiatives, monitors online hate speech and develops counter speech, and has produced handbooks on an online peace mobilisation system and social media verification guidelines. It is part of the APC network.