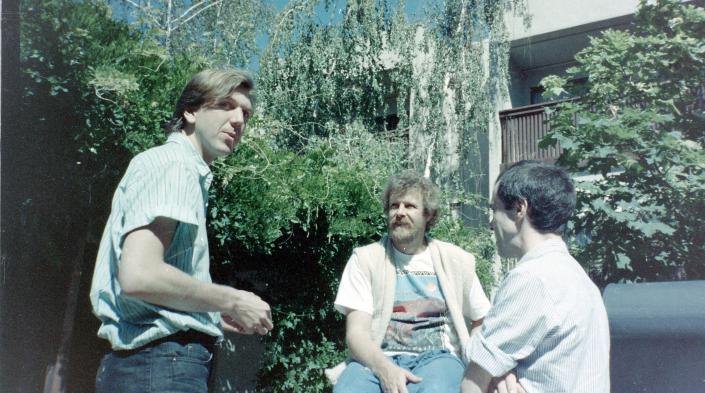 Passionate about communication and the environment, Ian is remembered by friends the world over for his boyish enthusiasm, motivation and vision for a better world. He is also remembered fondly for his friendly, helpful and optimistic nature – Ian was a man motivated by love for his family, friends and the forests he fought to protect.

Sydney-born Ian first moved to the North Coast of New South Wales (NSW) in 1973 to run the 2NCR radio station. His first love had been music, playing the trumpet in numerous outfits, from jazz to classical, in Sydney. In his later years, Ian was known to travel with a guitar during which time his evening soirées were often more remembered than the international conferences Ian had been invited to speak at.

After discovering that the pristine forests of Terania Creek in Northern NSW, which had been a source of personal inspiration and solace, were to be logged, Ian became involved with the Rainforest Information Centre (RIC). It was here that he saw the need to empower community groups working on similar issues to connect with each other, to share information and coordinate, regionally and globally. Ian was excited about the possibility of internet connectivity as a tool to link non-governmental organisations and social change groups right around the world. Such was his enthusiasm that RIC began using email as early as 1985.

In September 1989 Pegasus Networks, considered the first public access internet provider in Australia, was born. It was launched in the rainforest at Terania Creek with a laptop, solar-powered van and modem connected to a cellular phone. Ian joined an embryonic collective of people and organisations around the world creating a computer network that by 1992 had users in 72 countries, far more than the internet did at that time. This was the Association for Progressive Communications (APC), of which Ian was a founding director in 1990.

By late 1989 Pegasus Networks set up an office in the former whaling station and abattoir, the Epicentre, in Byron Bay, from where it provided thousands of Australians with their first email addresses. Pegasus moved to Brisbane in 1992 before being sold to Optus in 1997.

After Pegasus, Ian established a consultancy business (IP Everywhere) to address a growing interest in the internet and new technologies. In this capacity, he worked for the United Nations, with NGOs and not-for-profit organisations around the world, as well as being a consultant for the Commonwealth and Queensland governments of the day.

In later years, Ian travelled extensively as both a consultant, mentor and internet historian within governmental and non-governmental sectors. Ian was a founding member of Internet Australia who had been “deeply respected” by the organisation. Ian was a co-coordinator of the international Internet Governance Caucus and the first Chair of the Civil Society Coordination Group – a coalition of coalitions involved in internet governance issues. He was known both for mentoring diplomats on said governance issues and as a champion of consensus building within civil community spaces, often auspiced by the United Nations.

Ian was never far from the organisations and events that sought to improve internet access and governance. Even since moving into semi-retirement a few years ago to focus more on his edible garden and playing music, Ian maintained an enduring relationship with APC, guest lecturing with the DiploFoundation in Geneva on emerging internet issues and raising concerns about specific social media platforms, more recently the ethics of lethal autonomous weapons and artificial intelligence. Ian also focused on the broader, more complex governance issues despite the harrowing conditions within the international internet arena and the human rights concerns raised there. It is no surprise that Ian’s last post on Facebook linked to an article warning of the platforms’ relentless data harvesting.

The Information Society Innovation Fund (ISIF) Asia, managed by the APNIC Foundation, is preparing to announce an award in Ian’s name, as part of its 2022 grants and awards round.* The DiploFoundation has proposed a conference and award honouring Ian, encouraging essays on the history and value of the internet. Ian’s light, his love and legacy will shine on through all the people he mentored and continues to motivate and inspire the world over.

Ian is survived by his loving wife Sue, step-son Sam, and loving sons and daughter Sean and Brett and Jodie, and his six grandchildren, all of whom he spoke of with love and profound affection.

* UPDATE: The call for applications for the 2022 ISIF Asia grants cycle was opened in mid-March. In 2022, ISIF Asia will also include grants across all three of its thematic areas – Inclusion, Infrastructure and Knowledge – to support innovative solutions to the environmental impact of the internet. The Ian Peter Grants for Internet and the Environment will be made to commemorate the life and work of Ian Peter, internet pioneer and environmental activist. For more information, click here.