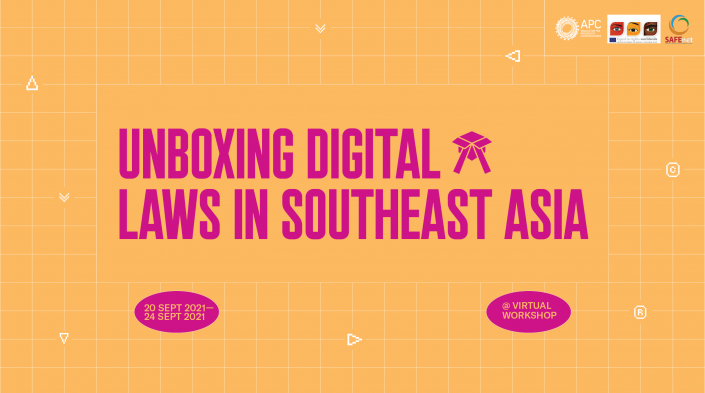 On 20 to 24 September 2021, the Association for Progressive Communications (APC), in partnership with the Southeast Asia Freedom of Expression Network (SAFEnet), conducted the Internet Rules: Unboxing digital laws in Southeast Asia workshop. Twenty-four digital rights defenders from eight countries in Southeast Asia participated in the workshop and collectively learned about laws in the region governing online spaces and technology. The workshop also served as a platform for the participants to engage with experts and resource persons to build their capacities in bringing about impactful change at the national, regional and international level.

Since the participants were from diverse backgrounds with different degrees of understanding about information and communication technology (ICT) laws, the workshop was designed to start from the basic concepts of law, jurisprudence and development of the ICT law ecosystem in the region to give them an opportunity to level off on their knowledge. Therefore, the first day of the workshop, led by Emerlynne Gil, deputy regional director for research at Amnesty International, and Indri Saptaningrum of the Institute for Policy Research and Advocacy (ELSAM), focused on building this important base, with a focus on the history of the internet in Asia and the region’s potential as one of the biggest markets of the internet and related services.

As one participant noted, “I have learned that there are so many countries in Southeast Asia, and we can see how certain laws are made in these countries. Mostly, it’s the people in the government who create the law, but most of the time, we don’t see enough consultations with the citizens and civil society before certain laws are passed and implemented.”

From day two, the workshop focused on specific and important ICT issues that are increasingly being regulated. This started with a discussion on access, telecom policy and network shutdowns that was facilitated by Damar Juniarto, executive director of SAFEnet), and Edmon Chung, CEO of DotAsia. The discussions included why network shutdowns are violations of people’s right to access the internet, with participants noting that internet shutdowns are becoming a popular choice among populist nations to clamp down on dissent and to set the agenda of what information goes out to the public. They also explored key regulations that affect the development of internet infrastructure in the region.

Jamael Jacob, the policy and legal advisor for the Foundation for Media Alternatives and the data protection officer at Ateneo de Manila University, discussed the concepts of privacy and personal data protection, as well as the impact of surveillance and the need for surveillance practices that respect human rights.

As Jacob explained, “We should avoid vague provisions when talking about surveillance. Sometimes, anti-surveillance laws become pro-surveillance laws if we allow national security agencies and law enforcement agencies to get their way in providing definitions for certain terms and words.”

The participants reflected that the right to privacy is a fundamental human right and should be protected by the law at all times.

On the third day of the workshop, the participants focused on dissecting the concept of freedom of expression and how the Southeast Asian region protects this human right through various laws.

Wahyudi Djafar, the executive director of ELSAM, spoke of freedom of expression as an essential element for citizens’ participation in political life and for them to think critically. The participants noted that freedom of expression is a precondition of a truly democratic society and that across the region, governments have been increasingly active in silencing critics and establishing mechanisms for censorship, especially of the press.

While the participants noted that hate speech online is mostly rooted in race, religion, political ideologies, sexual orientation and others, they also observed that governments are responding to this phenomenon by passing new laws to curb hate speech – and these laws are being misused and abused as justification for clamping down on people’s right to freely express themselves online and through other means.

Following these topics, the participants had the opportunity to hear from a panel of experts including Katherine Chen of Facebook’s Oversight Board, Victoire Rio, a digital rights activist, Michael Caster, Asia Digital Programme manager at ARTICLE 19, and Jeff Paine, managing director of the Asia Internet Coalition (AIC), on a wide range of issues related to content moderation and intermediary laws in the region. Participants were able to hear views on diverse aspects, including the international human rights standards on content moderation and intermediary liability, the approaches of civil society in tackling the problems related to content moderation, and the challenges faced by the private sector on the new intermediary liability laws that many countries in southeast Asia have recently implemented.

While gender and marginalised groups were cross-cutting issues that came up throughout the workshop, participants also had the opportunity to hear a feminist perspective on the experience of these groups in relation to ICT laws through a panel discussion with Lisa Garcia (Foundation for Media Alternatives), Siti Mazumah and Nathania Theora (LBH APIK Jakarta), and Biplabi Shresta (ARROW).

The discussions highlighted the importance of scrutinising existing laws that are aimed at protecting marginalised groups and ensuring that they are implemented accordingly. They also centred around the need for public consultations made in connection to the development or updating of these laws as something that should be truly consultative and not conducted merely as a tokenistic process.

To close out the workshop, a session to understand and conduct legal research methodologies was facilitated by Dhevy Sivaprakasam, Access Now’s Asia Pacific policy counsel. This session also had a breakout exercise led by Anna Bueno of Foundation for Media Alternatives and Emilie Pradichit of Manushya Foundation, to help participants practise how to conduct legal research and analysis.

Finally, the participants worked with Edmund Bon, a lawyer from Malaysia and co-founder/director of the Malaysian Centre for Constitutionalism and Human Rights (MCCHR), Nurina Savitri from Amnesty Indonesia and Nalini Elumalai from ARTICLE 19 to analyse what makes an impactful advocacy campaign. They learned how to adopt the best advocacy strategy and design relevant campaigns in relation to their work that will deliver the best results.

Throughout the workshop, participants were invited to share their feedback and reflections on the activities, resource persons and other aspects of the event. Most participants noted that the workshop became a good platform for them to understand the context across the region as a whole, and that it was an eye-opener for them as they realised that different Southeast Asian countries are experiencing highly similar patterns of issues in connection to laws governing the internet and digital spaces.

The participants also shared that the workshop became a bridge to connect them to other advocates and to look for ways to collectively act on issues. The resource persons featured during the workshop also shared their own experiences, which enabled the participants to fully understand the history and background of movements across the region. They also noted that the wiki, a resource database which was made exclusively for this workshop, was quite helpful as it served to not only provide them logistical information such as the schedule and agenda, but also key resources including session presentations, relevant readings for each issue, and reference materials on various ICT laws, policies and forums, which could be used far beyond the workshop.

Commenting on the enthusiasm and active participation of the group, Pavitra Ramanujam, the Asia region projects coordinator at APC, said, “We are thankful to have spent this week with you. We have learned a lot and we appreciated that you took our ideas and turned them to better strategies and ways for us to connect and learn from each other.”

Finally, the workshop highlighted the need for more capacity-building initiatives in the region to increase understanding on these important issues and to strengthen the networks among various stakeholders working on issues related to ICTs to collaborate towards developing and advocating for approaches and policies that are centred around human rights.