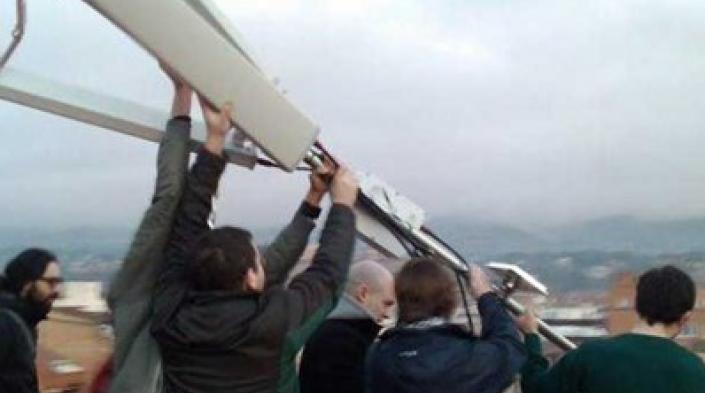 Guifi.net is, in the words of its members, a bottom-up, citizen-driven technological, social and economic project with the objective of creating a free, open and neutral telecommunications network. The Guifi.net project puts in practice a disruptive economic model based on the commons model and the collaborative economy, in which volunteers, small and medium-sized enterprises (SMEs) and public administrations cooperate to build and operate sustainable common-pool network infrastructure. As of December 2016, Guifi.net accounted for more than 32,500 operating nodes, serving over 60,000 people, and more than 20 internet service providers (ISPs). In March 2017, it became the newest member organisation in the APC network.

APCNews: The Guifi.net project puts in practice a disruptive economic model based on the commons. What are the biggest challenges you have faced?

Guifi.net: Internally, the most challenging issue has been to convince ISPs of the need to reinvest to make the ecosystem sustainable. This has involved, for instance, the development and implementation of a system of sanctions, which was the only one of Elinor Ostrom’s principles for managing a commons that we hadn’t implemented yet. Externally, we’ve had to fight against preconceived ideas and prejudices on the part of public employees, the regulator, etc.

APCNews: You are based in Barcelona. Is there something particularly promising/challenging about the Catalonian context?

Guifi.net: Yes and no. Catalonia has a very long tradition of associativism, which maybe made it possible to make it happen in Catalonia first. But now that we know that the model works, I do not see any objective reason that impedes it from being replicated worldwide.

APCNews: How do you work with SMEs and public administrations? Have you faced resistance? What has the response been so far?

Guifi.net: The main problems we have faced are precisely in these areas. One specific example is the obedience of some of the members to the Spanish regulatory board; they are anything but neutral. Another is the Mafia practices of some public employees and elected politicians to preserve some private interests.

APCNews: Can you give us an example of a successful initiative or project your work has helped advance?

Guifi.net: The Garrotxa case is a good one. Garrotxa is a rural county in the Pyrenees. A few years ago the CEO of the local development agency considered promoting Guifi.net as a means to fight the lack of coverage many of his fellow citizens were facing. The reaction of the incumbent was to contact the president of the agency’s board, instead of the CEO, and promise him that in a year they would have deployed fibre all over the county. That promise was sufficient to deactivate the CEO’s initiative to actively collaborate with Guifi.net.

Five years later, the president was facing a problem: most of the county was still underconnected. So he contacted the CEO. In fact, the only well-covered location was the county’s capital, that is, the most profitable area. The CEO reminded the president that five years earlier, he had recommended collaborating with Guifi.net, but he had received political instructions not to do so. So yes, he was keen to tackle the underconnection problem again, but only under one condition: the full support of the board for a year. Notice that this did not imply a budget. Now we are in the second year, which means that the commitment by the board has been renewed. More than half a million euro have been raised and there are four local SMEs deploying fibre every working day. The expectations are that in another year and a half, the whole county will be covered.

APCNews: In 2015 you received the European Broadband Award from the European Commission. Can you tell us what this award has meant, for example, how it has helped advance your work?

Guifi.net: Acknowledgement by third parties is a tremendously powerful tool, if well used. After the award, no public employee or politician dared to say publicly that we are illegal anymore. I say “publicly” because we can prove that, unfortunately, privately there are still many authorities who continue to say so. Let’s hope this will improve in the future.

APCNews: Why did you join the APC network? What do you think APC can help Guifi.net with, and how do you hope to contribute to the work APC does?

Guifi.net: We’ve known and admired APC’s work for a long time, but we didn’t have sufficient human resources to join the network until last winter. It was thanks to the efforts of our friends Leandro Navarro from Pangea (an APC member since 1995) and Karel Novotny (APC’s network and membership building coordinator) that we applied to become a member.

We had already collaborated with APC in the past through our shared interests and activities. Now that we are APC members, we expect to contribute to reinforcing its community network-related activities. We believe it will be a win-win relationship.