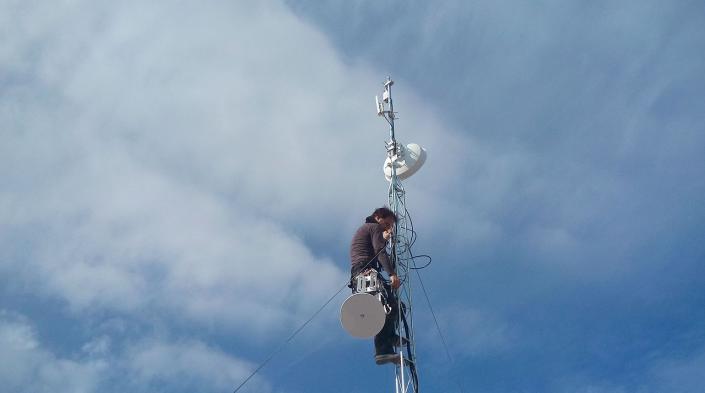 The race towards 5G technology is generally oriented towards new speeds and services, but there is a fundamental aspect that tends to receive less attention: the need for new generation services to be accessible and affordable for everyone. And it's precisely on this issue that an APC member in Barcelona is focused: Guifi.net, a free, open and neutral telecommunications network. Given the tendency towards centralised planning by commercial operators, in the Guifi.net model, the communities themselves build their own horizontal and decentralised networks, on the basis of an interconnection agreement between participants.

During the Mobile World Congress 2018, it was announced that Guifi.net will be responsible for developing 5G network architecture focused on access and affordability in a community in Tarragona, Spain. This will take place through the RIFE (aRchitecture for an Internet for Everybody) project, which forms part of the H2020 European financing framework. We discussed all of this with Roger Baig, a Guifi.net member.

APCNews: What does 5G network architecture mean for Guifi.net and how do you plan to develop it?

Guifi.net: What does it mean? When well managed it’s undoubtedly an opportunity towards improving the connectivity of those already connected, but also, and this is very important, in making progress towards connecting up those who still aren’t connected. But at the end of the day, it’s an opportunity to advance towards the democratisation of connectivity. Badly managed, it also offers an excellent chance for big industry to strengthen its oligopolies, and thus continue to expand the digital divide (better connection only for those who can afford it), extending technology in those areas that are deemed profitable.

Obviously we’d like to develop it to enhance everything that may favour improvement in equality in terms of connectivity (coverage and the quality of access) and design ways of preventing monopolistic and speculative practices. The greatest burden falls on technology management, that is, legislation, regulation and public policies. However, much can also be done from the point of view of technical design, and a lot more than people sometimes want to admit.

APCNews: Why was Tarragona chosen for this pioneering test?

Guifi.net: A call was made to the community to offer proposals to host its deployment based on certain requirements: seven proposals were presented, two finalists were selected and finally Tarragona was chosen on the basis of a decision taken by the RIFE project consortium.

Guifi.net: I quite like Wikipedia’s definition on this. Now that we have some experimental data to work on, I can make a few comments on the state of the technology based on the results obtained both in the laboratory of the Polytechnic University of Catalonia (UPC) in Barcelona, and on the ground following deployment in Tarragona, where around 40 houses were connected up. The backbone network is quite stable and users can access virtually all internet services transparently. It’s a great achievement as it’s the first time that ICN technology has been used in real cases with end-users. The immediate challenge in the future is how to maintain the experimental deployments we have made during the project once it’s wound up in March 2018, so that we’ll be able to exploit them as much as possible, as they have a huge potential for experimentation: we can easily add and remove users to the ICN network, and we have numerous resources on which to automatically run experiments, to name a few. But for now, what seems clear is that at least the collaboration between InterDigital and Guifi.net won’t stop with RIFE.

APCNews: And what else are you working on?

Guifi.net: As always there are many more things and projects to focus on than the capacity to work on them (the well-known problem of the limits of the human bandwidth). But I can tell you about the most important projects that I can think of right now, although there are plenty more I could mention:

You can find out more about the RIFE project here, and about Guifi.net here.