Enabling digital inclusion for the most vulnerable in 2021

Home / News / Enabling digital inclusion for the most vulnerable in 2021 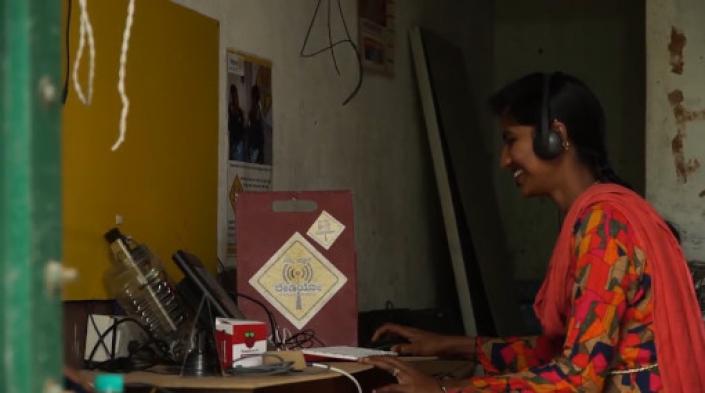 In 2021, we worked to create the conditions for people affected by exclusion, discrimination and inequality to be able to meaningfully use and shape the internet and digital technologies to meet their specific needs.

Through institutional strengthening efforts, several communities previously working in isolation now can identify other people working in similar conditions in the global South. The same communities are reaching out to meet and collaborate on projects. Some examples: APC member in Colombia, Colnodo, helped another member, Sulá Batsú, to set up a women’s community network in Costa Rica.

Women in Kenya and Malawi met up to discuss how the Feminist Principles of the Internet apply to community networks. The numerous online gatherings organised by APC such as the Local Networks online convening, the tech-talk webinars and the Routing for Communities Film Festival were also an opportunity for people from Africa, Asia and Latin America to exchange experiences and learnings in 2021.

By sharing knowledge and thinking together about how to build and strengthen community networks, around 35 communities are joining the National Community Networks Schools, the first of their kind, taking place in five countries: Brazil, Indonesia, Kenya, Nigeria and South Africa.

The National Schools are a collective capacity-building and strengthening effort for the creation, development and consolidation of community networks as a way to cultivate bottom-up, sustainable approaches to communication and meaningful connectivity.

Between the preparations in 2021 and until January 2023, each school is adopting its own timeline and programme, shaping the processes according to local needs and interests. In addition to being a learning powerhouse, each school seeks to be a multiplier of community-led initiatives, bringing together people from different communities around the country and fostering collaboration with other organisations acting towards a locally led approach to digital inclusion.

This approach is leading to strong movement building at the national level. Other organisations have expressed interest in organising a national school of community networks in other countries as well, such as in Tanzania, India and Malawi.

Successfully advocated for policy change on digital inclusion in Kenya, Zimbabwe and Ethiopia

This is particularly the case in Kenya, where APC and its member KICTANet assisted the regulator in creating a new licence for community networks. As a result, in November 2021, the Communications Authority of Kenya adopted a Licensing and Shared Spectrum Framework for Community Networks after holding a public consultation in the country and promoting a process that allowed the development of the framework in partnership with multiple stakeholders.

In Zimbabwe, Murambinda – a “growth point” area established in the early 1980s in the Buhera district – was home to the launch of the first community network in the country in May 2021. Since then, some important achievements were made with APC’s support in terms of creating participatory processes and multistakeholder dialogue: the country has already had its first national conference on the topic and is discussing the creation of community network committees in provinces throughout Zimbabwe, hoping to multiply this kind of community-led approach to provide internet access. This would lead to concrete support for many community networks to emerge and grow in 2022.

Played a key role in building a community networks movement at the global and regional levels, which led to a renewed recognition of this alternative in international spaces and processes

In 2021, APC established partnerships to make significant contributions to broadening the community networks movement. With direct advocacy by APC, this has resulted in a renewed recognition of community networks at the International Telecommunication Union (ITU) level and other global spaces and processes, by ensuring the incorporation in documents of language that was accepted and amenable to community-centred connectivity solutions.

By working with highly respected organisations and individuals advocating for community networks in different forums, such as the ITU, Mozilla, DSA, LIRNE, Connectivity Capital, Research ICT Solutions, as well as a movement among women in community networks, APC reached positive steps in introducing favourable wording in global reports and recommendations, which are now available for civil society to advocate at the regional or national levels for enabling policy and regulations.

An open call led by APC and Rhizomatica received 96 applications from initiatives and projects directly engaged with existing or new community networks around the world. The 2021 Community Network Grant Programme selected 17 projects to be supported in different countries (six from Africa, six from Asia and five from Latin America).

A capacity and movement building mentorship was also created with the aim of supporting women and gender-diverse, queer and trans individuals to take on leadership roles in community networks advocacy: the Socio-Political Advocacy for Community Networks Engagement (SPACE) programme

Colnodo supported the implementation of a community network for migrants, refugees and the Wayúu Indigenous community in La Guajira, Colombia

Colnodo, with the support of the UN Refugee Agency and the Fundación Hermanos sin Condiciones, and the financial support of the Luxembourg government, carried out the implementation of a community network for internet access to promote the digital inclusion of refugees, migrants and host communities in the Tres de Abril settlement in Uribia, La Guajira, Colombia.

This self-managed community network, which promotes the participation of the Wayúu Indigenous community and the refugee and migrant population located in the territory, enabled the community to access computer services, the appropriation of technologies, and the use and collective management of a wireless community network, with autonomous energy supply through the use of solar panels.

The trust, hope and perseverance of the population of Uribia were fundamental for the design, construction and care of the network, which visibly improves the quality of life of the community’s people, provides educational opportunities to the young and allows communication with loved ones through the internet service.

“Tejiendo nuestros sueños”, as the community network was called, promotes the digital inclusion of refugees, migrants and host communities in La Guajira and seeks to reduce the digital gaps faced by those forced to flee and increase the opportunities for their social integration process. Today, people in the community can think about their well-being and project themselves into new possibilities that they did not think they had before the implementation of the community network.

In 2020, the COVID-19 pandemic led to an inevitable surge in the use of digital technologies due to nationwide lockdowns, while at the same time, many rural and low-income communities around the world lacked reliable and affordable access, which prevented people from having access to a range of digital services – from public health and information to education.

With this in mind and with support from an APC research and campaign subgrant, Digital Empowerment Foundation (DEF) implemented an event-related campaign activity at the Asia-Pacific regional level on "Community Network for Social Good". This campaign was carried out during the 5th Community Network Xchange (CNX), held from 15 to 23 November 2021. CNX is a multistakeholder online event organised by DEF and the Internet Society that brings together community network practitioners and enthusiasts of community-driven internet connectivity to exchange ideas and serve as catalysts for the grassroots connectivity movement.

Within the overall event theme “Community Network for Social Good”, session sub-themes reflected on the importance of community networks in accelerating reach and providing help to communities to respond to COVID-19 and also to benefit from digital opportunities. It also explored the experiences and challenges faced by community networks during the pandemic, such as large-scale misuse and misinformation and challenges to access the right information online.

In March 2021, Law N. 14,109, which regulates the Telecommunication Services Universalisation Fund (FUST), was enacted by the National Congress, after the overthrow of the vetoes of President Jair Bolsonaro. Though regarded as a landmark, the enactment raised concerns from different sectors of society, such as the Instituto Telecom (an entity dedicated to research and studies on telecommunications), which issued a statement predicting the allocation of a significant part of FUST resources to big entrepreneurs in agribusiness and telecommunications, at the expense of public schools and less-favoured populations.

Based on the data mapped by the Free Territories, Free Technologies project, which reinforces the urgency of connectivity policies to solve the inequalities of internet access in rural and traditional communities in the Northeast region of Brazil, Intervozes developed, with the support of an APC research and campaign subgrant, the strategic planning of the campaign Tem Boi Na Linha (An Intruder is on the Line). The campaign asked: "Which internet do we want in communities?"

The plan brought together several digital rights organisations, community communication movements, and traditional peoples and communities that worked in coordination around the struggle for regional and national digital connectivity policies. The project's objective was to identify convergent paths to demand a connectivity ecosystem that guarantees access to rights without giving up the principles of autonomy and the self-determination of territories. The planning had three stages: mapping existing connectivity policies in some states in the Northeast; collecting community narratives about digital connectivity; and consolidating the planning with the members of the articulation “Waves of Resistance” (Ondas da Resistência).