APC at APrIGF: Highlighting the importance of a human rights-based approach to internet governance

Home / News / APC at APrIGF: Highlighting the importance of a human rights-based approach to internet governance 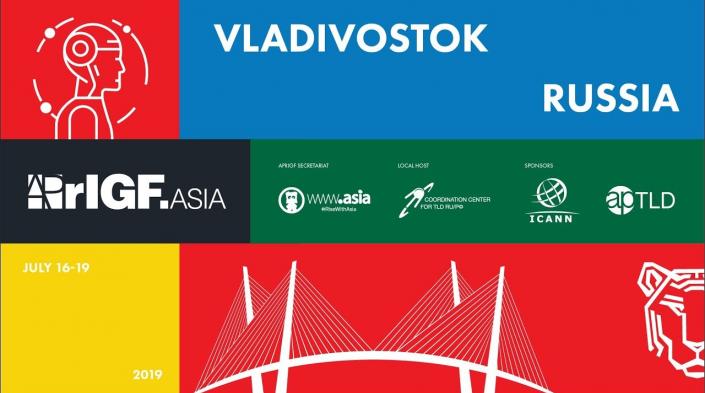 The Asia Pacific Regional Internet Governance Forum (APrIGF) serves as a multistakeholder platform for discussion, exchange and collaboration around internet governance issues at the regional level. At the 10th annual APrIGF, held on 16-19 July 2019 in Vladivostok, Russia, APC and its members played a key role, organising, moderating and speaking at a range of plenary sessions and workshops throughout the event.

The overarching theme of this year’s APrIGF was “Enabling a Safe, Secure and Universal Internet for All in Asia Pacific”, with sessions grouped under a total of six sub-themes: Safer Internet, Cybersecurity and Regulation; Access and Universality; Emerging Technologies and Society; Human Rights Online; Evolving Role of Internet Governance and Multistakeholder Participation; and Digital Economy.

At the “Capacity Building Day” held on Day 0 of the forum, APC’s Asia policy regional coordinator, Gayatri Khandhadai, expanded on the sub-theme of human rights online, and noted that while the internet is an extremely powerful tool for the realisation of a wide range of rights – such as freedom of information, freedom of association and assembly, and the rights to self-determination, participation, education, culture and livelihoods, among many others – access to the internet itself could be considered a human right, as the internet is the result of scientific development, to which everyone has an inherent right.

She also stressed that although the only session on the 2019 APrIGF agenda specifically labelled as falling under the “human rights online” sub-theme was an APC-organised session on online hate speech, human rights online was in fact a cross-cutting theme that could be linked to almost every session and workshop grouped under every other sub-theme throughout the event. “The sub-theme of human rights online is essentially a question of the internet that we want, the kind of environment you want to see on the internet. If you want a people-centred internet, you need to ensure that human rights is at the centre,” she concluded. (Click here to watch her presentation, beginning at 1:51:35).

The right to internet access, and alternative solutions to meet the needs of those who have been denied access until now, was highlighted in the workshop “Community Networks: Connecting the hardest half”. Co-organised by APC and the Internet Society-Kyrgyz Chapter and moderated by APC’s Pavitra Ramanujam, the workshop looked at the experiences of communities who have used a “do-it-yourself” approach to address digital exclusion by owning and operating their own communications infrastructure. APC’s internet access specialist Mike Jensen spoke about APC’s efforts to promote local access solutions, including “Connecting the Unconnected: Supporting community networks and other community-based connectivity initiatives”, a project currently being implemented by APC in partnership with member organisation Rhizomatica. He also presented a recently launched APC publication, Bottom-up Connectivity Strategies: Community-led small-scale telecommunication infrastructure networks in the global South, produced as part of an earlier APC/Rhizomatica project, “Local Access Networks: Can the unconnected connect themselves?”. Ritu Srivastava from APC member organisation Digital Empowerment Foundation (DEF) spoke at the workshop as well, sharing the experiences of community network initiatives supported by DEF in India. (Watch the workshop here, beginning at 2:04:30.)

Another aspect of the right to access to the internet was addressed in a session organised by Access Now and moderated by APC’s Khandhadai: Honey, I shut the internet! Dealing with internet shutdowns in Asia Pacific. In today’s world, where the internet has become a major source of information and an important medium of communication, it is crucial that access to the internet is not disrupted or subjected to regular interference. While shutting down the internet is a major barrier to access and freedom of expression, internet shutdowns also lead to a wide range of consequences including interruption in businesses, hindrance to education, and blockage of access to channels for safety and healthcare. According to the #KeepItOn Coalition tracker that Access Now helps to coordinate, out of the 371 documented internet shutdowns across the world between the years 2016 to 2018, 310 shutdowns took place in Asian countries. The aims of this session were to explore the work done by civil society organisations, technologists and other stakeholders across the region to address this phenomenon, and to build policy discussions to find the best possible way to ensure that the number of internet shutdowns decreases. (Watch the session here, beginning at 1:53:00.)

The potential impact of the internet in violating the human rights of others, particularly the right to freedom of expression, was addressed in an APC-organised session on “Online resistance movements and political organising against and countering hate speech in Asia”. Online hate speech is regularly used to silence and marginalise communities and activists in digital spaces. It serves as a barrier to online freedom of expression, association and assembly by creating a hostile digital environment for the targeted individuals and communities. At the same time, however, acts of resistance and counter organising online against hate speech have positioned online spaces at the forefront of human rights debates. These issues are at the core of a current APC project, Challenging hate narratives and violations of freedom of religion and expression online in Asia. The objective of this collaborative, interactive APrIGF session, moderated by Khandhadai, was to try to unpack what hate speech online is, looking at what makes hate so successful and what can be done to counter it. (Watch the session here, beginning at 17:40).

Khandhadai also served as moderator of another APC-organised session, A roadmap for studying ICT laws and building a database for Asia, aimed at encouraging discussion on the growing number of policies, regulations and laws in Asian countries that seek to monitor and regulate the internet and other information and communications technologies (ICTs). While some of these regulations are much needed and long overdue, many of these laws are in fact vaguely written with scope for misuse, give sweeping powers to governments to surveil and persecute citizens in the guise of national interest, and are increasingly used to stifle online expression, and censor and criminalise speech, resulting in shrinking online spaces and reduced participation in democratic processes. APC member Social Media Exchange (SMEX) has created a workbook that provides a useful framework for analysing the ICT legislation that has been enacted in Asia and will further be using this methodology to develop a database of these laws in the region as part of the CYRILLA project. (Watch the session here, beginning at 7:05:30).

Keeping the internet safe and secure – an integral part of the overarching theme of this year’s APrIGF – was addressed in a workshop organised by APC member Point of View: Digital security at the grassroots: Emerging needs and challenges. Often, some of the best digital security practices do not work with a large section of the population because they do not match up to their specific needs, but there is very little discussion about this in cybersecurity circles. It is important to look at digital security from the usability point of view, to include and bring in more everyday users and not just security professionals and those working on technology, and start from where the users are currently. This session, moderated by hvale vale of the APC Women’s Rights Programme, was aimed at getting these conversations started, and bringing together the work being done in the Asia Pacific region to pull out best practices which can be applied elsewhere. (Watch the session here, beginning at 2:01:00).