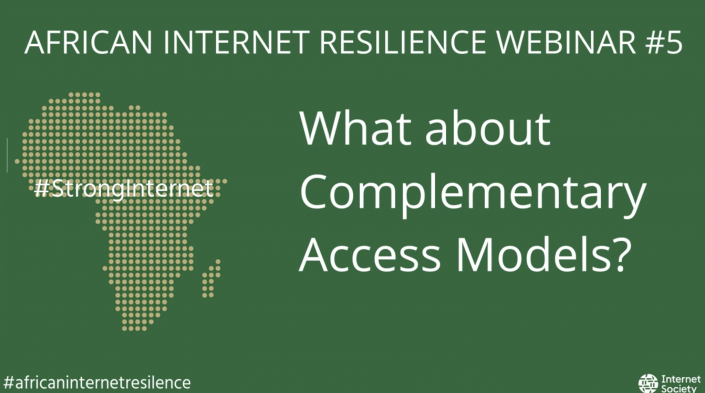 The fifth session of the African Internet Resilience webinar series, organised by the African Union, the Internet Society (ISOC), the African Telecommunications Union, NetHope, Mozilla and the Association for Progressive Communications (APC), took place on 30 July. This webinar was curated by APC and is available here. Moderated by Michuki Mwangi, the focus of the session was to foster a deeper understanding of complementary networks and address the need for internet services in rural and underserved areas. Mwangi introduced the webinar by commenting on his notion of complementary access and comparing it to another widespread type of project in Africa: water supply. “In many places, water is provided through community solutions because existing solutions are not able to provide water to the masses,” said Mwangi. “So we have a community-driven project that is able to provide us with water a couple of times a week, it is reliable, we can depend on it, it is a community that came together, organised itself, and each of us in this area are able to access it.” Similarly, communities are starting to provide internet connectivity by and for themselves.

Moctar Yedaly, head of the Information Society Division of the African Union Commission, opened the webinar. Yedaly spoke of the impact of COVID-19 on confirming the power of information and communications technologies (ICTs), saying that “access to them has become of vital importance”. Yet “despite all efforts made so far by all stakeholders, access to broadband is far from being achieved in African countries.” He then requested the sector to move from “business as usual” and start looking for alternatives for broadband access provision, and more specifically, to consider community-owned networks. When describing the role of policy makers in enabling these models, he reminded the audience of the 2019 Sharm El Sheik Declaration, issued after a session of the Specialized Technical Committee on Communication and Information Technologies held in Sharm El Sheikh last year and attended by all African ICT ministers. The Declaration specifically calls on the African Union Commission to come up with a framework for community-owned networks. He acknowledged that enabling these alternatives entails a shift in culture for many regulators in the way access to broadband was being considered, and hoped that sessions like this webinar contributed to clarify any doubts they may have about the benefits of these models, as well as to assist the Commission with the development of such a framework.

The first panellist to speak was Jason Aproskie, who is currently the principal economist at the Competition Commission of South Africa and led its market inquiry into the high cost of data in South Africa, which finished last year. South African data services are notoriously high, and one of the results of the inquiry was series of agreements with telecommunications operators for a price reduction. Since then, consumers in South Africa have seen a minimum 30% reduction in data pricing, but Aproskie acknowledged that this is not going to achieve widespread affordable access for South Africans. He pointed out that the inquiry found that mobile coverage in South Africa is almost universal. “3G coverage is almost 100% of the population, 4G coverage I would expect today is probably over 90% at the moment, and we have seen 5G introduced recently. When you look at the data, only 50%, 60% of the population, depending on the measure you use, are accessing the internet, accessing broadband services.”

Local governments have implemented a series of public Wi-Fi networks, and some governmental bodies have looked into funding a similar system in poorer and rural areas as well. Connectivity in rural areas has long been an issue and in South Africa, the inquiry demonstrated the importance of community networks in remote areas. Aproskie spoke to this, saying that often “we need to empower the community networks because of the role that they play. Often they provide more affordable access than your typical large national operator who is not focused on that kind of customer.”

The inquiry had three recommendations for South African telecommunications operators. The first was that complementary access models have to be championed by governmental bodies, since regulatory and governmental assistance can facilitate the process and regulate a growing practice.

Another important recommendation was around the finding that “these models need this external expertise to initiate them and to sustain them, despite the challenges they are going to face.” This led them to recommend creating or supporting a body of experts to “give of their time to assist the communities to go through the regulatory burdens, and assist maintaining these projects,” Aproskie explained.

Finally, the third inquiry recommendation focused on spectrum, specifically, reworking the regulations so that spectrum can be used more efficiently and effectively, in rural and underserved areas. Aproskie ended by saying that “community networks are typically not-for-profit and there is no extra cost to the large operators of the spectrum if the community networks were to access this unused spectrum.” This particular topic was the focus of the second session of the African Internet Resilience webinar series.

The next panellist was Josephine Miliza, who is the African regional coordinator for APC’s local access and community networks initiative. She has been involved in the operation of a community network in Kenya and co-chairs the programme committee that develops the agenda for the annual summit on community networks in Africa. Miliza began by commenting on the COVID-19 pandemic, commenting on how it has exemplified the need for universal connectivity. “For a long time, we have been having discussions around the importance of connectivity, but this year, I think, it has really cemented the notion that universal, affordable access should be available for everyone,” she said. Miliza also emphasised the importance of documenting best practices so that newcomers can learn from pre-existing networks and their experiences. “There is a wide community of networks that meet together every year,” she noted, “so I think for me this is creating a movement in Africa where slowly, constantly we're beginning to share experiences, knowledge, expertise from one community to another, building on what others have already done.”

Miliza also referred to the importance of not-for-profits in grassroots organising, which coincides with a rise in women-led movements helping to bridge the digital gender divide in Africa. Community networks provide more than just access; they provide localised, relevant content that is designed with the local context in mind. Miliza referred to this as “a holistic approach to digital inclusion”. Moreover, community networks build socioeconomic structures that support local economies, which can be a difficult process, given the size and remoteness of many African communities in which these networks can be found. Miliza mentioned BOSCO Uganda, which is an organisation that uses solar energy to power their network, as a great access model. BOSCO’s system provides electricity to several connected schools and centres, contributing more than just an internet connection to the community. Miliza ended by saying that there is space for many more community networks across Africa, however, many countries have regulations and licensing costs that are expensive and complicated, which prevents the easy implementation of more networks. In this regard, she concurred with Aproskie's recommendation for governmental bodies designed to deal with issues faced by community networks.

Chako Armant, the third panellist, is the current head of research at La Différence and has been a partner in APC’s local access and community networks initiative. Armant works in the eastern Democratic Republic of Congo in a particularly isolated and underserved area, the island of Idjwi. A local chief recently led the implementation of a broadband network in the area, recognising the value of connectivity. The system has been maintained by Congolese locals, including both people from the island and staff from La Différence, with additional support provided by a team from the United Kingdom. The technology is transported to the island by boats and is set up and run by locals. The network is wireless and provides SMS and voice call services, as well as internet service to local businesses during the day, while the rest of the community can use the community network’s internet connectivity in the evening. This model, said Armant, allows the community to feel connected to the rest of the world, and they believe that they have found a model for underserved and rural communities. Going forward, Armant mentioned that they would like to collaborate with other organisations and learn from each other so that there can be a conducive environment for policy and regulation frameworks for community networks.

The next panellist was Susan S. A. Wegoye, the director of legal affairs at the Uganda Communications Commission (UCC) and a lawyer and advocate of the High Court of Uganda. Wegoye provided an overview of Uganda’s regulatory approach in creating the “communal licence” in its licensing framework. This licence, the first of its kind in Africa, is an option for communities who cannot access services on a commercial basis. The community operator licence is based on the 2018 National Broadband Policy and was incorporated into the Uganda communications licensing regulations of 2019. The communal licensing will cover underserved and unserved communities. Ideally, said Wegoye, these services provided through communal licences will be subsidised. “We are hoping that there will be other support in informal grants and partnerships. That space, it is not a commercial space, it is going to provide subsidised services,” she said.

Victor Asante, the final panellist, is the senior manager of research and planning for the Ghana Innovation Fund for Electronic Communications (GIFEC). Since 2017, GIFEC has connected over 500 rural communities, affecting more than 500,000 people. “During the asset analysis we realised that there is no way we could cover the whole country without the community networks,” said Asante. “So, as the fund mandated to support the establishment of such enterprises, we want to engage the relevant stakeholders to make sure that we're able to establish a continuation of those areas.” Their aim was not to copy an existing model, but rather to create their own approach uniquely fitted to the Ghanaian context, with the primary goal of sustainability. For that, they have established a steering committee including ISOC Ghana, the National Communications Authority, the Universal Service Fund and the Ministry of ICT to develop the community networks strategy and policy. They will leverage existing community-based organisations, such as the Ghana Community Radio Network, which helps them fit community networks into local development strategies at the district level. Asante concluded by stating that GIFEC is also encouraging local assemblies to adopt community networks as part of their development strategies.

For Carlos Rey-Moreno, APC’s representative in the organising committee for the webinars and curator of this session, the event was a success, as it showed “the ongoing growth of the movement of community networks in Africa, with voices from all parts of the continent, including those of public officials, recognising how critical these models are in closing the digital divide, and how they are being enabled.”

The sixth session in the series took place on 13 August and focused on another critical issue for community networks: access to backhaul, and specifically, the role of fibre optic backbone infrastructure in affordable access. A recording of the webinar is available here.