Inicio / Conversaciones de APC / Seeding change: AZUR Développement raises awareness on gender-based violence in the Republic of Congo
“Sensitised people have become aware of the forms and consequences of gender-based violence, can recognise it, reject it and denounce it.”

What impact can 16 days make in the fight to end violence against women? The period between 25 November and 10 December is bookended by two important days recognised by the United Nations: the International Day for the Elimination of Violence against Women and International Human Rights Day.

Since 2006, these “16 Days of Activism Against Gender-Based Violence” have been the foundation for the annual Take Back the Tech! (TBTT) campaign spearheaded by APC and supported by groups worldwide to raise awareness on the dangers of tech-related violence against women. This month, APC launches Take Back the Tech! 2022 through a series of discussions looking at feminist internet constellations mobilising around alternative infrastructure, against gendered disinformation and actions to make our spaces more inclusive.

AZUR Développement is a non-profit organisation based in the Republic of Congo that has been working with APC since 2009 on various projects aimed at eradicating gender-based violence. In November 2021, they participated in a local Take Back the Tech! local awareness campaign that raised awareness among 1,130 women, 1,247 girls, 357 men, 618 boys and 45 health workers about gender-based violence, its manifestations and means of redress.

This is particularly critical in the Republic of Congo, which has some of the highest instances of gender-based violence and human rights violations in the world, as noted by APC over the course of earlier projects undertaken with AZUR Développement. “It is a country emerging from years of armed conflict, which has perpetuated rape and sexual violence as a weapon of war.”

As part of the campaign’s objective to mobilise youth and survivors to speak out against gender-based violence online and offline, AZUR Développement executive director Sylvie Niombo reported that “two survivors testified through articles and audio testimonies.” With the support of the organisation, the survivors publicly denounced the violence they had experienced in two articles published anonymously in national newspapers as well as through audio broadcasts on national radio, generating a great deal of media attention across the country and helping to raise awareness on these critical issues. 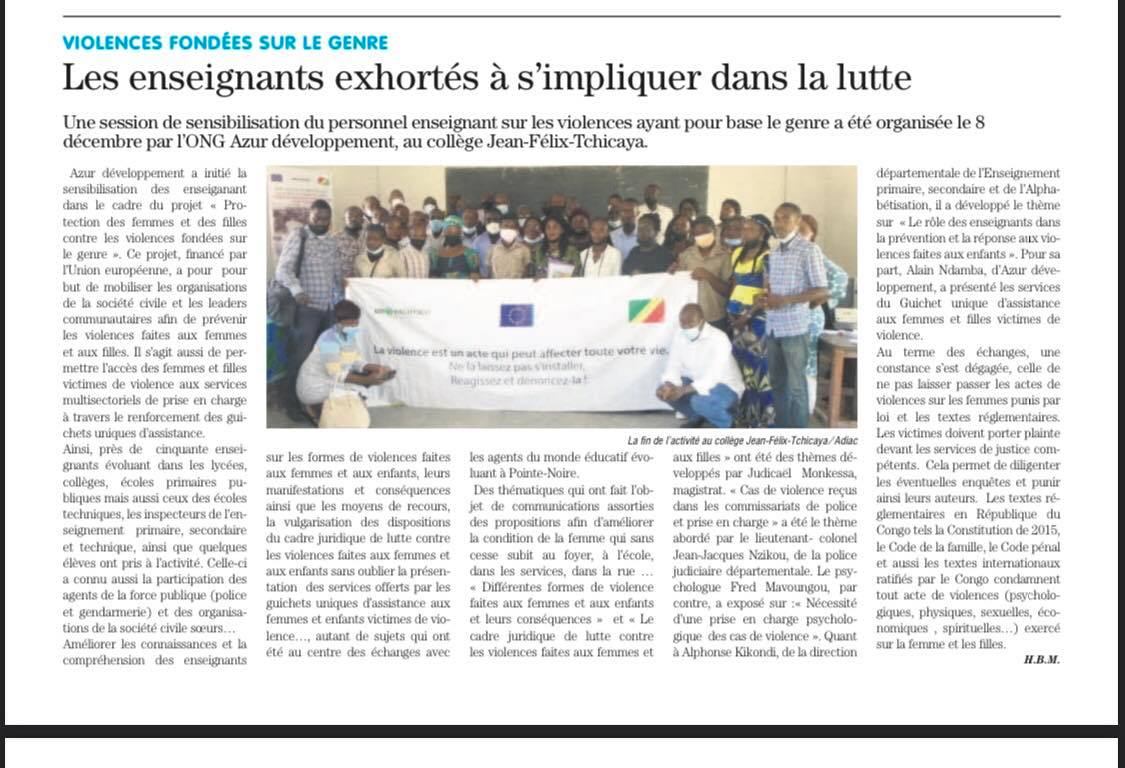 Through writing contests, art challenges and numerous sensitisation and information sessions in four communities, AZUR Développement set out on an ambitious mission to engage as many people as possible in activities geared at raising awareness on gender-based violence. 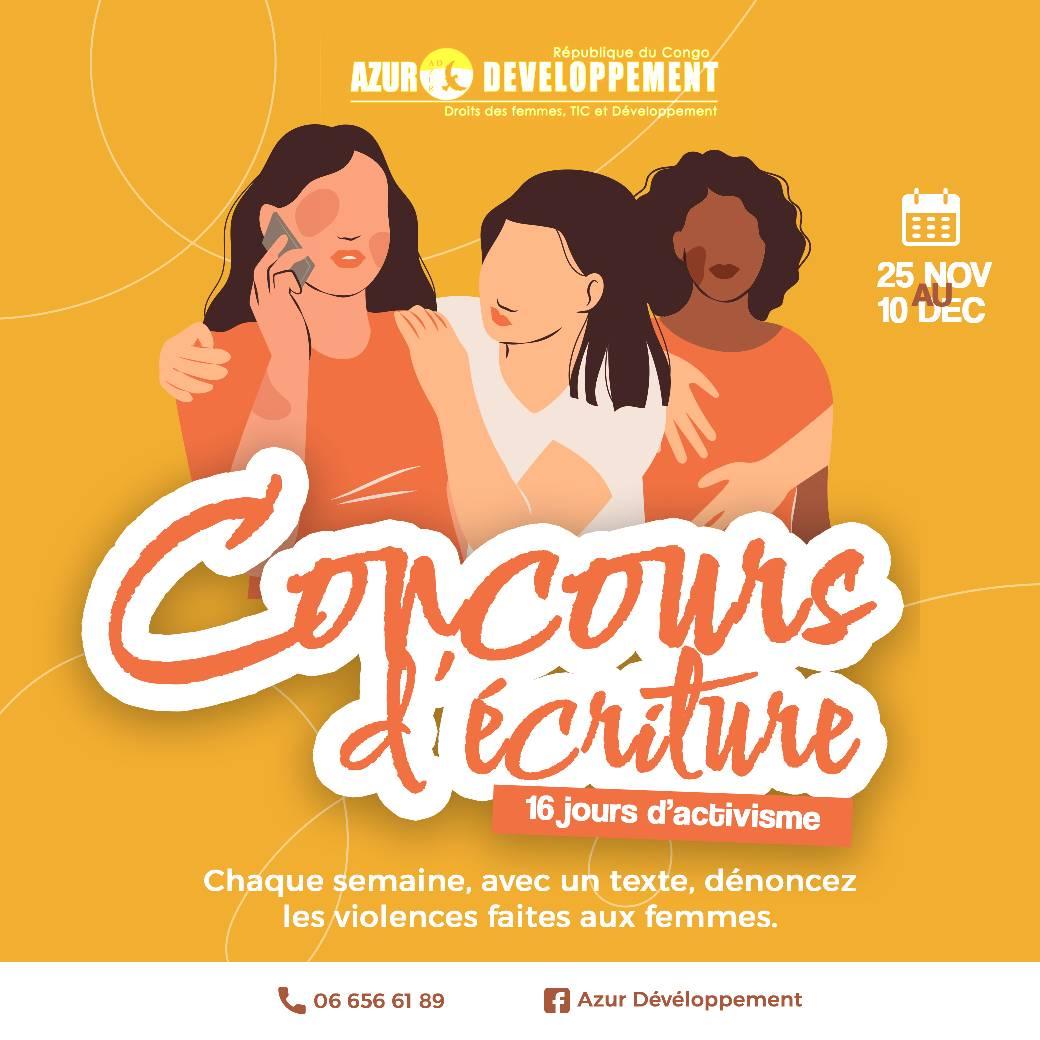 With support from APC and additional funding from the European Union, nine facilitators received training for the campaign and were able to offer support and information at what the organisation called “one stop shops” – spaces that provided assistance to women and girl survivors of violence – in the towns of Brazzaville, Pointe Noire, Nkayi and Loutéte.

In Brazzaville, campaign activities included “the posting of posters, the deployment of banners in the corners of the city denouncing acts of violence, and the implementation of 13 awareness sessions in schools, markets, neighborhoods and health centres.” 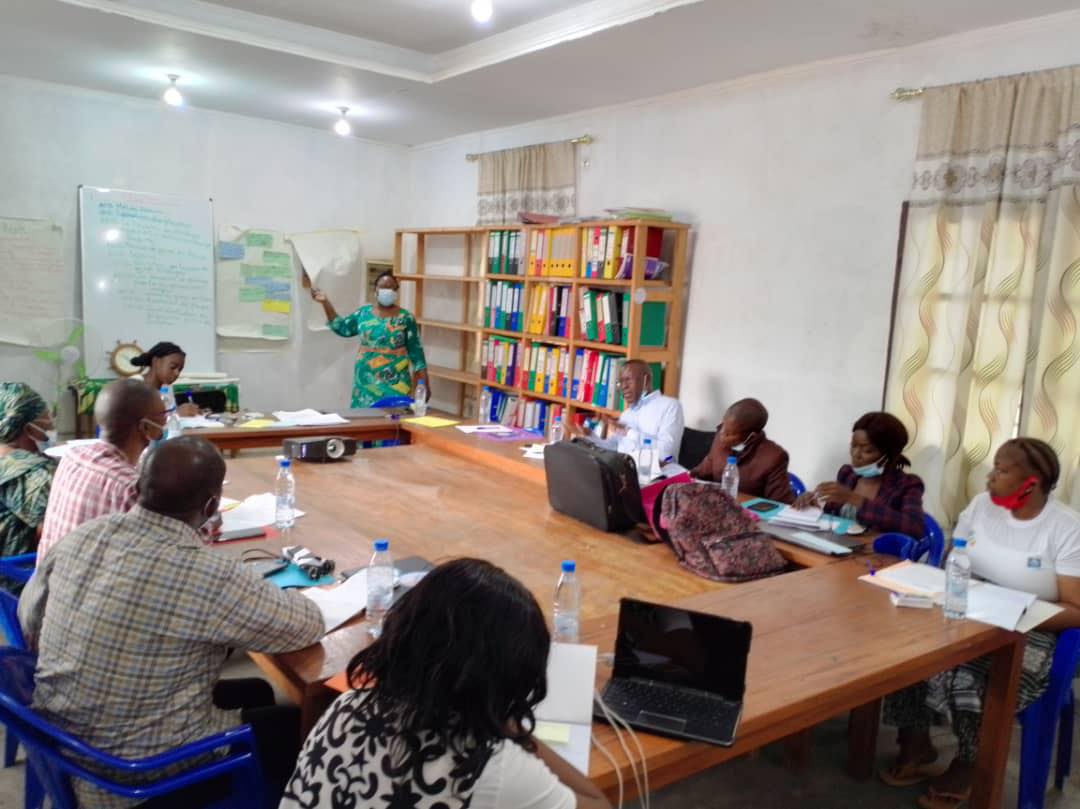 Meanwhile in Pointe Noire, “14 awareness sessions were organised in markets and health centres with women and girls to reinforce their knowledge of their rights and the rights of children, and of the services of the one-stop shop for assistance to women and girls who are victims of violence.” 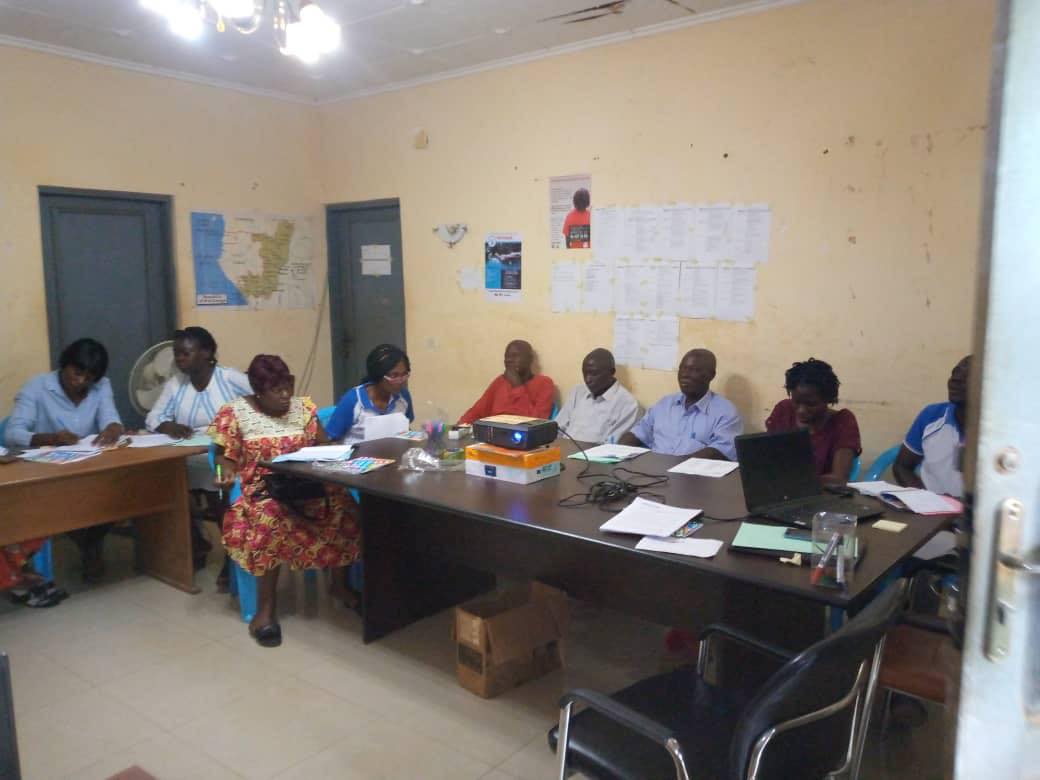 In Nkayi, AZUR Développement facilitators engaged in various awareness-raising sessions at four schools, three health centres and several markets, and also carried out some sensitisation activities in the town of Madingou for the first time. According to Charlène, the local project coordinator of AZUR Développement in this area, “about 80 women, 245 girls and 147 boys were sensitised during the sessions organised in the markets of the two localities.” The organisation was able to connect with 28 women and girls during this period, 11 of whom had suffered psychological violence. 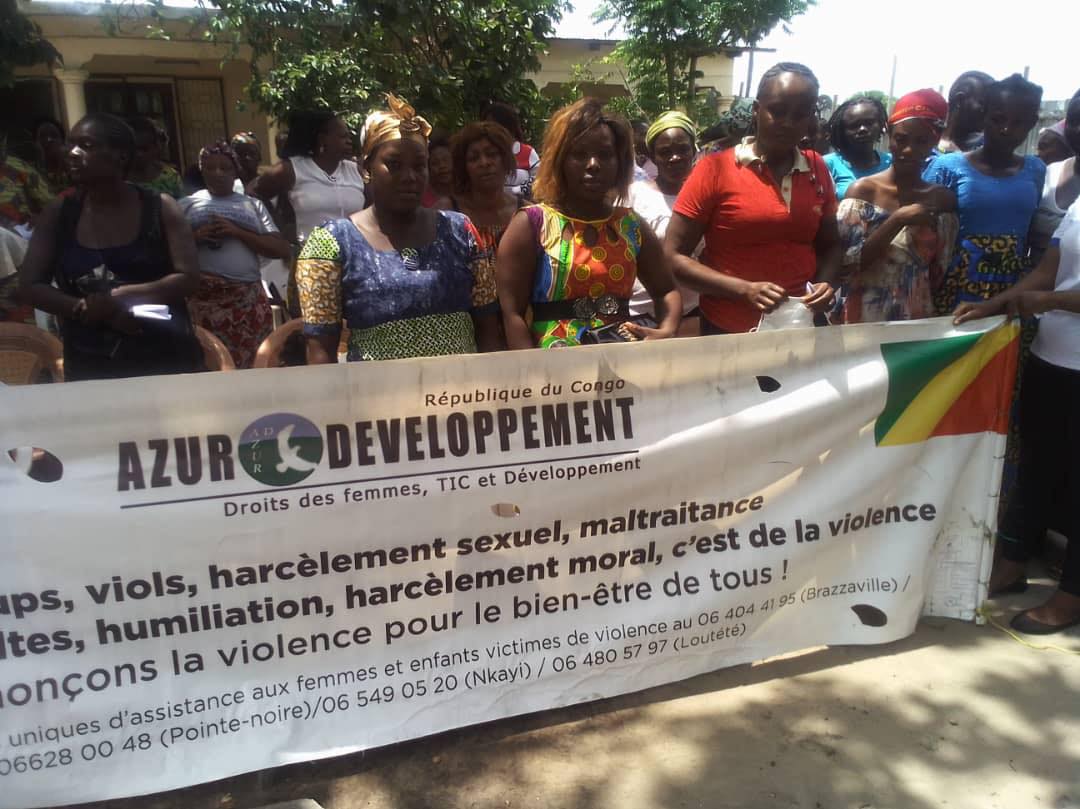 Finally in Loutéte, AZUR Développement was able to implement “several activities of sensitisation and information in public places, to enlighten the populations of this locality on the theme of gender-based violence.” 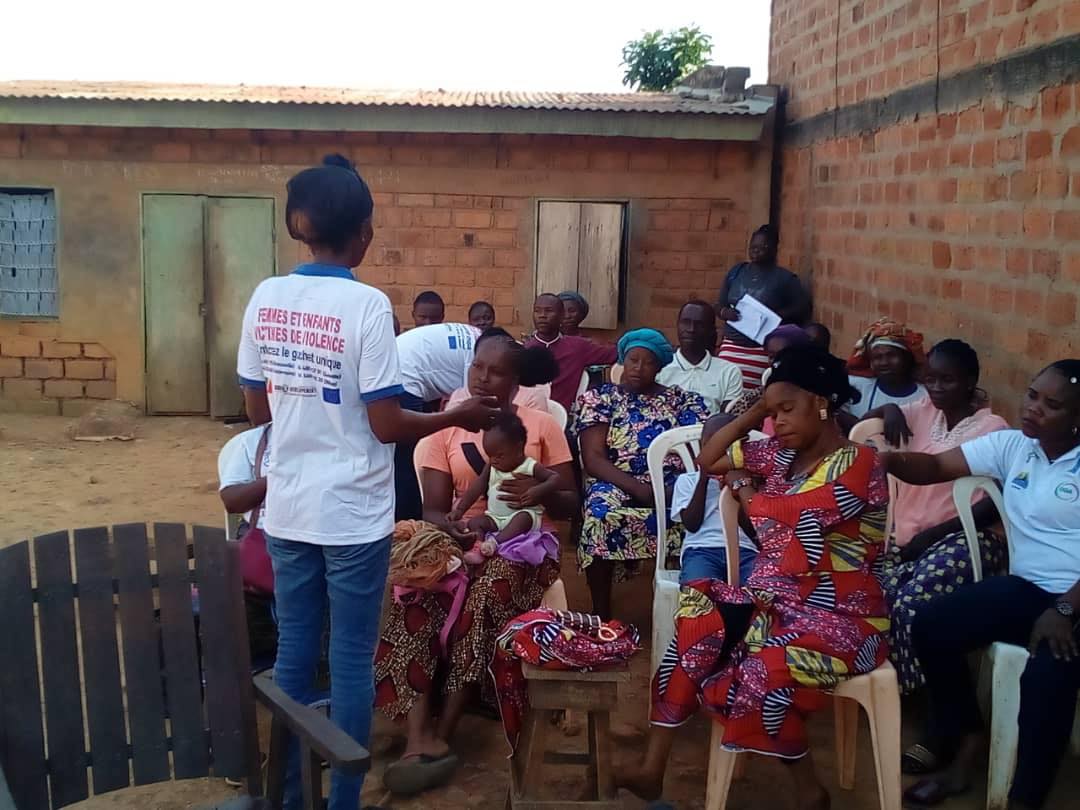 The breadth and scope of these activities carried out over the 16 days of activism against gender-based violence is impressive, and demonstrates how a small group of dedicated actors can make a big impact in their communities. Along with educating children and adults on recognising and responding to gender-based violence, “these sensitisation efforts allowed AZUR Développement, a structure which is fully invested in the prevention and elimination of violence against women, to raise awareness among some people who did not know that they were victims.”

Reclaiming control through solidarity and support

This campaign shows the powerful impact of placing a strong focus on sensitisation within communities. By educating people across all ages, communities gain greater empowerment. “Sensitised people have become aware of the forms and consequences of gender-based violence, can recognise it, reject it and denounce it,” Niombo reported.

Niombo furthermore explained, “Women and children are most often the victims of domestic and sexual violence, often by those closest to them. Cases of incest and marital violence are common.” The situation is exacerbated by the fact that the country has low internet access rates, meaning that it can be particularly difficult for victims of violence to find information and support online.

Given this context, the ample achievements of AZUR Développement’s Take Back the Tech! campaign are twofold. On the one hand, they have succeeded in raising awareness and understanding of gender-based violence across several communities with a view to preempting its prevalence. In parallel, the campaign has provided direct support to victims of gender-based violence: 68 women and girl survivors of sexual violence received help with filing complaints with police so that their perpetrators can be prosecuted, Niombo reported, thereby giving victims a means to reclaim control and hopefully take steps towards healing.

As APC launches Take Back the Tech! 2022, we find tremendous value in the groundbreaking work of members like AZUR Développement who seek to continue pushing back against tech-related violence through research, awareness, solidarity and collaborative solutions.

To join a local Take Back the Tech! campaign, visit https://takebackthetech.net/

This piece is a version of the information provided by AZUR Développement as part of the project “Take Back The Tech local awareness campaign”, adapted for the Seeding Change column. This column presents the experiences of APC members and partners who were recipients of funding through APC's core subgranting programme, supported by Sida, and of subgrants offered through other APC projects.