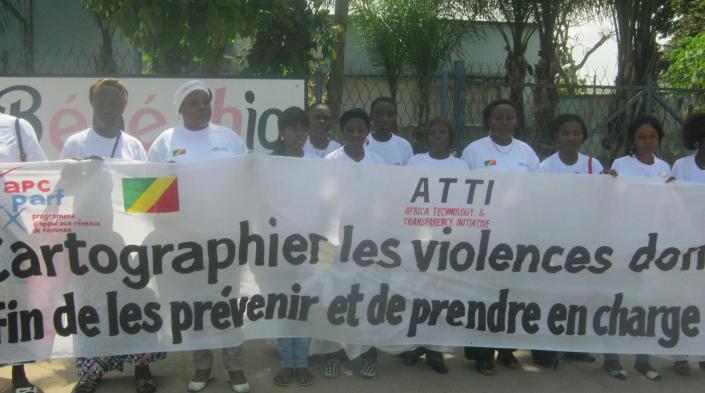 The Republic of Congo committed to eradicating gender-based violence by signing the United Nations Convention on the Elimination of All Forms of Discrimination Against Women (CEDAW) and the African Charter on Human and Peoples’ Rights (ACHPR).

How is the project implemented in the two areas of intervention? And by whom?

SN: The Africatti project is being implemented in two sites, Pointe-Noire, the economic capital of the country and Nkayi in the Department of Boueza which reflects the semiurban and rural environment. However, advocacy actions are also undertaken in Brazzaville, the capital. Three civil society organisations as well as two of AZUR’s departmental offices are implementing activities in Pointe-Noire and Nkayi. These are the Agence Régionale d’information sur le SIDA [Regional AIDS Information Agency] (ARIPS), the Réseau des Associations de Solidarité Positive du Congo [Network of Positive Charity Associations of Congo] (RASPC) and the Association des femmes pour le développement de la Bouenza [Bouenza Women’s Development Association] (AFDB) and the two departmental offices of AZUR Développement in these locations.

What is the involvement of government institutions?

How does this project fit within the scope of national priorities with regard to women’s rights?

SN: There is a national gender plan document that serves as a guide, which was compiled by the Ministry for the Promotion and Integration of Women. It recognises violence against women and girls, but does not identify specific indicators.

This makes our work difficult as each organisation defines its own strategic guidelines, targets and indicators and it is difficult to measure collective progress. There are efforts by civil society to work on this phenomenon but these actions are few and far between. The projects we have been running with APC since 2009 are therefore unique in that they bring together various women’s and civil society organisations, define precise objectives and are able to measure progress at the end of their projects.

What problems are faced by women and children who are victims of violence in these areas?

SN: Women and children are most often the victims of domestic and sexual violence, often by those closest to them. Cases of incest and marital violence are common. Organisations have observed that child victims of incest are often traumatised and unable to cope – some stop going to school.

From February to May 2013 in three districts of Pointe-Noire, for example, AZUR Développement, ARIPS and RASPC encountered 34 cases, including 13 cases of marital violence, which is 38%, and 12 cases of rape of minors, which is 35% of all monitored cases of violence. For instance, there was a case followed up by RASPC of a fourteen year old girl who was impregnated by her father. A ten year old boy is sometimes forced to steal to feed his small eight year old sister and two year old brother as his parents are separated and the father, with whom they live, refuses to accept any responsibility.

What successes have been achieved to date?

SN: We have been able to set up a case monitoring system in three Pointe-Noire districts, with each association taking responsibility for following up on reported cases with the district chiefs, police stations and healthcare centres and discussing what actions should be taken.

An internet follow-up platform has enabled us to map and track cases of domestic and sexual violence. The capacity of our partners has also been strengthened in this regard. More than ten of them also use the internet.

Survivors of violence receive psychological support provided by Azur Développement in therapy/support groups organised within the context of its regular activities.

In the absence of a specific law on violence, do your beneficiaries have access to justice?

SN: There are certain provisions related to violence within the Penal Code, Family Code and Child Protection Act. Rape is legally considered a crime. However, criminal trial sessions are held irregularly and the perpetrators of rape are often not punished. Legal proceedings are often slow and relatives of victims are confused about the police and court procedures.

Consequently, our work not only consists of collecting data, but also providing useful information for victims and their relatives on these procedures, helping them to file complaints and assisting them in finding information on their complaints at the police stations and courts. For example, a woman and her children abandoned by her husband was able to go to court to request alimony thanks to our intervention and that of the Director of Human Rights in Pointe-Noire. Medical expenses for treatment required by victims of physical violence and rape are not free or borne by the state, and this is an obstacle to families. We encountered cases of rape in Nkayi where the victims had received no treatment, stating that they had no money. However, such treatment is essential.

There have been many projects focused on violence against women and girls in Congo since the 1990s. What makes this project different?

SN: This project is different because we report to local authorities and create space for dialogue for issues related to domestic and sexual violence amongst women’s and human rights organisations. This enables us to find local solutions.

What also works is the possibility of tracking cases of violence online, obtaining details about the types of violence, seeing what actions have been taken or which cases have been closed without follow-up.

At community level, they then know where to go to look for help.

However, much awareness-raising work is still needed with regard to violence against women and children in the districts where the project is being implemented and even in other areas, as many women and children do not even know what violence is or how to deal with it.

How do problems of connectivity and computer access affect local partners that are not in a position to add to the platform?

SN: The computer resources belonging to the project’s local partner organisations, ARIPS, RASPC and AFDB are inadequate or non-existent. The bulk of the work of this project is to establish contacts in the districts, conduct advocacy activities with mayors and district chiefs, and provide psychological support as well as legal follow-up for victims of violence.

ICT resources are available at the offices of Azur Développement where data sheets are filled out and sent by email to the central office in Brazzaville for entry into their online platform database as they have a better internet connection. However, partners may visit the internet platform from internet cafés or through the use of internet modems offered by mobile telephone companies.

How do you plan to use cases documented on the platform to force government accountability for gender-based violence?

SN: It is a matter of documenting the extent of such violence and, based on evidence, forcing the concerned authorities to make decisions to ensure that violence against women and girls is one of the government’s action priorities.

By documenting cases of domestic and sexual violence in Pointe-Noire and Nkayi, our approach is to show the incidence of violence and identify the recurrent types of violence. We will present this data to different stakeholders, including government, civil society and local communities, to convince them to take action.

The cases documented on the internet platform are summarised in a periodical report that is discussed in a stakeholder meeting with local authorities, civil society and Town Hall representatives in order to clear up problems/difficulties and find solutions. The relevant government departments in the project areas are therefore involved and may offer solutions and take action. We observed this after the first meeting held in May in Pointe-Noire.

The platform also ensures data availability by location and indicates the number of files that have been closed or not followed up.

Broad-scale education of the media is planned with regard to use of this platform to write articles, compile press kits and other news stories so as to support the direct advocacy we are conducting with the authorities in an endeavour to not only prevent violence but also to ensure access to justice, healthcare and social rehabilitation for victims of violence.

The Réseau des Associations de Solidarité Positive (RASP) is an men’s organisation created in 2009 that is active in prevention and legal assistance for women and children who have been victims of violence. They follow up complaints to the police and work with photos as basic tools to raise awareness of the damaging effects of domestic and sexual violence. This organisation worked in the Take Back the Tech! campaign in 2010 within the context of the MDG3 project.

The Agence Régionale d’Information et Prévention du Sida (ARIPS) is a women’s association working in HIV/AIDS prevention, advocacy, strengthening of women’s groups in urban and rural areas, prevention of violence against women and girls and education of children. It worked in the Take Back The Tech campaign in 2010 and 2011 within the context of the MDG3 project. Its members are trained in blogging and maintain a blog on violence against women and girls URL: http://violsconjugauxcg.blogspot.com/

The Association des Femmes pour le Développement de la Bouenza (AFDB) is a women’s association created in 2011 that takes care of women living with HIV-AIDS and is involved with prevention, listening and guiding survivors of domestic and sexual violence towards the appropriate services. It organises community mobilisation on these issues in rural and urban areas. It worked with Azur Développement as a partner in an activity related to the psychosocial welfare of women funded by a European Union project in the Congo.

Check the mapping platform for documenting cases of domestic and sexual violence .