APC condemns the crackdown on peaceful protesters in India, including the harassment of APC staff member

Inicio / Publicaciones / APC condemns the crackdown on peaceful protesters in India, including the harassment of APC staff member 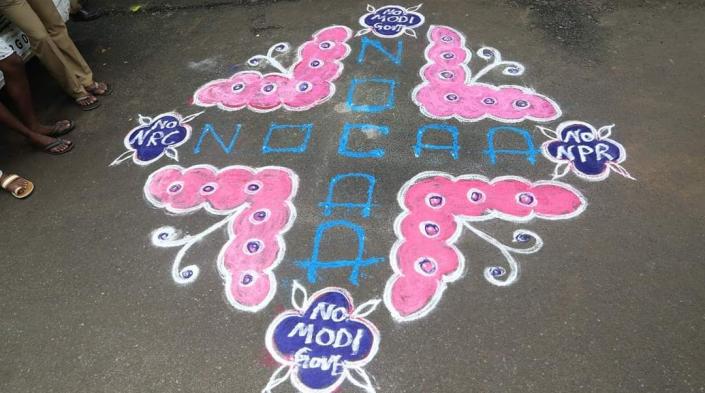 The Association for Progressive Communications (APC) condemns the crackdown on peaceful protesters in India, including the harassment of APC staff member Gayatri Khandhadai.

We urge the Indian government and all relevant authorities to:

APC demands that the Police Commissioner of Chennai guarantee the integrity and safety of Khandhadai and other protesters, and ensure their due process rights.

Background on CAA and protests

In recent weeks, peaceful protests have erupted throughout India in response to the adoption of the controversial Citizenship Amendment Act. Passed in early December, the amended legislation excludes Hindus, Sikhs, Buddhists, Jains, Parsis and Christians from Afghanistan, Bangladesh and Pakistan who have been resident in India since before 2014 from the status of "illegal immigrants", and expedites their path to citizenship. The Amendment does not extend the same protection to atheists and Muslims, including minority sects, from these three countries.

Critics say that the CAA undermines India's secular constitution, which ensures equality for all religions and does not list religion as a criterion for citizenship. The CAA, read in conjunction with the National Register of Citizens (NRC), has put India's 200 million Muslims on high alert. The NRC, which is set to be implemented nationwide, is an exercise in registering every single person in the country in a single database, with the onus of proving citizenship on individuals through often hard-to-find ancestry documents. Incendiary remarks made by India's Home Minister Amit Shah, linking the CAA and the NRC and calling Muslim migrants "infiltrators" and "termites", has further heightened fear of the impact of both the CAA and NRC on Muslims and other marginalised groups. This joins a growing list of controversies spurred by the Bharatiya Janata Party-led government, which is accused of pushing a Hindu-nationalist agenda and discriminating against religious minorities.

International groups and experts have also expressed their concerns in relation to this discriminatory legislation. The UN Office of the High Commissioner for Human Rights (OHCHR) has called the CAA "fundamentally discriminatory in nature". According to the OHCHR, the amended law would appear to undermine the commitment to equality before the law enshrined in India's constitution and India's obligations under the International Covenant on Civil and Political Rights (ICCPR) and the Convention for the Elimination of Racial Discrimination, to which India is a state party, which prohibit discrimination based on racial, ethnic or religious grounds.

Restrictions on the right to protest

There has been a severe clampdown on the right to protest across India. In addition to prolonged network shutdowns, dozens of people have been killed and thousands have been arrested amid demonstrations in India against the CAA. The UN Secretary-General expressed concern about the Indian government's use of excessive force and urged full respect for the rights of freedom of opinion and expression and peaceful assembly.

Though prior permission is not a requirement, in Chennai, restrictions on the right to protest have taken the form of denials of requests to protest, as required under Section 41(3)(a) of the Madras City Police Act, under which a person has to seek written permission from the police to hold any protest or rally. The police have been denying all applicants permission to protest, thereby forcing everyone to protest without permission and subsequently filing cases against them.

For instance, a group of young individuals and activists, including two APC staff members in Chennai, applied for permission for a protest on 22 December, but their request was denied. They went ahead with the protest and a case of unlawful assembly (Section 143 of the Indian Penal Code) and disobedience of an order duly promulgated by a public servant (Section 188 of the Indian Penal Code) was filed against 10 named activists and 200 unnamed persons.

On 29 December, a group of activists in Chennai, including APC staff member Gayatri Khandhadai, decided to protest by drawing kolams (patterns with rice flour) that said “No to CAA and NRC”. Kolams are part of a long-standing tradition in Tamil Nadu, drawn especially during the ongoing Tamil month of marghazi, which is a central part of their culture. They were met by over 40 police personnel who asked them to stop since they did not have permission under Section 41(3)(a) of the Madras City Police Act. The activists did not seek permission for this because it was not an organised protest and they were not raising slogans.

Khandhadai had spoken to police the previous day and informed them of the group's plan. There were no more than three people outside a house at any time while the kolams were being drawn. Despite this, five of the activists, including Khandhadai, were forcibly put on a bus and taken to a community hall near the J5 Besant Nagar police station, where they were detained. Three other lawyers, including another APC staff member, went to the area where the activists were being held in order to provide legal assistance and were themselves detained for “aiding the protests”, although no law was cited by the police despite being asked. The police released the eight individuals after a couple of hours, after taking down all their personal details. The activists later learned that they were being charged under Sections 143, 188 and 341 (wrongful restraint) of the Indian Penal Code.

Police actions detaining people for something as benign and peaceful as drawing kolams were met with widespread condemnation, especially as it holds great cultural significance in Tamil Nadu at this time of the year, when there is a tradition of waking up at sunrise to draw kolams. The story went viral in Tamil Nadu and nationally, with many people drawing kolams outside their houses in solidarity.

On 1 January, during a press conference to discuss the 2019 crime statistics, the Police Commissioner of Chennai, A.K. Vishwanathan, responded to a question about the kolam protest by saying that one of the protestors, Gayatri Khandhadai, had a “Pakistan connection” since her Facebook page listed her as having collaborated with Bytes for All, Pakistan, a human rights organisation. He showed printed copies of her Facebook profile page along with another printed copy of Bytes for All’s association with the Association of All Pakistan Citizen Journalists. Vishwanathan said her "link to Pakistan" would be investigated.

Vishwanathan also showed what appeared to be a misleading video of a resident having an altercation with someone off camera about a kolam outside his house, saying that the activists were drawing the kolams without consent and disrupting the peace. He further stated that this was the reason the police had arrived at the protest. None of the activists involved in the kolam protest recognise the resident involved, and say the incident never happened. It was later verified by media that no problem arose between the protesters and the residents of the area and that the police arrived before this resident expressed his consent to file a complaint against the protesters if required.

It is worth noting that Vishwanathan was instrumental in unleashing police violence against lawyers on 19 February 2009. Gayatri Khandhadai was a part of the team of lawyers that assisted in the case before the Madras High Court wherein lawyers alleged that police violence was carried out under his supervision. The case ultimately resulted in the Madras High Court passing an order dated 18 March 2009 directing that he be suspended.  The order is currently under review of the Supreme Court  of India, which has provided an interim stay on his suspension.

In his press conference on 1 January, Vishwanathan essentially doxxed Khandhadai. Her role in the protests is now being discussed widely on social media including insinuations about her links with Pakistan and her work at APC.  We believe the Police Commissioner is intentionally spreading rumors about Khandhadai, including by playing into Islamophoic sentiments in order to intimidate and silence her and others who are exercising their constitutionally protected right to peacefully express their dissent. We fear that there is a real possibility that she could be taken into police custody.

Khandhadai's work and role of APC