Watching Cameroon through the lenses of the African Declaration on Internet Rights and Freedoms: Policy brief

Home / Publications / Watching Cameroon through the lenses of the African Declaration on Internet Rights and Freedoms: Policy brief 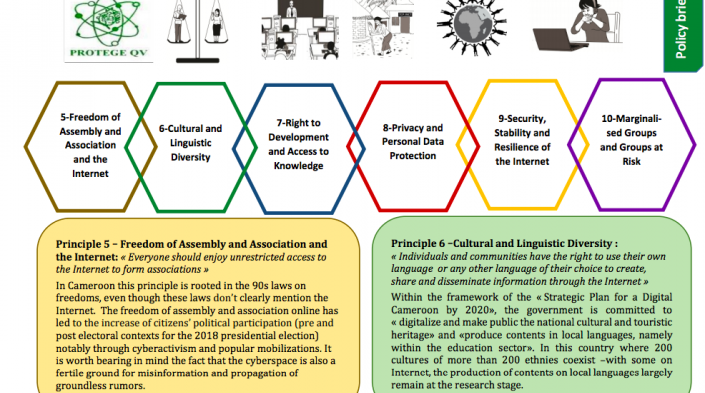 Access to the internet is growing in African countries, representing an efficient development tool, but also posing serious threats to human rights. In a bid to mitigate the risks, the African Declaration on Internet Rights and Freedoms with its 13 key principles was adopted by the African Commission on Human and People’s rights in Banjul (Gambia), on 4 November 2016. In Cameroon, despite the numerous programmes put in place by the government with the support of information and communications technologies (ICTs), the government itself has voluntarily suspended internet services partially or totally during crisis situations.

This policy brief, which visually illustrates relevant issues related to internet rights in Cameroon, was developed by APC member PROTEGE QV based on their in-depth study Watching Cameroon through the lenses of the African Declaration on Internet Rights and Freedoms. The study was produced through an APC research and campaign subgrant and made possible with the support of the Swedish International Development Cooperation Agency (Sida).

PROTEGE QV, which stands for "Promotion of Technologies that Guarantee Environment and Quality of Life" in French, is a Cameroonian non-governmental organisation created in 1995. It aims to promote rural development, protect the environment and improve the well-being of communities. PROTEGE QV believes in the power of ICT to provide equal access to information as a strategy to fight against poverty. It is a member of the APC network.