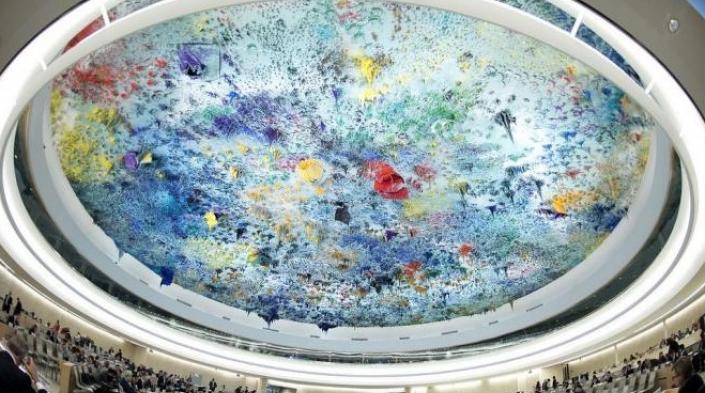 The Human Rights Council (HRC) has started its 45th session in Geneva. The session will be taking place from 14 September to 2 October 2020. APC considers the Council sessions an important opportunity to discuss country situations of concern, to review how states are complying with their human rights situations and to influence the setting up of international standards in the area of human rights online.

The HRC meets three times each year. Thematic resolutions and Special Procedures reports are organised according to a yearly calendar. September sessions tend not to be particularly strong on digital issues, but here are some highlights:

No formal events will be allowed due to COVID-19. NGOs may participate in person in Geneva or via video statements during interactive dialogues and panels, but this has to be confirmed by the Council in the opening session on 14 September.

APC will seek to engage in the discussions around the resolution on safety of journalists, which has a number of provisions on digital issues and violence against women journalists. APC will also participate in the gender perspective panel.

See at the end the full list of country situations, resolutions and reports that will be reviewed, along with some relevant links.

The UN High Commissioner for Human Rights as well as several Special Procedure mandate holders have repeatedly raised concerns about the serious situation of arbitrary detentions in Egypt, in particular the use of pre-trial detention as a form of punishment against human rights defenders, bloggers and journalists, among others. APC has highlighted this concern, together with partner organisations, during the 44th session of the HRC. The families and lawyers of detainees have reported ill treatment in detention centres and difficulties to communicate with those who are being held. This situation has been particularly aggravated with the spread of COVID-19, imposing further risks on their health and wellbeing.

Last August APC launched, in partnership with ARTICLE 19, Access Now and the Electronic Frontier Foundation, the #IWantALetter campaign to take action demanding that Egyptian authorities provide transparent, accurate and regular updates on the measures being taken to curb and respond to the spread of COVID-19 in prisons.

According to this new report by the Independent Expert on the enjoyment of all human rights by older persons, there is a serious gap in the data available to capture the lived realities of older persons, including in terms of enjoyment of human rights. This lack of significant data and information on older persons is, in itself, an alarming sign of exclusion and renders meaningful policymaking and normative action practically impossible. Overcoming these impediments to the realisation of the rights of older persons requires a fundamental conceptual shift in method and process that takes into account the entanglement of digital and analogue realities, or the so-called digitality.

Data is significant for the realisation of human rights. It is necessary in order to provide evidence of the extent of the challenges faced by older persons and of the policy and legislative needs. Data collection is crucial to create visibility and build an evidence base about human rights impediments for older persons and potential responses, to dispel stereotypes that feed ageism, stigma and discrimination, and to aid policymakers and advocates in the formulation of measures regarding antidiscrimination action, socioeconomic inclusion, and access to health and care. There is a need to set standards and reporting requirements for data gathering, in order to improve the existing data ecosystem and as an important impetus for statistical offices to gather more data on older persons.

A new resolution on the safety of journalists will be proposed by Austria, Brazil, France, Greece, Morocco, Qatar and Tunisia this upcoming session. In the past, these resolutions have raised important issues concerning the responsibilities of states, which have included the protection of communications against surveillance and interception, the importance of encryption and anonymity, and the online harassment of women journalists, among others.

The new resolution should include new wording referring to the impact of COVID-19 and restrictions imposed by states in this context. APC believes it would be important to see new language included in the resolution condemning network disruptions, including internet shutdowns, given the enormous impact they have - among others - on the flow of information, limiting journalists’ access to sources and impeding them from informing the public about the health crisis.

As planned, the panel discussion will focus on the importance of a closer examination of gender-based discrimination with respect to other dimensions of the human condition, such as race, ethnicity, nationality, location, religion, socio-economic status, indigenous/minority/migration status, profession, disability and/or age. It will provide a platform to exchange good practices and to discuss how to strengthen existing measures and overcome challenges to identify and address intersectional discrimination in the work of the Human Rights Council and genuinely promote substantive gender equality for everyone.

The panel is scheduled for 28 September (check the link to the Programme of Work below).

APC, together with partner organisations, issued a Joint Statement at the end of the HRC 44th session in which it recognised the HRC, United Nations Office at Geneva (UNOG) and the Office of the High Commissioner for Human Rights’ efforts to organise activities in the midst of the COVID-19 pandemic, but raised concerns with delays in finalising the session dates and modalities, and subsequent changes in the programme of work, reduced the time civil society organisations (CSOs) had to prepare and engage meaningfully. This had a disproportionate impact on CSOs not based in Geneva, those based in different time zones and those with less capacity to monitor the live proceedings. Other barriers to civil society participation that session included difficulties to meet the strict technical requirements for uploading video statements, to access resolution drafts and to follow informal negotiations remotely, especially from other time zones, as well as a decrease in the overall number of speaking slots available for NGO statements due to the cancellation of general debates as an “efficiency measure”.

APC contributed to efforts by the HRCNet to collect views from CSOs and present such concerns to the Council's President, UNOG and the Secretariat of the Council (OHCHR). A Summary of Recommendations and the survey results can be found here and here. APC calls on these actors to address these recommendations throughout this and upcoming HRC sessions.