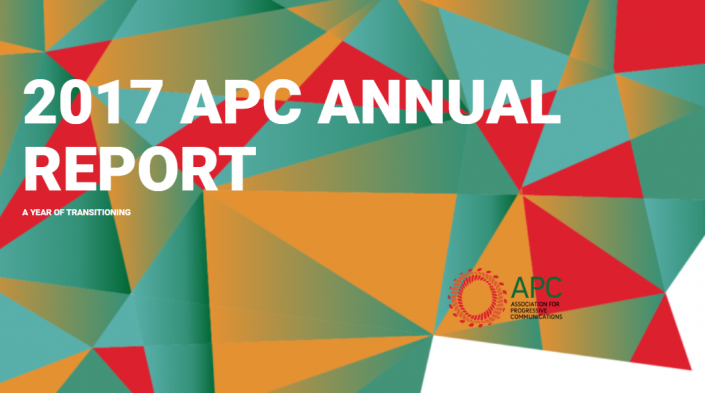 2017 was a year of transition in APC. When APC’s former executive director Anriette Esterhuysen told APC’s management team that she was resigning, we couldn’t quite believe it. Over the last 16 years, Anriette had been the heart of APC, and it was difficult to imagine APC without her.

Anriette first joined APC when the Southern African NGO Network (SANGONeT) – where she was executive director – became an APC member organisation in 1993. She was elected to APC’s board of directors as a representative of SANGONeT in 1997.

When Anriette was first appointed as APC’s executive director in 2000, there were five staff members. By 2017, we had 37 staff members living in 17 countries. In 2000, APC had 22 members organisations; in 2017, we had 58 organisational members active in 61 countries. On behalf of the APC staff, I’d like to thank Anriette for her leadership in shaping APC into the respected and influential global organisation and network that it is today.

Since I took over as executive director of APC, I have often been asked how I am finding this new position. Leadership change in any organisation creates uncertainty, so I focused my attention on two things that I felt provided continuity at a time of uncertainty and transition: the APC network and APC staff.

In August, we brought together all our organisational members and staff to talk about the network’s strategic direction, celebrate our collective work, and elect APC’s board of directors. Global meetings of APC members happen only every three years. During these meetings, APC members decide on the direction APC takes and the priorities we commit to as a network.

Our meeting in August 2017 was the 13th member meeting since APC was formed in 1990. We chose the elephant – revered for its strength, wisdom, longevity and cooperative spirit, values that embody the close-knit APC community – as the key element in the design of all the materials used for the meeting. This spirit was evident throughout the meeting, but two moments stood out me.

The first moment was hearing stories about the work of each APC member. We heard many inspiring stories and one story stuck with me. Arun of SPACE Kerala showed us emails from a severely autistic girl asking him questions about how the internet works. SPACE Kerala promotes open source software and undertakes digital literacy for poor communities in the state of Kerala in India.

The emails he showed us were written by the girl’s mother, who learned how to use email through SPACE Kerala’s work. Her daughter only communicates with her through touch – pressing into her mother’s skin to tell her something. The mother then translates this touch language into emails to Arun and vice versa. It was a powerful reminder of how access can make a profound difference in someone’s life.

The second moment happened on the last day of the meeting when APC members elected a new board of directors for a three-year term. The board of directors is APC’s primary governing body. It makes policy and management decisions, and works with the executive director and staff to implement APC’s strategic priorities. There were only seven positions open and 19 candidates from member organisations stood for the elections, ready to serve on the network’s board. To me, this was an indication of commitment and ownership on the part of our members. Not only does APC have a strong and competent new board, there are also 12 other member representatives who can step up when needed.

In 2017, the APC staff and management team also spent time together to work more on our internal organisational health. We started this process two years ago, and the leadership transition in APC created an opportunity and a sense of urgency to address our own challenges. We tackled work culture, workload, structures and processes, support and self-care, and agency and decision making. Our conversations were not easy, but we came out of them with a shared responsibility for sustaining an organisation with the energy and power needed to feel fulfilled and healthy in our work and to get us closer to the impact we want to make.

I am very proud of the contributions that the combined work of the APC staff and our members and partners have made this year in our priority areas: affordable and sustainable access, promotion of internet-related rights, creating a feminist internet, transparent and democratic internet governance, and building capacity among civil society organisations and human rights defenders in internet use and development. I invite you to read the stories in this report that make our work come to life.

APC’s year of transition has been a year of learning and change for all of us. We’ve had a good year, made possible by the spirit, hard work and commitment of the APC staff, the engagement of our members, the guidance of our board of directors, and the support of our partners.

I look forward to what next year brings.