Speaking of Hatred: Reflections on responses to hatred, hate speech and violence 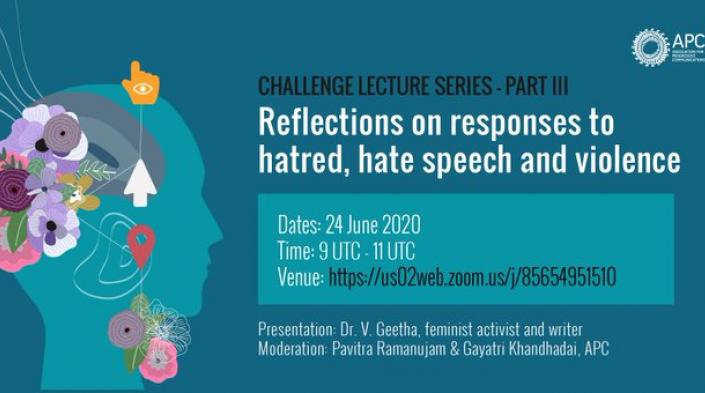 In the third and final session of “Speaking of Hatred: A three-part presentation on hatred, religion and gender in South and Southeast Asia", Dr. V. Geetha talked about responses to hatred, hate speech and violence.

In the last two lectures, Dr. Geetha had spoken on the conscious effort by many nation states in South and Southeast Asia to build their national identities deliberately on the basis of exclusion and further develop an architecture of hatred against those who found themselves excluded from the protection afforded by this identity.

In the final presentation of this lecture series, Dr. Geetha spoke about civil society resistance at various levels and through various approaches to this architecture of hatred constructed by states. To understand where and how we can build this resistance, it is important to understand that states spend considerable amounts of time and effort constructing this architecture: they embark on nation building by, among other things, drawing on real and imagined histories, on civil society tensions, and on economic tipping points.

As citizens, we encounter and have an opportunity to engage with this nation building first at the time of elections. Although electoral politics have not always been easy or even possible in South and Southeast Asia, Dr. Geetha spoke of the importance of still having faith in democratic representation and the insistence on constitutional values as a system of accountability. As she explained, in the context of history, electoral democracy is still relatively new and young, so we must continue to work to refine it rather than think about replacing it entirely. While it might not always result in systemic change, elections and other forms of public participation such as protests have allowed people to express their dissent and anger, and challenge or at least provisionally vote out governments that have thrived on hatred.

States also strengthen their oppressive structure through many legal and quasi-legal methods, including the promulgation and implementation of laws and policies that exclude certain sections of people, especially religious or ethnic minorities, and that justify extreme forms of control, regulation and abridging of human rights, which happens on an everyday basis and from the very lowest levels of the administration. In the context of resistance to these systems, Dr. Geetha spoke of civil rights movements and groups that emerged in South and Southeast Asia in various forms, like the University Teachers Association in Sri Lanka during the civil war. Another example is the activism around the Hudood ordinances in Pakistan by Asma Jahangir and her colleagues, who have kept up sustained movements in favour of constitutional rights, fought for accountability through every avenue available in our justice systems and challenged the state’s right to act with impunity. It is especially critical that we remember them and their impact now, in light of the growing authoritarianism in our region, which makes civil rights work seem futile at times.

Dr. Geetha also pointed out that it is important for us to remember this as we navigate through the era of social media, where we are forced to spend much of our time fact-checking rather than countering the actual nature of the problem. In explaining this, she pointed to the example of Kashmir, which has been struggling to free itself from India, and against the tide of the narrative from the Indian state that asking for freedom is unpatriotic and anti-national. In this context, the archive built by civil rights groups of the history of Indian occupation is a critical resource for those looking to counter this narrative. It would then be helpful to remember how these acts of hatred and resistance to such acts have occurred in the past, as it will be to multiply our forms of resistance rather than polarise, and build broad alliances of voices and positions against specific acts of hatred and violence.

Dr. Geetha also spoke of the work done by women’s groups, especially the nature of their peace work, which has allowed them to build a culture of reflective thinking around the effects of violence and the connectedness of all peoples. She highlighted women’s sincere attempts to bridge differences between different sides even in times of war, whether it was women’s groups during the civil war in Ireland, the nuns of Cambodia, women’s groups in the aftermath of the riots in Gujarat, India, or the work done by groups such as Women Living Under Muslim Law, who have especially engaged on how religion, state violence and hate often meet. While this is a minority history, the quiet care work done by feminist groups, such as supporting survivors in court or engaging in relief and rehabilitation work during times of violence, has been essential. Their approach can be particularly effective in fighting hatred as these groups reach across political and religious lines, and build common solidarity and a sense of social affection.

Finally, Dr. Geetha also addressed resistance to governance structures that are entrenched in the ideologies of hate. She pointed out the importance of fighting the everyday injustice meted out by these systems to minorities and marginalised groups, of carrying out the granular, systemic work needed to ensure that hatred doesn’t become routine, rather than only challenging the authority of the government when there is a state of exception in the form of a grave violation of rights. Social media is especially helpful in this work, to highlight the everyday violations that take place.

Dr. Geetha ended her presentation by stressing that we must learn to tell the stories of our nation states differently, to include the truths of the conflicts inherent in our claims of inclusion and secularism, to sometimes change the nature of the debate, so minorities are not just viewed uni-dimensionally, to build cultures that are not confined to identities but seek to focus on our interconnectedness and above all, attempt to find ways to co-exist.

Listen to Part III of the three-part series here:

Read about and listen to Part II of the series, which explored the role of states in South and Southeast Asia in organising and building systems of hate directed against various minorities, here.