Speaking of Hatred: Adoption of hate as a political tool by states

Home / News / Speaking of Hatred: Adoption of hate as a political tool by states 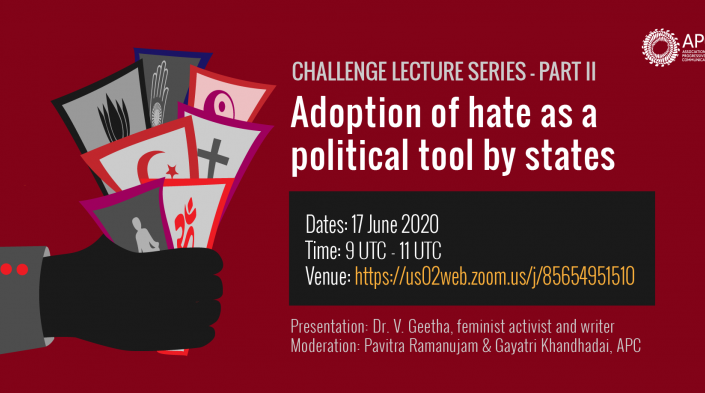 In this session, Dr. Geetha explained that when colonisers left different parts of South and Southeast Asia and nation states began to emerge, they were suddenly confronted with varying levels of inequalities based on gender, class, caste, ethnicity and religion, which had been temporarily set aside during the struggle for freedom. In the face of this challenge, nation states reacted by violently affirming their national identities – that is, the state’s version of “national identity” – in and through a logic of exclusion, especially on the basis of religion.

These identities asserted by post-colonial governments in the region became the basis for future political assertions, she noted. The nature of establishing these identities was not questioned, and led to the emergence of systems and forms of governance that allowed states to normalise targeting minorities, especially religious minorities.

In exploring how this happened, Dr. Geetha spoke of Sri Lanka, where the “Sinhala only” policy, introduced as a way to bolster “unity”, meant that the Tamil population was excluded from citizenship; Malaysia, where the British system of governing on the basis of ethnic identities, which emerged to suppress the Malaysian Communist Party, was continued post-colonisation without question; Pakistan, where the division of Pakistan and Bangladesh was a result of a certain natural cultural understanding of what it meant to be Muslim; and Indonesia, where communists were considered as anti-Islam and having no moral values, and therefore not Indonesian. All differences and inequalities confronting the state were looked at through the lens of national identity, making it easy to cast minorities and those challenging the state as the “other” or anti-national.

But how do states convince their populace to go along with their logic of exclusion and accept it as part of the national identity? States primarily achieve this by constructing an architecture of hatred – a blueprint that can be used by any of its citizens to carry out acts of hate and violence against their peers. Dr. Geetha spoke of the situation in India, which she said could be an object lesson to extrapolate to other countries in the region.

In India, for many years now, Muslims have been cast as the “other” of what it means to be Indian. This has been done by drawing attention to specific tenets of Islam, by inventing a “Muslim” persona that is projected on all Muslims and building stereotypes that are propped up by a negative theology. These are fomented through endless whisper campaigns, orchestrated by state-like actors such as paramilitary groups, ruling party ideologues and, most recently, social media trolls, to the point where the idea of Muslims as the “other” has been constructed in the Indian consciousness.

Once this template was set up, the legal and administrative systems have allowed it be executed with ease. Resistance is met with violence, and the criminal justice system is co-opted to ensure that religious minorities are pushed out of the system. The structures are set up in a way that routinely dehumanises the minorities and poor, and makes it appear that they are less worthy of justice than others. Most importantly, those who carry out these acts of hate and dehumanisation are allowed to do so with full impunity.

As Dr. Geetha concluded, when we speak about responses to hatred, we must be especially aware of successfully established systems that breed hatred and criminalise dissent and resistance, so that we may begin first by dismantling them.

Part III of the series, which focused on responses to hatred and violence in our communities, is now available here.