Speaking of Hatred: Deconstructing the gendered nature of religion-based hate and violence 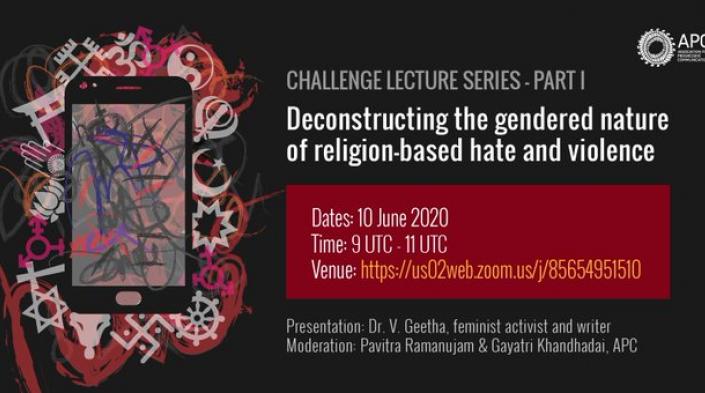 In the first of the three presentations, on 10 June, Dr. Geetha spoke about the nature of hate – an emotion that seems ubiquitous in our current world – and explored a number of questions: How we can make sense of the hatred around us? Where does it come from? What are its consequences? And how should we respond to it?

The rise in hate speech has been a disturbing trend in recent years, fuelled by an increase in internet connectivity and access to social media. However, as Dr. Geetha points out, this hate speech, though widespread, is not new – it is in fact an extension of organised hate that in many cases has long and complex histories.

Hatred and hate speech are related, but are not quite the same thing. While hate speech is an expression of beliefs, ideas, opinions and norms, this speech is made possible by certain social and political structures, and the people who occupy power in these structures and who are granted credibility, who are able to articulate hate in ways that grant it currency and normalise it, Dr. Geetha explained. They are able to place the object of their hatred beyond the pale of humanity, making their “othering” or exclusion morally conscionable. This is done slowly and systematically, through legal and administrative means, by drawing on real or imagined histories.

In South and Southeast Asia, hatred is often linked to religion and in many cases to the emergence of nation states in the region and the construction of their national identities. Across the region, nations have either sought to affirm their identities in a manner that has implied the exclusion of certain people or groups, or they have sought to define the “other” and build their national identity in contrast to that. Dr. Geetha’s presentation examined both these ideas closely through the histories of Indonesia and India, among other countries in the region.

The presentation also made a case for the gendered nature of all religion-based hatred and violence, where systems of hatred are built through a structured, statistical, ideological process, but held together on the basis of a gendered logic that renders it easy to internalise and carry out, both by men and women in different ways.

So while social media and the internet have allowed hate to become ready reusable in shorthand, it is important that we remember the long histories that stand behind it in order to develop an effective response to it, she stressed.

Listen to Part I of the three-part series here:

Parts II and III of this series, which will take place on 17 and 24 June, respectively, will examine the role of states in adopting hate as a political tool and our responses to hatred and violence in our communities.

Part II and III of the series are now available for listening here and here.