New index on racism against Palestinians on social media 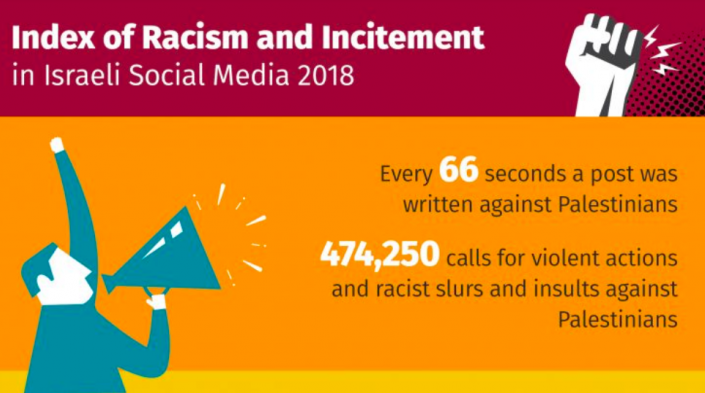 Every 66 seconds a post inciting hatred against Palestinians was shared on social media platforms in 2018. Almost half a million calls for violent actions and racist slurs were registered. From all the posts mentioning the term “Arabs”, 1 out of 10 contain an insult or an invitation to violence against Palestinians. These are some of the revelations included in the Index of Racism and Incitement in Israeli Social Media 2018, launched by APC member 7amleh-The Arab Center for Social Media Advancement, which received an APC project grant in 2018.

The index shows shows a huge rise in incitement and racism against Palestinians on social networks between 2017 and 2018, with the most hate being directed at Palestinian members of the Israeli legislative body, Knesset, and their political parties in Israel during the discussions and passing of the Nation-State Law, which guarantees rights to Jewish citizens only.  There was also an increase in incitement against influential Palestinian citizens of Israel on Israeli media, such as renowned media figure Lucy Harish.

According to the data gathered among a list of social media platforms, Facebook stands out as "the main platform for violence", especially for racist groups, figures and outlets. According to 7amleh's co-founder, Nadim Nashif, this is related to Facebook's double standards in its policing of content of Israeli and Palestinian users, allowing hate speech from Israel to spread. Nashif stressed the responsibility of both the Israeli government and Facebook, and the need to advocate for the platform "to review their policies and to prevent incitement, hatred and racism online."

“This kind of violence starts with incitement on social media. It starts with leading politicians and trickles down into institutions, such as the police as well as to people on the street,” he said. “These decision-makers incite against the Palestinian minority in Israel, and then the police and right-wing activists put their words into action.

The index is the result of research conducted by 7amleh by monitoring violent and racist language online. It is based on a list of 100 keywords of words, names and expressions in Hebrew to measure the level of violent rhetoric and hate speech by social media users.

7amleh-The Arab Center for Social Media Advancement is a non-profit organisation aimed at enabling Palestinian and Arab civil society to effectively use the tools of digital advocacy through professional capacity building, defending digital rights and building influential digital media campaigns. Since 2017, they are a member of the APC network.