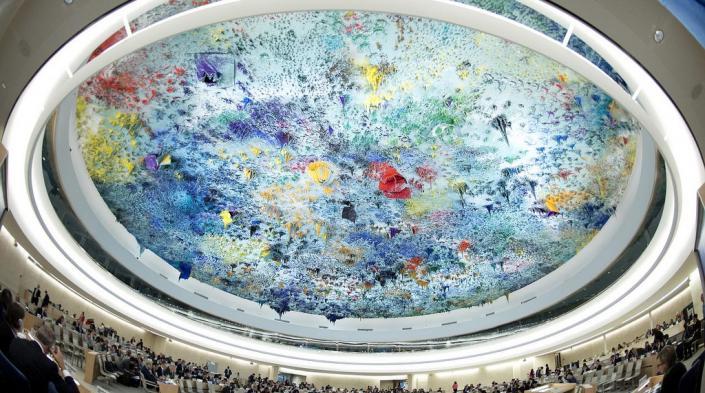 The 40th session of the Human Rights Council (HRC) opened Monday with an address by the UN Secretary-General António Guterres in which he highlighted some of the key challenges for human rights today, including threats in digital environment. The Secretary-General expressed his deep alarm over the shrinking civic space in every region of the globe – and every corner of the internet, the targeting of activists and journalists, by surveillance, misinformation campaigns and threats of violence that too often result in actual violence, and the misuse of big data and facial-recognition technology for undue surveillance and interference with free speech, causing a chilling effect and a shrinking space for dialogue. In his words, “The immediacy and reach of online threats pose serious challenges to those who wish to speak up.”

Over the next four weeks (25 February to 22 March) the Council will meet, starting off with a series of high-level statements from governments, followed by interactive dialogues with UN Special Procedures on a range of human rights issues and country situations and panel discussions on pressing issues like rising nationalist populism and extreme supremacist ideologies and the rights of persons with disabilities, and will conclude with the adoption of resolutions in the final week. We implore members of the HRC to respond to the urgency expressed by the Secretary-General and stand up against threats and challenges to human rights posed by the misuse of new technologies. APC’s priorities for the session include strengthening gender-responsive policies that promote and protect the right to privacy of all people in the digital age, defending expression and diversity of religion and belief or non-belief online and offline, and raising awareness about the "digital occupation" being experienced by Palestinians.

The Twitter hashtag for the session is #HRC40, and plenary sessions will be live streamed and archived at this link.

Side events relevant for internet rights

Reports from this session relevant for human rights online

The Special Rapporteur on the right to privacy will present his annual report on intelligence oversight mechanisms. The bi-annual resolution on the right to privacy in the digital age, which would have typically been run at the March session, will instead be considered at the June or September session. This delay will allow for some space to reflect and build on the recently adopted UN General Assembly (UNGA) resolution on the topic.

Among the substantive additions to the December UNGA resolution on the right to privacy in the digital age was important new text on gender, which recognised that promoting and respecting privacy are important for the prevention of online gender-based violence, abuse and sexual harassment, and called on states “to consider developing, reviewing, implementing and strengthening gender-responsive policies that promote and protect the right of all individuals to privacy in the digital age.”

The collection, processing and exploitation of data, by both state and non-state actors, are not gender-neutral acts. Likewise, the enjoyment of the right to privacy is very much shaped by one’s gender, sexual orientation and gender identity. In the digital age, we see offline misogyny, heteropatriarchy and gendered injustices not only replicated, but also exacerbated and taking on new forms. APC will be raising the gendered dimensions of the right to privacy, including the privacy violations that women and LGBTIQ persons face, the obligation of states to protect against such violations, as well the responsibility of the private sector, at HRC40. Together with Privacy International and privacy core group (Austria, Brazil, Germany, Liechtenstein and Mexico), APC is organising a side event on Monday, 4 March on “Gender and privacy in the digital age” (more details above).

Freedom of religion and belief in online spaces

The Special Rapporteur on freedom of religion or belief will present his annual report on blasphemy and religious insult with a focus on online spaces, as well as his report on a country visit to Tunisia.

While the UN Special Rapporteurs on freedom of religion or belief have repeatedly called for more inclusive societies and the decriminalisation of blasphemy, what we witness in online and offline discourses is diametrically opposite. Online hate speech on the basis of religion frequently leads to self-censorship, physical threats and extra-judicial killings, and the repression of free speech in academic, artistic and political spheres. Religion is used to target individuals perceived as deviants, which often happens in the case of women and sexual minorities. There is a marked increase in the rate of endorsement of acts of discrimination against minorities in purported defence of national religious traditions. APC will be advocating for defending expression and diversity of religion and belief or non-belief in the digital age at HRC40, including by organising a side event on Thursday, 7 March on this topic (more details above). The Council will consider a resolution on freedom of religion or belief, presented by the European Union.

The report identifies the additional, intersectional gendered risks that WHRDs face and recognised their important role in the protection and promotion of human rights. In particular, the report highlights that WHRDs are often subjected to online harassment, violence and attacks, which include threats of sexual violence, verbal abuse, sexuality baiting, doxing and public shaming. For example, WHRDs are maligned by “deepfake” videos, in which images and videos are manipulated to create computer-generated replicas of them saying and doing things they have not done.

In consultation with women defenders, the Special Rapporteur identified eight interconnected priorities for action that require attention, resources and cooperation among states, national human rights institutions, donors, civil society, human rights defenders and other stakeholders. Priority 6 recognises that security must be understood holistically and that it encompasses digital security, in addition to physical safety, environmental security, economic stability, the freedom to practice cultural and religious beliefs and the mental and emotional well-being of women defenders and their families and loved ones. In the face of online gender-based violence and increased surveillance, the Special Rapporteur notes, digital security has become increasingly important. APC supports the Special Rapporteur’s recommendation to prioritise the protection of WRHDs in online spaces and adopt laws, policies and practices that protect their right to privacy and protect them from libel and hate speech.

The Council will consider a resolution on the situation of human rights defenders working on rights related to land and environment, presented by Norway.

Over the past decade, Israel has expanded its power and control over Palestinians to include the virtual sphere in a move that APC member 7amleh has described as “digital occupation”. While the rise of social media has fostered new forms of activism, mobilisation and resistance to hegemonic power among Palestinians, it has also emerged as a new space for control and rights violations. Censorship, surveillance and control of Palestinians’ virtual space has also been exercised by the Palestinian Authority in the West Bank and Hamas in the Gaza Strip as a means to silence dissent. 7amleh will be raising awareness at the HRC about digital occupation, and in particular laws restricting the human rights of Palestinians through regulating the internet, including by organising the side event “Digital occupation: Surveillance and censorship in Israel Palestine” on Tuesday, 19 March (more details above).

The Special Rapporteur on the promotion and protection of human rights and fundamental freedoms while countering terrorism will present her report on the abuse of counter-terrorism laws to target civil society, as well as reports of her visits to Tunisia, Saudi Arabia, Sri Lanka, France and Belgium. Counter-terrorism laws are often vaguely worded and instrumentalised to stifle freedom of expression, crush dissent, and crack down on civil society. Several governments already routinely label political opponents, journalists, and independent civil society organisations and human rights defenders as “terrorists”. When it comes to online spaces, counter-terrorism measures are used to prohibit targeted people’s access to the internet, ranging from blocking of lawful online content to blanket bans of specific platforms or encryption services. Governments are increasingly working with private companies to get them to “voluntarily” monitor or remove lawful content on the basis of its alleged connection to terrorist activity. These measures often lead to overcompliance by companies, to avoid facing the substantial fines they would face for not complying. They lack proper procedural safeguards and pose a serious danger to the rights to freedom of expression and privacy online.

A report of the UN High Commissioner for Human Rights on the protection of human rights and fundamental freedoms while countering terrorism will also be considered during the session. The report focuses on the intersection of child rights and terrorism, and emphasises the freedom of expression, access to information and right to privacy of child victims and witnesses of terrorism, as well as of children at perceived risk of recruitment by terrorist groups. Where children have regular internet access, the report notes, online peer networks may expose them to harmful content and influence their vulnerability to terrorist recruitment. It recommends that any counter-terrorism measures that may interfere with the child’s right to privacy should be in accordance with due process and be necessary and proportionate to achieve a legitimate aim. Children should have the right to know that personal data concerning them has been retained and processed, to access the data, to rectify data that is inaccurate or outdated and to delete or rectify data unlawfully or unnecessarily stored.

The Council will consider a resolution to renew the mandate of the Special Rapporteur, presented by Mexico.

The Special Rapporteur in the field of cultural rights marks the 10th anniversary of the mandate on cultural rights and the 70th anniversary of the Universal Declaration of Human Rights by focusing her report on suggested strategies for advancing cultural rights over the next decade. She recognises a number of critical issues that represent gaps, require further attention, or new and emerging questions for the next 10 years of the mandate, including the impact of social media and the internet on cultural rights. Not only does the internet facilitate new forms of accessing, expressing, sharing, and preserving culture, but new technologies can enable individuals, groups, and communities advocating for cultural rights to connect securely. The internet and ICTs are critical for those who are often marginalised in society, including women, LGBTQI people, displaced peoples and people with disabilities. However the significant gaps in affordable, high quality access to the internet for reasons of income, education, gender, language, geographic location, and other economic, social and cultural factors remains a pressing concern in the realisation of people's cultural rights. APC welcomes the Special Rapporteur's focus on this important issue. We will continue advocating for increased attention to the impact of the internet and ICTs on economic, social and cultural rights through our interventions at HRC40.

The Council will consider a resolution on the question of the realisation in all countries of economic, social and cultural rights, presented by Portugal.

The following outcomes of UPR reviews which include recommendations relating to the internet and human rights are being adopted at HRC40 on 14 and 15 March.

Saudi Arabia: Saudi Arabia received a number of recommendations relating to cybersecurity, counter-terrorism and anti-cybercrime laws, and protection of human rights defenders and media freedoms, which it will respond to during HRC40:

China: China received the following recommendations on freedom of expression and press freedom on the internet, quality of universal internet access services, bridging the digital divide, and online criminal activities, which it will respond to during HRC40:

Nigeria: Nigeria received the following recommendation on the right to privacy, which it will respond to during HRC40:

Malaysia: Malaysia received the following recommendations, which it will respond to during HRC40:

Congo: Congo received the following recommendation, which it will respond to during HRC40: