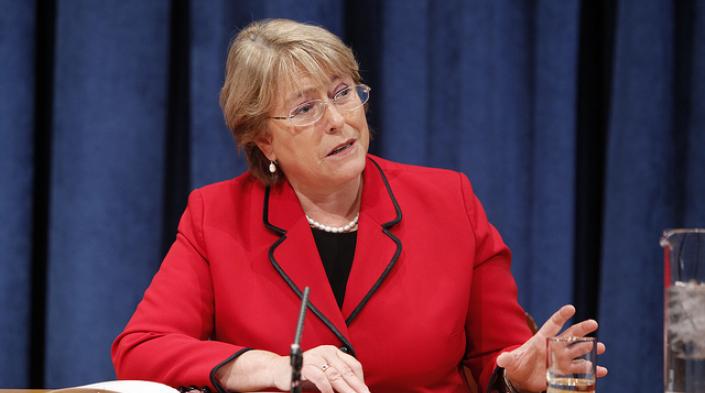 On 10 August, Michelle Bachelet was confirmed as the new United Nations High Commissioner for Human Rights. The High Commissioner for Human Rights is the highest-ranking official in the UN system on human rights. Her voice carries significant weight in calling out and addressing human rights violations and advancing norms, both in the UN and for broader public opinion. APC sees great value in the role of the High Commissioner, who has the ability to rise above the politicised environment that often shapes UN spaces and be a fearless and relentless champion of human rights.

The outgoing High Commissioner Zeid Ra’ad Al Hussein chose not to pursue a second term in the office, voicing concern that in the current geopolitical context, staying on "might involve bending a knee in supplication; muting a statement of advocacy; lessening the independence and integrity of [his] voice.” Zeid was an outspoken critic of human rights abuses regardless of where they occurred, recently expressing outrage at the United States and other world powers, which he criticised for retreating from their historical commitment to human rights. During his mandate, Zeid also condemned and called for investigations into attacks on human rights defenders, journalists and bloggers who used the internet to exercise their freedom of expression. For example, in response to the murder of blogger and human rights activist Yameen Rashid from the Maldives, Zeid called for an immediate investigation and for the government to ensure the safety of dissidents. He also weighed in on critical internet-related policy issues, taking a strong stand in favour of encryption and its importance for the exercise of fundamental human rights in the Apple-FBI case. Under Zeid's leadership, the Office of the High Commissioner for Human Rights (OHCHR) issued important substantive reports on internet rights issues, such as its 2017 report on ways to bridge the gender digital divide from a human rights perspective and its recent report on the the right to privacy in the digital age.

Previous High Commissioners have each brought their own style to the role. Navi Pillay, the first (and only) High Commissioner for Human Rights from Africa, brought to the position her capacity as an African, a South African, and a campaigner for social justice and human rights in her home country. Bachelet, a former president of Chile and former executive director of UN Women, also brings valuable political and personal experience to the position which can enrich how she performs in this role, especially her track record in working for women's human rights.

Bachelet is coming to the post of High Commissioner for Human Rights at a critical time, when human rights are under constant attack, persistent challenges remain, and new threats are emerging. Authoritarian regimes, the weakening of institutions, and growing disregard for due process pose significant barriers to the enjoyment of human rights all over the globe. What appears to be less and less respect for tolerance of different views and perspectives and shrinking space for civil society also contribute to a hostile environment for human rights. The withdrawal of the United States from the Human Rights Council, however shortsighted and misguided, can be seen as a shifting of attitudes and a symptom of the growing acceptability of retreating from human rights norms in parts of the world where this was not expected.

As an organisation and network committed to advancing human rights and social justice through information and communications technologies (ICTs), we urge the new High Commissioner to pay close attention to the ways that the internet and digital technologies impact human rights. Already the internet has made contributions to advancing freedom and the exercise of rights; however, it is increasingly being restricted in ways that mirror and extend violations of rights offline. Digital technologies have also given rise to new types of human rights violations that warrant careful attention and response. With this in mind, the APC community has developed a list of priorities for the High Commissioner for her consideration when beginning her four-year term on 1 September: