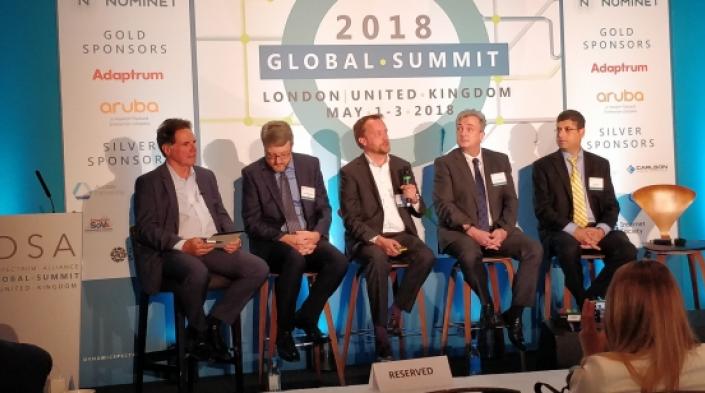 The international consultation spaces are being used to advocate and push for complementary approaches to internet provision to the dominant paradigm of mobile operators meeting this need. Community networks (CNs) are being rationalised and grouped as the latest of social movements, where a group of committed institutions and individuals are collectively working towards alternative telecom mechanisms from the ground-up. The communities themselves will meet their communications (voice, intranet, internet etc.) needs through local community-run provisioning of telecom infrastructure.

In this column we explore specifically the spaces and processes where there is an effort to build movements, networks and momentum around CNs. This article was written collaboratively with Dr. Carlos Rey-Moreno through an email conversation. Dr. Carlos Rey-Moreno is a telecommunications engineer with a background on development studies. Carlos has been involved in rural connectivity projects in underserved areas for more than twelve years, initially with the EHAS Foundation in Latin America, and more recently as one of the founders of Zenzeleni Networks, a community-owned ISP providing affordable communications in rural Eastern Cape, South Africa. In studying how to scale Zenzeleni Networks, he has become one of the most knowledgeable people about the community networks movement in Africa by participating in the deployment of another community network in Namibia, mapping the community network initiatives in the continent, co-organising the first two editions of the Summit of Community Networks in Africa, and authoring an in-depth report on the topic. He was also involved in the initial stages of the LibreRouter project, an initiative to create software and hardware solutions to facilitate the deployment of community networks.

The interviewers are Kathleen Diga, Nic Bidwell along with Namita Aavriti. Kathleen has worked for over 10 years in the information and communication technology for development (ICT4D) research space, and she is currently coordinating the publication of the Global Information Society Watch 2018 on local community networks across the world. As the Social and Gender Impact Facilitator and Advisor in the Local Access project, Nic Bidwell explores how and why people coordinate, interact with, and are affected by, their local Community Network for six initiatives in the global south, and later in this column will write about gender in relation to research in community networks. Namita Aavriti is a writer and researcher, and currently the editor of Genderit.org. She recently completed the mapping of research in the sub-field of gender, feminism and technology.

GenderIT.org:  What do you see as the promise of community networks for “connecting the unconnected”? How open are groups and other spaces, including local and regional spaces to conversations around CNs?

Carlos Rey-Moreno: According to the International Telecommunication Union, more than one billion people do not have access to basic voice communications and more than three billion do not have access to internet connectivity. Even if they have access, many people face cultural, economic and social barriers to communicating. Despite these shortfalls, global access to communications is increasing thanks to the mobile revolution. But not fast enough. The association of mobile network operators, the Global System for Mobile Communications (GSMA), acknowledges that with their current model it will take them at least seven years, until 2025, to connect the next billion to the internet. In this context, complementary telecommunication infrastructure models not only speed up the pace at which the other half of the world will come online, but also complement existing models in making communications accessible to all.

Among the different models available, community networks – telecommunications infrastructure built by the community for the community, are proving to be particularly effective in realising the goal of universal and affordable access to ICTs. In many cases this means, the unconnected connecting themselves. However, due to the pervasiveness of the idea that telecommunications infrastructure is something that only large companies can do, few people know that they are not only capable of setting up their own telecommunication networks, but community-run networks are a reality in many places. This lack of awareness is very obvious not only among regulators and policy makers as is evident from the earlier column on gender and community networks, but among other donors and other civil society organisations.

In this sense, the work to create a more enabling regulatory and policy framework for small operators and community networks, needs to be accompanied by a movement building component that is able to support and use those opportunities. Movement building is one of the main pillars of the work that APC does in community networks, and I’m the one coordinating it. Among the activities conducted in this activity area, we compile a monthly newsletter that crowdsource all the relevant information on the community networks “world”. You can find past numbers and a link to subscribe here. Additionally, we have been very active, and successful in convening workshops and panels in different conferences and events that show an interest in discussing solutions to “connecting the unconnected”.

GenderIT.org: There has been an increase in attention to gender representation in forums such as the Internet Governance Forum (2017 in particular) and DC, and also recently we have seen more women as part of sessions on community networks as well. Broadly in science, technology, engineering and mathematics (STEM) related fields, telecommunications is the worst in terms of gender parity, though it is hard to get reliable statistics for each sector of IT, and easier to do this for the broader picture of STEM.

There have been some studies on the different uptake within STEM for women. One way to see the difference is to look at take up at university -- “Among STEM graduates aged 25 to 34, women accounted for 59% of those in science and technology programs, but accounted for 23% of those who graduated from engineering and 30% of those who graduated from mathematics and computer science programs.” Another lens is to look at women in power in telecommunications companies. E.g. "In three-quarters of the companies surveyed, women accounted for less than 40% of the total workforce and represented less than 20 per cent of senior leadership positions, while the proportion of women at senior levels was found to be generally half of the proportion of women at entry-level in most regions, with the exception of North American firms (GSMA & A.T. Kearney, 2015)." and "between 1972 and 2016, only two women held a CEO position at an S&P 500 company in the telecommunications industry" and " S&P 500 companies, women held 19.2% of Board seats and 25.1% of Executive Senior Level Management positions. In stark contrast, only 4.2% of CEO positions were held by women". (Catalyst 2015) Women made up just 26 percent of computing professionals in 2013, a substantially smaller portion than 30 years ago and about the same percentage as in 1960. For some crude comparisons, compare 48% women accepted in undergraduate (all science), 58% women accepted in biology, 55% women accepted in medicine, 30% women accepted in physics and 13% women accepted in computer sciences and just 10% women accepted in all engineering streams. Further as is from the same study, women who do graduate in computer sciences are much less likely to go on to be computer professionals.

What is your sense of gender parity in this space – of building a movement around community networks? Do these activities for awareness raising and movement building around CNs involve women and help women to break cultural boundaries?

Carlos: Based on our observations in various movement building activities, the community networks ecosystem is predominantly occupied by men. There is lack of gender equality in other as well. Most awareness raising platforms with community network focus at conferences and events are filled with men.

Being part of an #allmenpanel is not something I’m very proud of, actually it is pretty uncomfortable. And worse than that is not being invited to the platform to share your experience, as is the case for most women. Sadly this happens more often than not. A couple of weeks ago I ended up being part of another such panel.

This lack of gender diversity and parity in these spaces is not only harmful in itself, as we lack the very valuable perspectives from women in these debates, and we lose the opportunity to create a broader movement. As in many other fields, the lack of visibility of female role models creates a barrier for others to become active in the space.

What I find interesting is that in the case of community networks, there is no shortage of work done by women. The experience of women working in tasks related to the services provided by Zenzeleni Networks is similar to what has been observed in the field trips conducted by the LOCNET team this year. Women do work and participate in community networks, however, their work becomes invisible because it is not done in the public venues for discussion. What in a local context can be described as a cultural practice, in the international arena to a broader audience is often about a speaker’s lack of confidence and/or experience speaking in English, parenting and other familial responsibilities of women. And further most of these panels are predominantly white and male-dominated, as my colleagues often point out.

GenderIT.org: Is it possible to bring up the lack of female presence to the organisers of the panel? How easy do they make it for you to mention your discomfort, and do other men support you when you raise the issue? What excuses are given to you and what efforts are you making towards changing this?

Carlos: In the LocNet project, we are aiming to contribute to change this trend, with trying to maximise women's participation in the panels on community networks that we organise, or where we are given the chance to contribute to those organised by our partners. We do not always succeed. There is an inertia of sticking to known faces, and most of those are men. Although I would say that proposals are well received and there is considerably more awareness and intent.

Also we try this by bringing the topic of women participation into the discussion. Looks like there will be a session about it in the plenary of the forthcoming Summit on Community Networks in Africa. But also, bringing the topic of community networks to venues and spaces which are created and held by women particularly in the technical sphere, like at the AfChix summit. Another instance would be doing this very same column.

Does it really change anything? I don’t know. It is difficult to measure the impact of these actions, and even more difficult to attribute it to our little contribution. But the optimist in me senses that something is cooking, that women are being more vocal and are creating networks and spaces to make their voices heard.

We are not alone in this change, and in some of the conferences where community networks are discussed, gender parity is a must, like the criteria in re:publica 2018. This year’s session guidelines of the Internet Governance Forum seem to give more attention to this issue. Let’s hope it is enforced in the selection process.

However, this forced parity might have side effects. In a conversation with a friend at re:publica, she told me she had been invited to a panel for being a woman and not for being an expert on the topic – and how dis-empowering this actually was. It seems easy to fail into the trap of ticking boxes and meeting quotas.

I don’t know what is the right approach, but what is obvious is that diversity will enrich the discussions around community networks and make the movement bigger and stronger. We are trying to change this trend, being cognisant of the challenges, seeing how pervasive patriarchy is in this domain. I’m sure there is loads of room for improvement, and critiques, recommendations, etc are more than welcome. Looking forward to the discussions!

This interview was originally published by GenderIT.org.