EngageMedia: On recent internet blocking and throttling in West Papua 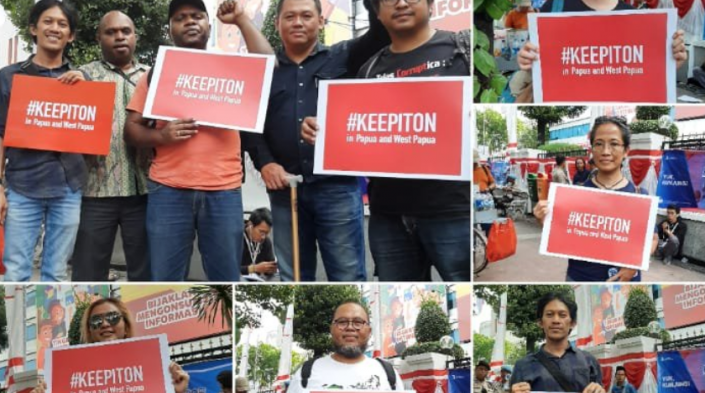 By Rezwan Islam for EngageMedia

This article was originally published on the website of APC member organisation EngageMedia.

As an organisation that stands for media freedom and digital rights, EngageMedia finds the recent threats against freedom of expression in West Papua concerning, including undue restriction and harassment, as well as internet blocking and throttling. UN Human Rights Council experts have urged the Indonesian government to protect the rights of activists in Papua and to allow unrestricted access to communication and information.

News and reports from people on the ground are still coming, but as with any complex and complicated issue, adding more context can help everyone’s understanding. Below are some links from different media sources and videos on EngageMedia.org that we hope will shed more light on this still developing story.

Last month, civil unrest spread in the province of West Papua following a raid on a student dormitory and arrest of students by Indonesian soldiers in Surabaya, East Java. The situation escalated after a photo of an Indonesian flag allegedly thrown into a sewer spread ahead of the country’s independence celebration on August 17.

The soldiers allegedly made racist comments about the students (calling them “monkeys“) and brought over 40 students to police headquarters, who were later released.

Incidents like this are not new, as Papuans have experienced racism elsewhere in Indonesia.

As reports about the incident emerged, protests broke out in Manokwari, the capital of West Papua, denouncing the arrests of the students. Protesters set on fire several markets and government buildings, such as the West Papua Legislative Council building. The Indonesian government sent in additional police and military forces.

To control the spread of unrest, the government took additional measures to control misinformation and fake news about the unrest by systematically throttling internet connectivity in West Papua and Papuan provinces.

Reports by Netblocks showed that internet services were  disrupted amidst renewed calls for an independence referendum from separatist groups.

Bellingcat, “an independent international collective of researchers, investigators and citizen journalists using open source and social media investigation to probe a variety of subjects,” alleged that “an automated bot network is being used on Twitter and utilises other major social media platforms to disseminate propaganda about the Indonesian Government’s involvement in West Papua, and that it is doing so by using hashtags on genocide and the West Papua freedom movement to drown out any anti-Indonesian government narrative.”

There were reports of restricting foreign journalists in Papua in the past which the government denied. In 2017, two French journalists were deported from Papua, even though they were only doing a story on malnutrition.

Papuan activists have taken to the streets to demand independence before, and incidents of armed resistance to Indonesian rule have occurred over the years.

According to a recent report, the internet is still blocked in six areas.

Below are some videos to add more context about the issue:

This video posted by Papua Pride in EngageMedia shows how in 2016, hundreds of police burst into a West Papuan dormitory in Yogyakarta, Indonesia, assaulting the students:

This video published in EngageMedia in 2015 shows the extra-judicial abuse of security forces against Papuan activists:

Last year,  the police arrested over 1,000 activists, community workers, students, and youth in a crackdown following a series of marches, where thousands of West Papuans demonstrated in support of the United Liberation Movement for West Papua. Watch this video for more:

In 2006, Amos Wainggai, along with 42 other Papuans, crossed the sea on a small motorboat to seek asylum in Australia. In this video, he tells of the oppression by soldiers that has long been ignored or abetted by successive Indonesian governments.