Despots and disruptions: The greater the tendency to authoritarianism, the higher the chances of internet shutdowns

Home / News / Despots and disruptions: The greater the tendency to authoritarianism, the higher the chances of internet shutdowns 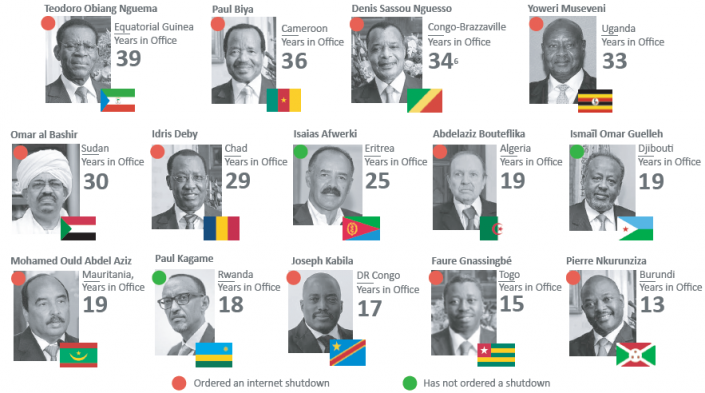 The year 2019 started with five African countries – Chad, Democratic Republic of Congo (DRC), Gabon, Sudan and Zimbabwe – facing internet disruptions, a very dangerous trend that reveals a rise in authoritarianism on the continent. This is the focus of Despots and Disruptions: Five Dimensions of Internet Shutdowns in Africa, a recently launched study by APC member Collaboration on International ICT Policy for East and Southern Africa (CIPESA).

The greater the tendency to authoritarianism and the fewer democratic principles a state has, the higher the chances are that its rulers will implement internet shutdowns, which are particularly prevalent during electoral periods and in the context of protests against government policies, the research reveals. Of the 22 African countries where internet disruptions were ordered in the last five years, 77% are authoritarian and the rest are semi-authoritarian regimes. On the other hand, none of the African countries that were categorised as a “full democracy” (Mauritius) or "flawed democracies" (Botswana, Cape Verde, Ghana, Lesotho, Namibia and Senegal) had ever ordered a network disruption.

The research also shows that disruptions are correlated with the longer a leader has stayed in power. Of the 14 African leaders who had been in power for 13 years and more (either through coups or inheriting power from their fathers who led for decades), 79% have ordered shutdowns, mostly during tense election periods, anti-government protests, or coup attempts.

These disruptions also present economic and social impacts. "If just five of the countries that have previously disrupted internet access and who are going to the polls this year disrupted access to internet including apps such as Twitter, Facebook and WhatsApp at a nationwide level for five days each, the estimated economic cost would be more than USD 65.6 million," CIPESA notes.

According to CIPESA's Juliet Nanfuka, "This is evidence-based research that directly links shutdowns to despotism and other elements of bad governance. All democracy-loving countries should therefore be expected to not want to be associated with disruptions. Moreover, it has made the case that shutdowns, besides affecting the state of democracy and individuals’ rights, also affect the economy in the short and long term, which can be used by advocacy groups or groups that litigate against shutdowns."

"It is like being cut off from the world"

"It is like being cut off from the world", Kinshasa-based digital rights activist Françoise Mukuku told APCNews in an interview we conducted for a report on the effects of internet shutdowns on everyday life. "The frustration of not knowing when it will be back, topped up with the shame of having to call your friend in Europe, giving them your password so they can access your email on your behalf and retrieve the phone number of a very important contact. Almost in tears because you can't meet your work deadlines."

"Suddenly you are not able to browse on your mobile phone, you open up your laptop but still cannot connect," said Arsène Tungali, executive director of APC member Rudi International, based in the DRC. "You call a friend to ask them whether they are able to connect to the internet, they tell you they wanted to call you as well to check. You then realise that the internet has been shut down and it's like you are going ten centuries behind, the world stops in front of you as you can no longer read your emails, cannot check your WhatsApp messages, cannot browse any other social media. It is so frustrating. You feel powerless and weakened by those who have power."

From Harare, human rights activist and African School on Internet Governance (AfriSIG) alumnus Nomagugu Nyathi told us, "We had a complete shutdown from yesterday morning and we have only just been connected. But the over 24 hours without internet had a very isolated feeling. Most of all, it felt like power and the right to organise have been taken away. I felt that anything could happen to us in the country and the world would have no clue."

Despots and Disruptions ends with a question: “Could 2019 be the year of most internet shutdowns in Africa?” With several nations set to conduct elections during the course of 2019, many more shutdowns could be witnessed. However, there are also progressive developments that could discourage disruptions, including states taking a more public stance against them and using social media platforms to engage citizens and share public information. In addition, litigation against shutdowns is gaining ground in countries such as Cameroon, Chad, Togo, Uganda and Zimbabwe. Outrage against these violations of rights is building up, and so are initiatives in solidarity with those who suffer them, such as the #KeepItOn campaign.

What is an internet disruption (often referred to as internet shutdown)?

Collaboration on International ICT Policy for East and Southern Africa (CIPESA) is the leading centre for research and analysis of information aimed at enabling policy makers in east and southern Africa to understand international ICT policy issues. In particular, CIPESA focuses on decision making that facilitates the use of ICT in support of development and poverty reduction.