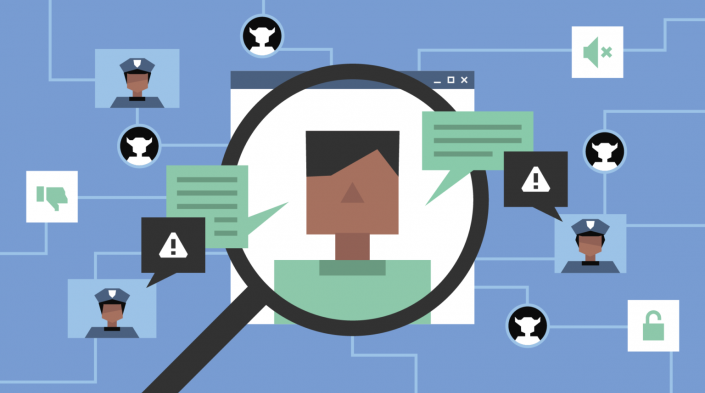 In Indonesia, a multi-ethnic country of 270 million citizens, a rise in hard-line approaches to governance is heralding a looming authoritarianism. The COVID-19 pandemic provided the Indonesian government with the opportunity to accelerate digital authoritarianism, invoking the spectre of “guarding national security” and “creating stability during the COVID-19 pandemic”.

In 2020, Indonesia ranked 64 with a score of 6.30 in The Economist Intelligence Unit’s Democracy Index, putting it into the “flawed democracy” category. While the 2021 index showed the country improving to rank 52, there are still significant obstacles for the exercise of democracy. Various reports from Freedom House, IDEA, and Reporters Without Borders, for example, highlighted the problem of shrinking civic spaces, both on and offline. Several national reports have come to the same conclusion: in 2020, a survey by the Indonesian National Human Rights Commission showed 29.4 percent of Indonesians felt they were not free in expressing criticism of the government. Meanwhile, 52.1 percent of respondents in an April 2021 survey conducted by LP3ES and published in Tempo.co (which caters mostly to the urban middle and upper class) said they were afraid to express their opinions and form associations.

The number of internet users In Indonesia is now 204.7 million as of January 2022, representing 73.7 percent of the total population. As more of public life goes online, so do government attempts to restrict people’s rights and freedoms.

I head the Southeast Asia Freedom of Expression Network (SAFENet), a regional organisation focused on promoting and protecting digital rights in Southeast Asian countries. In 2020, we released a report titled “The Rise of Digital Authoritarianism”, which recognised democratic regression in Indonesia.

Alina Polyakova, president of the Center for European Policy Analysis, and Chris Meserole, Director of Research at the Artificial Intelligence and Emerging Technology Initiative, define digital authoritarianism as “the use of digital information technology by authoritarian regimes to surveil, repress, and manipulate domestic and foreign populations”. Since 2019, Indonesia has seen an acceleration in the indicators of digital authoritarianism: online censorship, cyber surveillance, and internet shutdowns.

When the pandemic hit Indonesia in March 2020, President Jokowi instructed state intelligence bodies to ensure public order to quell public fears and panic. A month later, police started to actively control narratives about the COVID-19 situation in the country, especially on social media. For example, on April 4, 2020, the National Police Headquarters issued Telegram Letter No. ST/1100/IV/HUK.7.1/2020, which instructed the police to carry out cyber patrols to monitor online opinions and to take action against those spreading hoaxes about the pandemic, government policies, and those insulting the President and the government. Amnesty International reported that at least 57 people were arrested for spreading “false news”.

In February 2021, the government rolled out a “virtual police” that would patrol online platforms to monitor content posted by citizens, with an intended aim of reducing crime related to the Electronic Information and Transaction (ITE) Law. With this setup, police had the power to send virtual alerts directly to social media users, warning them and ordering them to delete posts deemed unlawful. Between February to March 2021, the virtual police had sent out warnings to 89 social media accounts for spreading content tagged as hate speech. This virtual police creates a new fear that limits privacy and freedom of expression for Indonesians.

The PeduliLindungi app, launched during the start of the pandemic, has also posed privacy and digital security concerns. Initiated by Indonesia’s Ministry of Communication and Information Technology (MCIT) and the Ministry of State-Owned Enterprises (MSOE), it was designed to track people’s exposure to COVID-19. Audits conducted by DigitalReach and CitizenLab flagged several privacy issues with the application, particularly regarding excessive permissions and unnecessary features. For instance, in its 2020 report, CitizenLab noted that the app collects users’ WIFI MAC addresses and local IP addresses, which can help identify users and are not necessary for contact tracing. The app also sends the device’s location information and user info to the developers’ servers, allowing them to track the physical locations of the devices.

In its 2021 Indonesia report on human rights practices, the US Department of State noted “NGO concerns about what information was gathered by the application and how this data was stored and used by the [Indonesian] government” under a subsection on unlawful interference with privacy. While the Indonesian government asserted that measures have been taken to address security concerns in the app, concerns remain on the data security of users. The application was also extended for vaccine certificates and then as a system of digital gating, denying access to the unvaccinated to malls, shops, and other locations. There are unresolved questions on who owns the users’ data.

The pandemic provided law enforcement officers with an opportunity to employ the ITE law to exert excessive restrictions on freedom of expression. The law, which aimed to prosecute cybercriminals, contains several provisions that expand the government’s power to punish social media commentary. Under this draconian law, activists using their social media accounts to express dissent may face criminal charges related to hate speech, online defamation, or even treason, as in the case of Papuan activists.

The ITE law has become a weapon used by the state to silence critics, although it is also widely used by politicians and businessmen against their critics. It is increasingly used against ordinary citizens, activists, and journalists, especially those investigating environmental and human rights violations. The number of charges filed under the ITE Law’s defamation clause has increased: from 24 in 2012 to 84 in 2020, and 91 in 2021. Some of these charges stemmed from criticism of the government’s COVID-19 response. In September 2021, for instance, the Presidential Chief of Staff filed defamation accusations against two Indonesia Corruption Watch researchers over a study that they conducted. The study alleged that various government officials were involved in promoting the use of the drug Ivermectin during the pandemic.

Meanwhile, attacks using sophisticated digital technology have also been used as a form of online repression. The National Human Rights Commission (Komnas HAM) said that between 2020 and 2021, they received reports of hacking incidents against critical media, organisations, and individuals – all while the pandemic had been impacting the country. One such case was that of researcher Ravio Patra, a critic of the government’s pandemic response. He was arrested for allegedly broadcasting a message that “incites hate and violence”, but rights groups maintain that his account had been hacked. There have also been similar incidents against online media tirto.id, in which an unknown hacker removed news articles critical of the Indonesian intelligence agency’s role in the pandemic response.

Technological oppression in the form of digital attacks is getting worse. According to a SAFEnet digital rights situation report in 2020, at least 147 digital attacks occurred in 2020 alone. Almost all of these digital attack cases were related to those who criticised government policies on various issues, particularly the pandemic response. In 2021, the number of digital attacks rose to 193, with an average of 12 incidents per month.

A report by Diponegoro University revealed the Indonesian government’s use of cyber mercenaries (locally known as ‘buzzers’) to raise support for controversial policies amid the COVID-19 pandemic.

This manipulation was conducted by buzzers, fluid networks of sockpuppet accounts, influencers, content creators, and political consultants who work together to orchestrate public opinion on social media by creating a particular narrative on certain political issues. Cyber mercenaries are typically funded by politicians, political parties, and business people. These cyber mercenaries operate by spreading hoaxes, disinformation, doxing, and trolling.

During the height of the COVID-19 crisis, these cyber troops were deployed to rally public support for the government’s New Normal policy, which urged citizens to carry on with their normal activities while observing health protocols. In June 2020, several local governments and civil society groups pushed for lockdowns to curb transmissions. In response, a number of central government agencies solicited influencers for the New Normal campaign to promote economic recovery. Their strategies involved amplifying news reports – mostly from media outlets owned by media moguls cum ruling party politicians — that underplayed the deadliness of COVID-19, as well as harassing and doxing critics of the government’s pandemic mismanagement. The aim of this combined deployment of sockpuppet accounts and influencers was two-fold: to promote a singular national narrative that COVID-19 was not a deadly crisis, while also deterring opposition from civil society and local government actors with dissenting policies.

These strategies have been successful in co-opting the Indonesian digital public sphere and preventing it from becoming a free space where the voices of civil society can be heard. In this regard, the online public opinion manipulation by cyber mercenaries can be seen as one of the most significant signs of the rise of digital authoritarianism in Indonesia.

Civil society in Indonesia needs to push back against this democratic regression to prevent the country from falling into the abyss of authoritarianism.

Damar Juniarto is a human rights activist known for his work on digital rights and online freedom of expression in Southeast Asia. Since 2013, he has been the Executive Director of Southeast Asia Freedom of Expression Network (SAFEnet). He also serves as Advisor at DigitalReach, a regional organisation that looks into the impact of technology on human rights in Southeast Asia. Damar has received accolades for his work, including recognition as one of Rest of World’s Global Tech Changemakers in 2022 and the Anugerah Dewan Pers (Indonesia’s Press Council Award) for promoting press freedom in Indonesia.