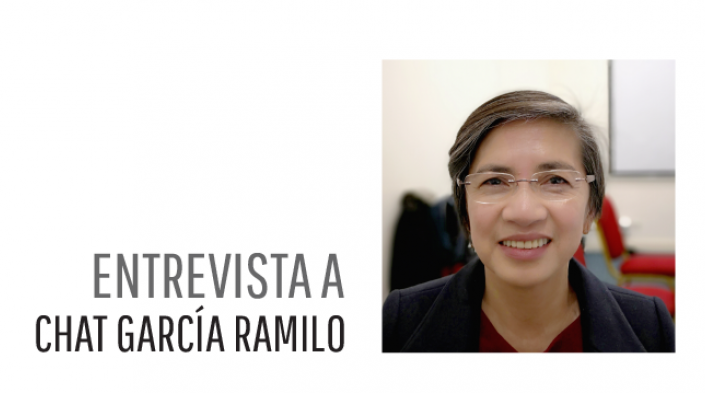 NIC Argentina, which is devoted to the growth of the internet and building society's trust in the internet in Argentina, interviewed APC Executive Director Chat Garcia Ramilo during the Internet Governance Forum (IGF) in Paris. The interview was originally published in Spanish on NIC.AR.'s website.

NIC.AR: If we want to create a culture of good practices in the "internet society", how can we work with internet users?

C.G.R:  A practice I think is really important is being connected. APC, being a global network, has members in different countries that work locally and they are constantly connected with the local internet users. This is the best way to work in order to identify what kinds of concerns or problems they have, how they use the technology, or even if they have access to it. For example, in 2005 we published a report about online harassment, especially against women. Thanks to the connection that our members have had with them we found out that they were experiencing a lot of issues, only for the fact of them being women. That’s when we decided to investigate about online gender-based harassment, and then lots of other issues came up. We started to think about different initiatives to address this problem and after all the work we did, 14 years later, we are in a place where we can influence public policies in order to recognise online harassment as a form of gender-based violence, and search and find answers from governments. If someone is a victim of gender-based violence online, we research what’s the responsibility of the platform, what kind of help she needs, how to avoid this and how to generate awareness and security in the virtual world. For all of this, being connected with the consumers of technology is very important, and also with the people or institutions that can develop policies to address the problem.

NIC.AR: In this effort to be connected with people or institutions around the world, what is it like to work with different governments, with their different political views, and how do you handle differences between countries?

C.G.R: The way to do it is learning from different experiences. A good practice taken by any government can influence others, that’s why it’s so important to encourage them. For example, I come from the Philippines and there it took more than five years to have a policy on data protection. One of our APC members in the country got a connection with Privacy International, an organisation specialised in that matter, and organised meetings with the members of Congress, who are the ones that develop policies in the country. We organised conferences with them and we helped to connect them with all kinds of specialists. From then we were able to advocate for a bill around data protection. It was a very productive thing to do, because not only have we encouraged the ones that make decisions in the Ministry, but also the legislators, and sometimes they don’t even talk to each other. I think our bill is about three years old now. And we all have learned a lot: now the principles around data protection come from the principles that had been developed internationally. And that’s been learned through those kinds of connections.

NIC.AR: Part of your work is to stay connected with people who have those types of issues, as well as to encourage the inclusion of voices that are not usually heard in discussions on policy issues or strategies to solve problems such as online bullying or cyberbullying. How do you stay connected?

C.G.R: APC has 58 organisational members in about 40 countries, so we are a big network. That’s why our connections are very strong. The way we stay connected, on one hand, is by bringing our members together in order to learn with each other. On the other hand, it’s also important to bring them to participate in the internet governance events, whether in a regional, national or international frame. For example, at LACIGF 11 [the regional IGF for Latin America and the Caribbean], we had 11 organisational members of APC, with whom we share similar concerns. In the panel “Challenges, achievements and experiences in community network management in Latin America", we connected two of them with people that are also in the same area. That’s how we generate links between organisations and associations from Africa, Latin America or Asia, to work in tandem in order to create a big community.

At the same time, we have members addressing issues like feminism on the internet or gender, and we bring them as well. So there's a thematic line: make regional connections, so we can promote them internationally, in the global IGF for example. We prioritise local participation, we want to have local voices, as well as the voices of the ones that could not be present in the discussion. In the IGF we promoted voices of sexual rights activists. This issue hadn’t been discussed before, that’s why we did research about the concerns of the LGBT community on the internet, to make it visible.

NIC.AR: Luckily, gender issues on the internet are increasingly visible in forums, spaces for debate and the media. But can we analyse problems such as connectivity, cybersecurity and others from a gender perspective?

C.G.R: I believe there’s always a gender perspective, in all issues. Gender is not only feminine or masculine, it is a spectrum that contains all different types of identities and sexualities and they all are being recognizsed as a right in many countries. This happens on the internet too, and it’s linked with the impact of the uses, the connections and the access. For instance, the problems women face are different from those faced by men. Issues related to power determine how people use and how they access the internet, or define who has the ability to influence and participate in making policy decisions. In this sense, the gender issues have an impact on everything. I believe the key to understand them is to take a look at the general context, what types of barriers people deal with, whether they are women or men, different genders, identities or different disabilities. You really need to take a look at what power dynamics are there to be able to see beyond. Not everyone has the same access to the internet, or can participate and decide on public policies on technology. So, I think, there’s are a gender dimension to the world we live in, unfortunately.