African School on Internet Governance: “Inspiring the next generation of internet governance leaders from Africa” 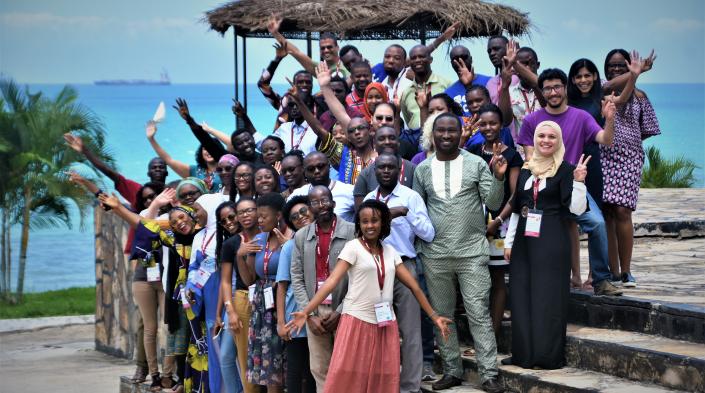 This article was developed through interviews with AfriSIG faculty members and organisers and with research from the 2013-2016 AfriSIG Tracer Study and the AfriSIG 2018 Report of Participants’ Evaluation.

The African School on Internet Governance (AfriSIG) is an annual five-day workshop organised by the Association for Progressive Communications (APC) in partnership with the African Union (AU) in 2018, and with the NEPAD Agency in previous years. Every school brings together 40 to 60 participants and faculty to discuss emerging issues in regional and international internet governance, with the aim of giving Africans from diverse sectors the skills, confidence and connections to engage with these issues in their local contexts as well as participate in pan-African and global policy discussions.

Since its inception in 2013, AfriSIG has consistently grown in scope and impact, quickly becoming a uniquely important capacity-building and networking event on the continent for a spectrum of stakeholders working in the internet governance space, including civil society organisations, government, the academic community and business. Using a mixed methods teaching approach that includes lectures, seminars, practical role-play exercises and mentorship from leaders in the field, the programme is designed both to hone the skills of current leaders and serve as a pipeline for emerging leaders in African internet governance to effectively participate in policy structures and decision-making processes to help “shape the future of the internet landscape for Africa’s development.”

This year’s school, the sixth iteration, was held in Zanzibar, Tanzania from 11-16 October, with an overall focus on Data Protection. Hosted by APC in conjunction with the African Union Commission, the event was, as always, a dynamic, immersive social and professional experience – one which was praised by fellows and faculty alike for its overall thematic relevance, robust and inclusive discussion and the strong camaraderie developed between participants.

In the wake of another successful school, it is worth reflecting on AfriSIG’s development and direction – how has it evolved since its inception and how might it continue to grow, in terms of diversity and representation, curriculum development and movement building? What are the most significant emerging issues in African internet governance and what kinds of skills and experience will be needed to respond to this rapidly changing, complex environment? Perhaps most importantly, how can we ensure that there is a wide range of voices participating directly and powerfully in that conversation? Considering these questions is a useful exercise at a moment when Africa is expanding its role on the international internet policy stage and becoming increasingly involved in and shaped by the 4th industrial revolution. To that end, this article brings together faculty and organiser perspectives gathered through interviews as well as results from participant research to better understand the school’s successes, potential areas of improvement and ongoing relevance.

One of the core tenets of AfriSIG is an emphasis on diversity and multistakeholder participation. This manifests not only in terms of curriculum priorities, but also in the programme’s selection criteria and process. Within the context of AfriSIG, the notion of diversity is multi-faceted. Organisers seek to represent a mix of countries, professional sectors and experience while ensuring gender parity. Thus far, the school has fared consistently well in this respect. Over the last six years, AfriSIG has drawn participants from 39 different African countries, and 53% of all fellows have been women. The gender representation within the faculty and resource staff has been equally balanced. Assessing this year’s cohort, AfriSIG faculty Bob Ochieng shared his “satisfaction with the improved diversity witnessed in the programme since inception,” noting particular growth in faculty representation. Faculty member Otto Saki echoed this sentiment, affirming the strong “mix of participants and fellows” as well as “technical [community], engineers, policy makers, advocates, etc.” APC’s Anriette Esterhuysen, meanwhile, noted that applications from and participation of women have increased since the school’s outset.

A few areas, however, were flagged for possible improvement and expansion. Esterhuysen raised a concern about a decline in applications from government officials, while Saki suggested that, in future, organisers should consider “how to reach persons with disabilities and other excluded groups who might have limited access to the level of content shared at the school.” He further recommended more deliberate inclusion of the private sector, particularly “local (African) companies that are emerging in many countries.”

In terms of content and curriculum, the range of topics covered within the school and the quality of discussion have, according to faculty and organisers, continually progressed. For Esterhuysen, “discussions of rights and gender topics, for example, are deeper than they used to be,” and the methodologies used by faculty have further enhanced this development, helping to “make discussion more sophisticated.” AfriSIG 2018 organiser Koliwe Majama similarly observed that “some critical discussions were held during the school relating to multistakeholder engagement, data protection laws, privacy and gender.”

One critique of the current approach, however, relates to the pace of workshops and time allocated to practical exercises. Saki, for example, suggested that having “less panels and panellists” might “allow for deeper conversations and engagement.” He also noted that centering the school around a specific theme might be a fruitful approach by permitting a “deep dive” on specific issues. To some extent, the annual practicum –  focused this year, for example, on the General Data Protection Regulation (GDPR) introduced in Europe – achieves this aim. However, an overall more thematically-driven curriculum is definitely worth considering.

At the same time, the breadth of subjects covered during the school has been recognised as a strength, and a way to ensure that those from different backgrounds are challenged to discuss subjects outside their expertise, and understand internet governance from multiple angles. According to faculty member Chenai Chair, “there is constantly a combination of individuals who are experts in their own field but learn something new under AfriSIG. For example, during technical sessions, you can identify those who belong to the technical community by their level of engagement versus in the gender discussions. This is not a lack of interest but an indication of the learning opportunity from being part of the school.”

While it can be difficult to quantify the tangible outcomes of events such as this that focus on capacity building and learning, this comment points to AfriSIG’s success in achieving its goals. Indeed, one of the most notable outcomes of the school has been increased skills and confidence amongst participants. In a tracer study of the 2013-2016 schools completed last year, 39 of 42 respondents said that participation in AfriSIG made a difference to them personally while 30 said it made a difference for their organisation or institution, and 31 said it made a difference beyond themselves and their organisation.

On an anecdotal level, organisers and faculty have also highlighted the noticeable change in participants over the course of the five-day event. Saki, for instance, remarked upon fellows seeming increasingly “empowered and enabled to engage” in these debates, while Esterhuysen emphasised how this capacity building translates in practical terms: “We see fellows being selected for leadership positions,” she noted, such as “the Internet Governance Forum (IGF) multistakeholder advisory group” as well as offering “input on policy processes” and producing influential “writing and analysis” in the field. One notable example of this growth was seen at this year’s Internet Governance Forum in Paris where AfriSIG 2018 alumnus Noha Ashraf Abdel Baky was asked to be the youth speaker, taking the opportunity to highlight the need for increased inclusion of youth, women and marginalised groups at the IGF 2019.

But beyond this individual level, the course’s impact is evident in the proliferation of schools of internet governance across the continent. As Ochieng highlighted, “we have seen Kenya, Tanzania and South Africa hold national schools of internet governance as well as the West African regional school of internet governance emerge,” almost all of which have either been organised by AfriSIG alumni or were inspired by the event. This, he emphasised, is a clear example of “localisation and replication of capacity-building efforts in the internet governance space in Africa that also contribute to multistakeholderism at a national level.” Majama similarly stressed that “AfriSIG continues to breed and mentor leaders in the space,” remarking that “within the first month after the [2018] school, some fellows have already started to engage with issues and will undoubtedly make a difference.”

Moving forward, there are many emerging issues and opportunities in regional internet governance that AfriSIG could incorporate into future courses. Esterhuysen highlighted access issues, data protection legislation, digital human rights and cybersecurity as burgeoning areas of interest, while Saki suggested that there is a need to “focus on laws and policies, access issues, costs, private sector roles, surveillance capitalism” and expand the discussion around “cybersecurity governance.” He noted, however, the importance of soliciting “input from fellows past and future, through surveys” to ensure that future school curricula align with the most pressing internet governance concerns facing Africa.

Multiple faculty and participants also emphasised the practical skills that they were able to hone through this year’s practicum exercise, with multiple fellows identifying it as the most valuable learning experience during the entire workshop. Ochieng and Esterhuysen, however, both suggested putting greater emphasis on debating and drafting legislation in future schools as well as practising developing policy submissions. In the evaluation of AfriSIG 2018, participants, despite indicating strong satisfaction with the curriculum, also shared a number of possible suggestions for future topics, many of which had little overlap, which is a testament to the breadth of topical issues in this field. Several respondents, however, also requested more in-depth coverage of topics that were covered, such as the technical aspects of internet infrastructure, national processes and gender and internet governance.

Despite these areas of possible growth, “the current model works really well,” says Esterhuysen. Certainly, the positive impacts of the past six years are already apparent and will continue to reverberate in internet governance debates and decision-making processes across Africa. It seems to be this sense of belonging to a growing network of leaders and advocates who can not only join but also shape internet governance and policy debates that is most valuable to fellows, faculty and organisers. When asked about their plans to use what they had learnt, this year’s fellows mentioned training and capacity building of others, writing policy briefs, influencing national policy development and engaging with wider communities working on internet governance, among many other possibilities. The ambition and scope of these plans is a revealing indication of the impact of the school, which Majama calls “a life-changing experience.” As Ochieng stresses, the school “should be proud of inspiring the next generation of internet governance leaders from Africa.”

As another cohort of AfriSIG graduates enters the internet governance field, equipped with tools and ideas from the course, this network of emerging leaders will just continue to expand. “It will be interesting,” Chair remarks, “to see how the class of 2018 progresses.”