Seeding change: Nupef works with community networks to support the right to communication of traditional communities in Brazil

How are APC members improving their communities' lives? In this column we're highlighting stories of impact and change by our members, supported by APC subgranting. Nupef Institute helps to improve communications conditions for traditional communities fighting for their rights in Brazil, mobilising community networks and promoting digital citizenship.

Although access to broadband internet has been growing in Brazil, there is still a huge gap in marginalised regions and populations, especially in rural areas: while 25% of the households in urban areas didn’t have internet access, the percentage increases to 48% when we look to Brazilian rural areas, indicates a recent ICT Households survey. To address these gaps, the Brazilian organisation Nupef (Institute for Research, Studies and Training) has been raising awareness about the many layers of access inequalities in the country.

As an autonomous non-profit organisation founded in 2009, Nupef's mission is to generate the conditions for the exercise of digital citizenship. The institute works towards the defense of democracy and other fundamental rights in Brazil, such as access to knowledge, freedom of expression, privacy and cultural diversity.

In the past years, they particularly focused on the impacts of such inequalities on the right to communication of both quilombola communities living in rural areas and over 300 thousand women who make their living from gathering babassu palm tree coconuts – known as quebradeiras de côco (coconut breakers) in Portuguese –  in forested areas, mainly in Brazil's Legal Amazon basin. Recognising that social movements and traditional communities still struggle to communicate in many of the areas where they live, Nupef has been building solid partnerships to help strengthen their political articulation, communications, economic development and security through the implementation of information and communications technologies (ICTs).

In 2019, Nupef used a catalytic interventions grant to make important improvements in the implementation of community networks in the state of Maranhão, together with quilombolas and babassu coconut breakers, in a participatory process that covered the decision making and installation of community network nodes as well as content creation workshops. 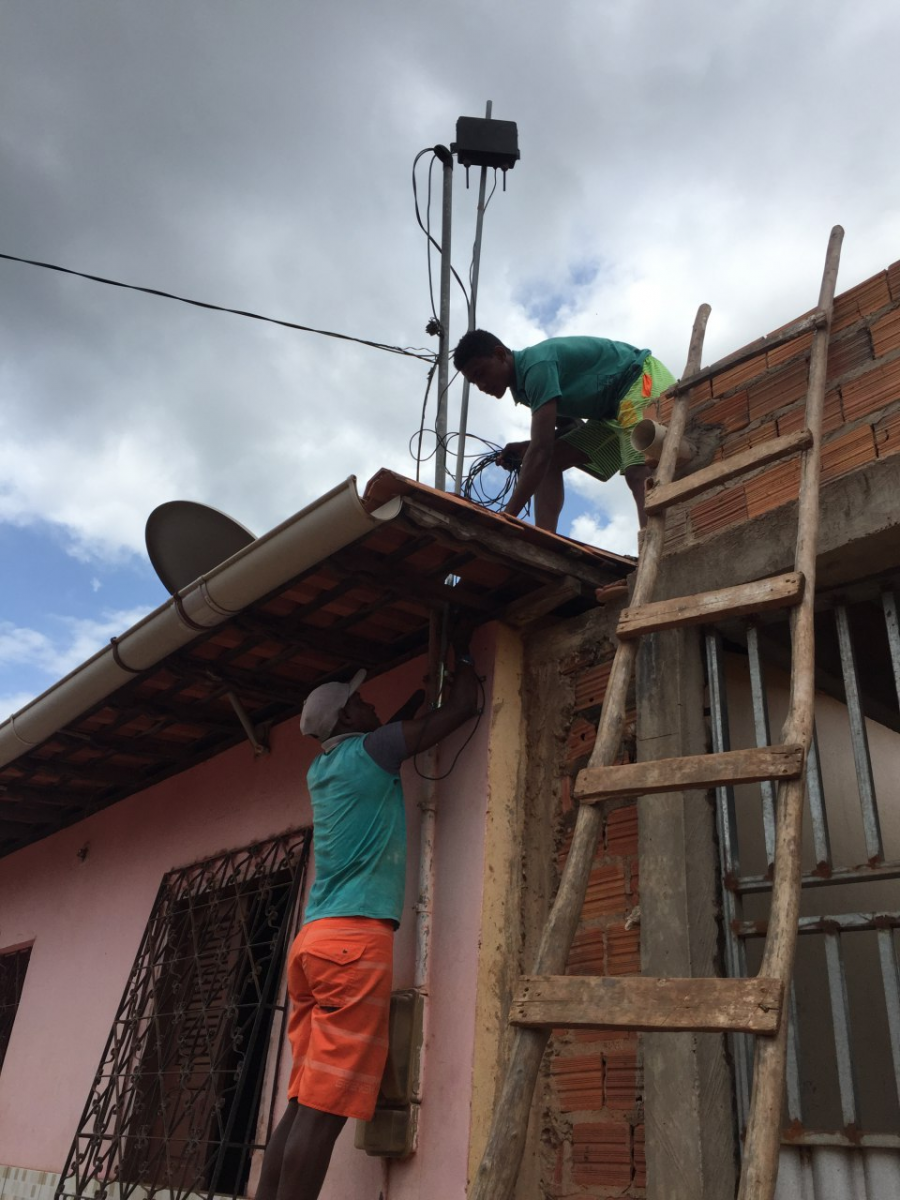 In Brazil, quilombola communities struggle to live in and make use of lands where their ancestors lived, who were brought over against their will as slaves by Portuguese colonisers. In the quilombo of Bairro Novo, in the Brazilian city Penalva, Nupef partnered with the quilombolas to implement a community network in 2017, aiming to support populations at risk to access the internet.

Although Penalva has had a stable and sustainable network since this implementation, Nupef and APC’s community network expert Mike Jensen identified the need to make improvements aimed at enhancing the resiliency of this network – in terms of reach, bandwidth and management.

To do so, in 2019 the software was updated for better local and remote management, while the connection speed and data cap were increased. To improve the reach and quality of the internet connection, four new nodes were implemented, almost doubling the area covered in the region. With the expansion, the number of people regularly sharing the costs of the community network doubled from 30 to 60 and the current network directly benefits over 300 people; occasional users number hundreds more.

Much of the land where the babassu palm trees grow has been irregularly occupied by extensive cattle ranchers and farmers that have destroyed a large part of the babassu forests, and now either ban the access of women to the palm trees or charge them for collecting the coconuts. Moreover, threats against these women and the forest have come from paper, oil and gas industries that are cutting down the forest to implement their enterprises, not recognising traditional communities’ rights. For these women, communication is also an important piece of their fight to allow the continuity of their population’s survival and improve their quality of life.

In the community of Pifeiros, a babassu coconut breaker community in Amarante do Maranhão, Nupef initially implemented an offline community network. The choice for the local network was due to the fact there was no internet provision in the area – no cable and no satellite reached this community. While an internet connection wasn’t viable, the local network allows the inhabitants to communicate with each other and access some local services for file sharing, local text messaging and calls, and gives them access to an offline Wikipedia platform and digital books under the public domain. 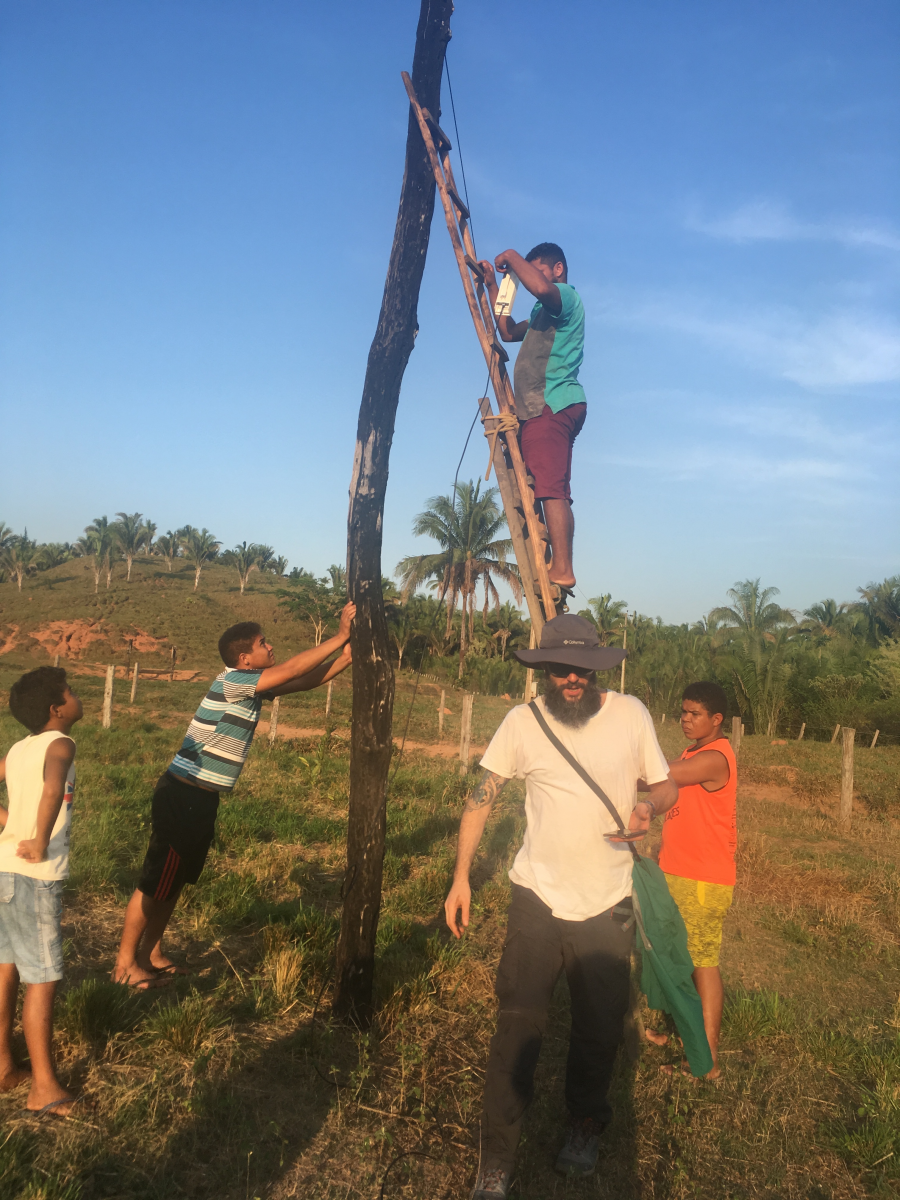 The value of local networks

In Pifeiros, community members highlighted the positive aspects of the project. According to Wcelia, a young babassu coconut breaker involved in the process, the news that their community network would not allow them to access the internet initially caused a certain level of frustration, because everyone was expecting to immediately use popular platforms like WhatsApp, Facebook, Instagram, etc.

However, during the week that Nupef was there implementing the local network, she realised that in fact “it was a very important step and may help future sustainable use of the network because implementing technology step by step – start communicating, understanding how it works internally – may have benefits for a community that has been living with no connectivity for decades.”

The local network reached about 90% of the community and around 40 people engaged in its implementation, in a deeply participatory process that went from defining the spots where the radios would be to actually installing them and getting involved in content production workshops. The Interstate Movement for Babassu Coconut Breakers (MIQCB) was an important partner for the successful experience in Pifeiros. Before Nupef got into the community for the first time, MIQCB held several meetings with the community to assess their needs and will to carry out this project.

According to Genival, a local leader and dean of their school, the chance of creating a community network with local services was an important achievement. “We got very excited since we were very isolated. This is the first step,” added Genival.

And Genival was proved right when several notable follow-up steps were taken. Between 2019 and 2020, mindful of the wish for greater connectivity by the community members, Nupef kept seeking a solution for internet provision in Pifeiros, and a potential provider was eventually found. Around this time, however, the COVID-19 pandemic emerged as another obstacle to the installation of an internet link in the territory. With the health emergency, internet connectivity became critical at the moment when important activities such as education and access to financial aid were moved online due to social isolation measures. In November 2020, however, the sanitary conditions in Brazil finally allowed Nupef to request the link installation and run some improvements in the community network.

Among its community networks projects, which include other areas and communities and which have the support of APC, Internet Society (ISOC) and the Ford Foundation, Nupef is planning to keep the approach of partnering with local communities to enable around 30 community networks in Brazil over the next five years. The pandemic is still a challenge, but at the same time it highlighted the importance of inclusive and participatory approaches to overcome access gaps and inequalities.

This piece is a version of a story made by Nupef Institute as part of the project "Connecting the Unconnected: Supporting community networks and other community-based connectivity initiatives", adapted for the Seeding Change column, which presents the experiences of APC members and partners who were recipients of funding through APC's catalytic interventions grants, and of subgrants offered through other APC projects and staff working on subgranting in the organisation.