The 12th annual Internet Governance Forum (IGF) took place between 18 and 21 December 2017 in Geneva. Once again, different countries, perspectives and stakeholders were brought together to discuss relevant issues related to the internet and technology, ranging from access and human rights online to new technologies and "hot" emerging issues. Here I will look at a number of the issues discussed that were of particular interest to me as they are related to the work done by my organisation, Intervozes, in Brazil.

Submarine cables: Internet access and power relations around the globe 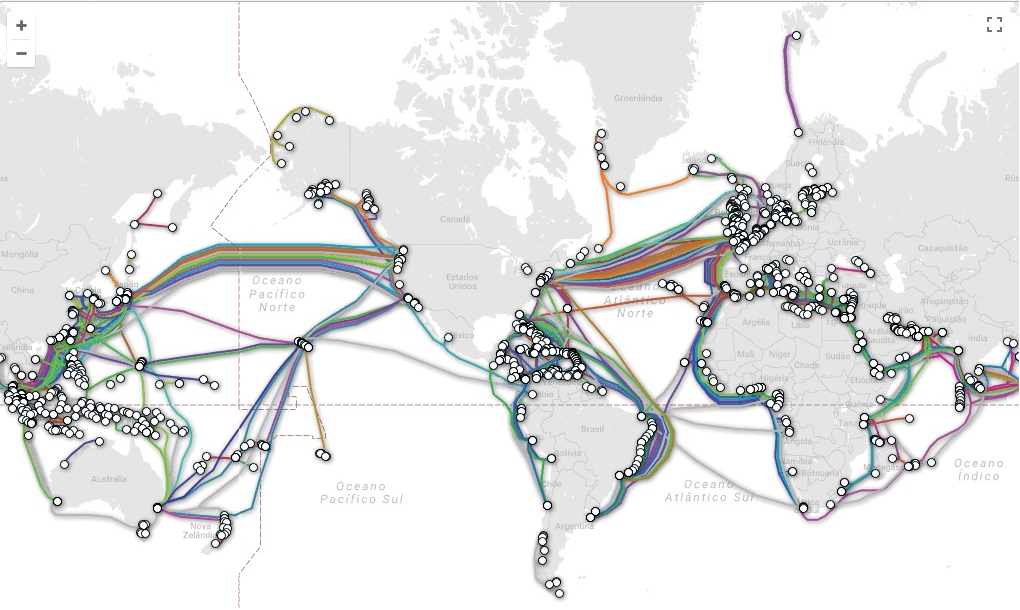 The distribution of submarine cables all over the world is certainly one of the many expressions of the global imbalance of power and resources. The image on the right, already so familiar, leaves no doubt about it. While Latin America cannot communicate with Asia without passing through the United States and has only one cable already in service which directly connects it to the European continent (the grey cables shown on the map are still under construction), the connection between Africa and the rest of the world is mainly made through Europe. As noted by Roxana Radu (Diplo Foundation) in the workshop The Future of Internet Governance: Submarine Cables and Global Interconnectivity, the internet is not actually so decentralised.

The workshop was organised by Internet Without Borders in partnership with Intervozes and discussed a series of issues related to global interconnectivity. Firstly, the prevalence of submarine cables in global communication, since only 3% of this communication is carried out by using satellites. The fact that it is a submerged infrastructure does not make it immune to risks. On the contrary, there are a significant number of incidents each year, largely related to fishing and shipping activities.

Another vulnerability comes precisely from the centralisation of these networks in specific countries or regions, which contributes to human rights threats on the internet, particularly with regard to freedom of expression and privacy, with traffic shaping, intentional disruption and surveillance. As a human rights-tied infrastructure, its construction and operation must be guided by transparency, among other correlated principles, which currently is far from being the rule.

The unequal distribution of submarine cables also impacts wholesale prices for internet links in different countries. This situation is directly related to the access drawbacks faced by non-central economies, leading to distortions such as the price of a circuit between Buenos Aires and São Paulo being twice as expensive as a circuit with the same capacity between São Paulo and Miami. Taking these impacts into account, the workshop looked at the Brazilian scenario to present the case of ELLALink – the cable that will connect the country to Europe and has a more participative governance model, although still in dispute – as well as to discuss the challenges of universal access and internet connection quality within national territories.

The concerns around so-called “fake news”

“Fake news” was a matter of discussion in several IGF sessions. One of them was dedicated to illustrating that, in addition to the global forum, the theme was addressed in many national and regional IGF initiatives (NRIs). The NRI Collaborative Session: Fake News, Disinformation, Misinformation: Challenges for Internet Governance, which gathered representatives of these initiatives in Nigeria, Croatia, Colombia, the USA and the Netherlands, sought to present the main topics of debate raised in each local event. Among others, the panel highlighted the negative impacts of fake news and its potential worsening with artificial intelligence (AI) technologies capable of forging audio and video; the difficulty of defining this concept and its misuse by the political class to target annoying news; the risks of censorship and of intensifying the power of platforms through initiatives that combat fake news; and the perspective that the answers are more related to digital literacy and multistakeholder processes than strictly technological solutions.

The same approach regarding answers was restated by the panel Fake News, AI Trolls & Disinformation: How Can the Internet Community Deal with Poison in the System, which also raised the importance of understanding economic incentives for disinformation and polarisation of opinions. In this sense, one should pay attention to who is financing this news on social networks and what role these platforms fulfill when providing the personal data of their users for micro-targeted content. A more comprehensive approach on content regulation on and by these platforms was made in the session Fake News Content Regulation and Platformization of the Web: A Global South Perspective, which focused on the “Global South” to warn about the risks and to think over the precautions related to this kind of regulation in countries where freedom of expression is often not adequately protected and supported.

Another crucial alert came in the intervention of Frank La Rue in the High Level Thematic Session Impact of Digitization on Politics, Public Trust, & Democracy, pointing out that the term “fake news” is a bit of a trap that has been used to “dissuade us from reading news and thinking news and defending freedom of the press which we believe.” Disagreement with a news story or a mistake made by a journalist cannot be classified and tackled as part of this concept – this is why we should refer, instead, to “information” and “disinformation”, in which the malicious intent to misinform is evident.

Considering the Latin American reality, the inadequacy of this term and the risks of importing a notion conceived by the North without taking into account the long history of media concentration and manipulation in the region were underscored in the Open Letter from Latin America and Caribbean civil society representatives on the concerns around the discourse about fake news and elections. The open letter was signed by more than 35 organisations and was read in the open mic/taking stock session, despite the protests of the Chair that the statement was not appropriate to the session’s purposes, an argument that was rebutted by speeches subsequently made by some participants. The letter is still open for endorsements from civil society organisations irrespective of their region.

Hate speech and online violence are also frequently at odds with with freedom of expression, since their repression entails online content regulation and the discussion about the role of intermediaries. As stressed in the workshop Selective Persecution and the Mob: Hate and Religion Online, held by APC, it is increasingly evident that hate speech online is spreading at an alarming rate, whereas too often responses to this fail to address the problem and reduce the openness and freedom of speech required to, in the end, eliminate and criticise hate speech. Dealing with specific cases, Gayathry Venkiteswaran presented the report Let the mob do the job, commissioned by APC, which shows the growing level of religious intolerance in Malaysia, India and Pakistan. The research indicates the interconnection between online and physical violence as well as how the existing regulations in the countries addressed are inadequate to face the problem.

The Brazilian case was also mentioned in the panel, emphasising the ongoing moral crusade against the LGBTQI community and the advances in gender issues (once more leading to negative impacts and violence inside and outside the network). Along with analysis of specific cases, the workshop touched on the pitfall of systematising the approach to the topic in national legislations, the vague definition of hate speech often found in these norms, and the standards that should or shouldn’t be required from intermediary platforms. On this last point, it was underlined that we need to go beyond the demand for transparency around the rules of content removal they adopt, pushing for transparency and consistency in the application of such rules.

Focusing on technology-mediated violence against women, the workshop Online Freedom for All=No Unfreedom for Women. How Do We Solve This Equation? discussed the course of action in the face of this scenario of violations, worsened by insufficient legal and institutional answers. As stressed during the debate, the pathway to overcome it cannot reinforce patriarchal and protectionist biases in existing laws when framing legal responses to online gender-based violence. With regard to platforms, among other measures, the participants pointed out the need for due process in addressing complaints and the importance of contextualising freedom of expression into their terms of service, taking culture and gender into account through an intersectional approach.

In the first main session specifically on gender in the IGF’s history – Gender Inclusion & the Future of the Internet – UN Special Rapporteur David Kaye, when addressing the alleged conflict between freedom of expression and the fight against gender-based violence, emphasised that “expression” and “protection” are not independent of one another and must go hand-in-hand. Taking into consideration the complexity of this topic, the main session touched upon gender and meaningful access to ICTs, internet policy, innovation and concerns, as well as positive potentials raised by emerging technologies. As for the task of promoting gender equality online, Veronica Birga (OHCHR) stressed that we cannot neglect the lessons learned through years of struggle for women’s rights offline, among which one of the most important is that those who suffer from oppression can only overcome it when treated as subjects and not just as objects of protection.

Inspired by this lesson, Derechos Digitales once again seized the IGF to launch the 2017 edition of its report Latin America in a Glimpse, this time dedicated to mapping projects in the region that work at the intersection of gender and technology. By focusing on initiatives related to gender, feminism and the internet in Latin America, the research found a highly active community of organisations and collectives that put into practice the notion that in the fight for human rights and empowerment, it is always necessary to address resistance to change.

Veridiana Alimonti is a member of the Intervozes board of directors. She attended the 2017 IGF with the support of a grant from the APC Member Exchange and Travel Fund (METF).