Promoting stakeholder engagement at the Open-Ended Working Group on ICTs 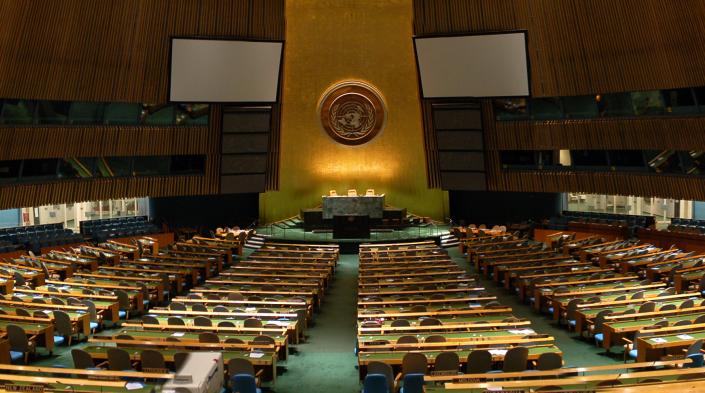 “Decides to convene, starting from 2021…a new open-ended working group on security of and in the use of information and communications technologies 2021–2025”

“Decides that the open-ended working group on security of and in the use of information and communications technologies 2021–2025 may decide to establish thematic subgroups, as the Member States deem necessary, with a view to fulfilling its mandate and facilitating the exchange of views among States on specific issues related to its mandate, and may decide to interact, as appropriate with other interested parties, including businesses, non-governmental organisations and academia”;

The aim of this brief is to support the implementation of the agreed language in the United Nations Open-Ended Working Group (OEWG) resolution pertaining to stakeholder engagement. This brief begins by providing interpretations of the text referring to stakeholder engagement in the resolution which set up the new OEWG, namely the terms “interaction” and “appropriate”. The brief then outlines how the first OEWG consultations with non-governmental stakeholders positively impacted the OEWG discussions, before providing good practices and lessons learned from CSO engagement in a wide range of forums, including non-UNGA forums.

Some of us have also been involved in contributing to, or reviewing, the work of Paris Call Working Group 3 (WG3) on “Supporting the Continuation of UN Negotiations with a Strong Multistakeholder Approach”, and we encourage readers of this brief to consult, and take into consideration, the recommendations included in the WG3 study, expected to be presented at the Paris Peace Forum, which will take place on 11-13 November, 2021.

What does “interaction” refer to?

"Interaction" is a procedural issue: it refers to informal or formal consultations, access, speaking and/or negotiating rights in intergovernmental meetings, formation of stakeholder groups, procedures for presenting non-state actors input and duties of state actors to report back what they did with the input, etc.

What does “appropriate” refer to?

Appropriate requires consideration of the range and diversity of expertise that civil society and other non-governmental stakeholders can bring to the table. As noted in the OEWG report, cyber threats may “have a different impact on different groups and entities, including on youth, the elderly, women and men, people who are vulnerable, particular professions, small and medium- sized enterprises, and others”. It is therefore important to recognise that a wide range of people and communities have a stake in these discussions and are able to meaningfully participate if they are interested.

As the OEWG report states, “The three-day informal consultative meeting of the OEWG held in December 2019 produced a rich discussion between states and a wide variety of other stakeholders. In addition, these stakeholders have provided concrete proposals and examples of good practice through written contributions and informal exchanges with the OEWG. Some delegations have also conducted multi-stakeholder consultations at their own initiative to inform their contributions to the OEWG”.[1] Below we include examples of how civil society engagement in these informal consultations supported the discussions and our analysis of how this was reflected in the final report.

Repeated reference to the importance of a human centric approach in the OEWG informal consultations was reflected to some extent in the OEWG’s final report (“Negative trends in the digital domain could undermine international security and stability, place strains on economic growth and sustainable development, and hinder the full enjoyment of human rights and fundamental freedoms”, para 3; “At the same time, the COVID-19 pandemic has demonstrated the risks and consequences of malicious activities that seek to exploit vulnerabilities in times when societies are under enormous strain. It has also highlighted the necessity of bridging digital divides, building resilience in every society and sector, and maintaining a human-centric approach”, para 4).

The differential impact on vulnerable populations

Repeated reference by civil society to the differential impact on vulnerable populations was reflected in the OEWG’s final report (“States concluded that threats may be experienced differently by States according to their levels of digitalization, capacity, ICT security and resilience, infrastructure and development. Threats may also have a different impact on different groups and entities, including on youth, the elderly, women and men, people who are vulnerable, particular professions, small and medium-sized enterprises, and others”).

The OEWG underscores the importance of narrowing the “gender digital divide” and of promoting the effective and meaningful participation and leadership of women in decision-making processes related to the use of ICTs in the context of international security", which corresponds to the recommendation in the report authored by civil society stakeholders, Women's International League for Peace and Freedom (WILPF) and the Association for Progressive Communications (APC): "States should commit to gender diversity in delegations to meetings and inclusive approaches to developing positions, statements, or other contributions."[5] While recommendations that gender should be mainstreamed across the report were not taken into consideration, APC and WILPF helped to illuminate dimensions of this issue that hadn't been discussed and build an evidence base for the importance of integrating gender into these cyber discussions.

In this section, we showcase good practices and lessons learned from civil society engagement in a range of forums, including those outside UN bodies/non-UNGA mandated bodies. The aim is to provide as wide a range of examples as possible to learn and build from, with the aim of encouraging the development of meaningful opportunities for civil society engagement in the OEWG and other First Committee processes related to international peace and security in cyberspace.

The Universal Periodic Review of the Human Rights Council

We encourage the OEWG to engage and allow meaningful participation in OEWG discussions of civil society, academia, the private sector, and the technical community. As noted in the good practices and lessons learned, meaningful participation requires a combination of both formal and informal opportunities to engage, easy and transparent access to information and clear channels for communication with decision-makers.

The OEWG should interact with other interested parties, including businesses, NGOs and academia because the discussion of the OEWG agenda and the implementation of its outcomes cannot be done by governments alone. Therefore, additional and complementary expertise is needed. For example, the nature of already identified threats (including “potentially devastating security, economic, social and humanitarian consequences of malicious ICT activities on critical infrastructure”) and nature of digital technologies (including their development, supply, and maintenance) linked to those threats means that the expertise required will go beyond what nation states are able to provide. Furthermore, those impacted by state actions are also non-governmental actors. As the consensus report of the OEWG  states “the OEWG has benefited from the expertise, knowledge and experience shared by representatives from intergovernmental organisations, regional organisations, civil society, the private sector, academia and the technical community”. It also states that “The value of further strengthening collaboration, when appropriate, with civil society, the private sector, academia and the technical community, was also emphasised in this regard”.

Building on the previous sections, we present here further recommendations to support the implementation of the agreed language in the OEWG resolution on stakeholder engagement.