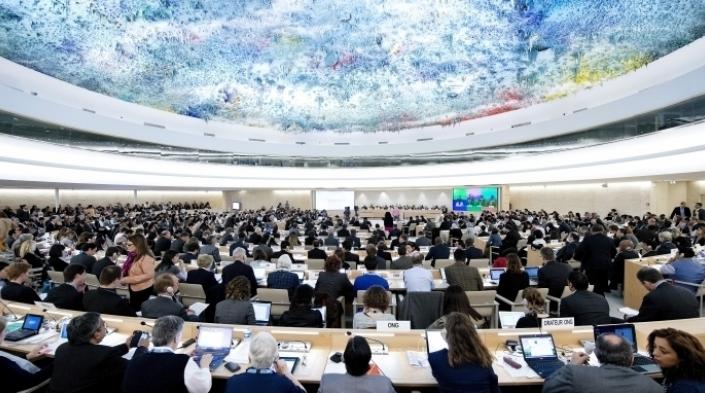 We welcome the adoption of the resolution on the protection, promotion and respect of women’s and girls’ rights in humanitarian situations, and particularly command the core group for this new initiative that seeks to bridge accountability gaps faced by women and girls in humanitarian situations. Adoption by consensus of this resolution emphasises the timeliness and importance of this new initiative and paves the way for greater accountability for women and girls in these settings and for approaches that centers their agency and meaningful participation.

We welcome the resolution on the safety of journalists. With impunity for attacks and reprisals against journalists as high as 90% worldwide, this resolution is more important than ever. In particular, we welcome new paragraphs addressing extraterritorial threats, strategic lawsuits against public participation, access to information, and overbroad and vague laws criminalising journalism, as well as strengthened language on gender throughout the resolution. We now urge all States to implement these commitments at the national level – commitments on paper are not enough.

We welcome that several States called for accountability for individual victims of reprisals in Egypt, Burundi, Laos, Venezuela and China. We urge all States to stand up for the critical voices of human rights defenders and seize the opportunity to take up specific cases in the report during future interactive dialogues.

We welcome the adoption of the resolution on the contribution of the Council to prevention of human rights violations, which contributes to strengthening the Council’s prevention mandate, mainstreaming prevention throughout the work of the Council, and bringing Geneva and New York, and the three pillars of the UN closer. We urge all States to implement the thematic elements contained in the resolution by applying them to country-specific contexts. In this regard, they should rely on objective criteria, including restrictions on civic space and attacks on HRDs, which often constitute early warning signs of human rights crises.

We welcome the High Commissioner’s update on police violence against people of African Descent. We also welcome that the High Commissioner will center the voices of victims of people of African descent, their families and communities in the preparation of the report on systemic racism and police violence against Africans and People of African Descent, and government responses to antiracism protests. We urge the Council to continue its scrutiny so that racial justice is achieved in the United States and around the world.

We welcome the leadership of GRULAC and the EU to ensure that the resolution on the rights of the child maintained its intended focus to ensure that children’s rights are protected from environmental harm, urging States to consider recognising a right to a healthy environment and to create inclusive and meaningful spaces for children to contribute to decision-making. However, we are concerned by the amendments put forward to weaken the text on child participation, setting a bad precedent. Furthermore, the Council lost an opportunity to reinforce States’ heightened obligations as reflected in the Framework Principles; promote gender inclusive language; strengthen follow-up to the resolution; and go beyond Council’s resolution 40/11 in recognising the role of child human rights defenders.

We welcome High Commissioner’s report on the impact of arms transfers and the resolution adopted on human rights impact of civilian acquisition, possession and use of firearms which, moving forward, need to ensure enhanced focus on preventative and inclusive approaches, and highlight the application of the business and human rights framework to the arms industry to not only address the impact of diverted firearms but also the impact of irresponsible legal transfers or acquisitions.

We welcome the urgent debate on Belarus and the resolution mandating the High Commissioner to monitor and report on the situation in the near future. We condemn the authorities’ continued crackdown on peaceful protesters and regret their rejection of any dialogue with opposition leaders and civil society actors. We reiterate our call on Belarus to put an end to all human rights violations and abuses against dissenting voices.

Recognised as a crime against humanity, apartheid gives rise to individual criminal responsibility and State responsibility to bring the illegal situation to an end. We urge the Council to take action to uphold the inalienable rights of the Palestinian people, including self-determination and return, by adopting effective measures to overcome Israeli apartheid over the Palestinian people as a whole.

We welcome that the Council has renewed and strengthened the mandate of the fact-finding mission on Venezuela (with an increased majority on the 2019 resolution) to allow for its enquiries to further bolster efforts to hold perpetrators to account.

We welcome the renewal and strengthening of the mandate of the Group of Eminent Experts on Yemen, including to collect, consolidate and analyse information related to, and clarify responsibility for, the most serious crimes under international law and tasking the GEE to explore and report on recommended approaches and practical steps to help ensure justice and redress for Yemen. We look forward to States building on this important progress as part of a holistic strategy towards achieving accountability and redress for victims in Yemen.

We are gravely concerned over the dramatic deterioration of the human rights situation in Cambodia over the past five years. Civic space has continued to shrink due to the adoption of restrictive legislations on Associations and NGOs, on Trade Unions, on the State of Emergency, and surely to be adopted draft Law on Public Order. Lack of independence of the judiciary and executive interference in legal and judicial bodies further enable rampant abuse of laws to target and harass individuals. Since the main opposition party was dissolved, its members have been mass criminalised and harassed. Independent media has been decimated, and HRDs are systematically targeted, even at the UN during the Interactive Dialogue on Cambodia. We urge States to take meaningful action at the Council to address the escalating violations and ongoing abuses of human rights in Cambodia.

Thousands of victims of killings and other violations and their families continue to be deprived of justice in the Philippines. The adopted resolution is a collective failure by the States at this Council to ensure the needed international investigation. It fails to reflect the gravity of the situation and the findings in the OHCHR report mandated by this Council. At the same time, the resolution keeps the Philippines on the agenda of the Council for the next two years. The Council can and should live up to its responsibility to ensure an international investigation if the killings and the crackdown on civil society does not immediately end and prosecution of perpetrators are not pursued.

In the absence of concrete progress in Burundi and given the government’s refusal to engage, a further extension of the mandate of the Commission of Inquiry is the most sensible way forward. The Burundian government should now change course by resuming its cooperation with the UN human rights system, including with the Office of the High Commissioner with a view to re-opening the country office, as a first step towards broader engagement with UN and African mechanisms.

The resolution on Sudan is a welcome step as it ensures that the country’s human rights situation will continue to be publicly discussed while the Transitional Government attempts to strengthen gains of the Revolution and prevent setbacks. Sudan’s political transition remains fragile, and we urge the Council to maintain a high level of support to, and scrutiny of, the country until at least the end of the transition, in 2022-2023.

We welcome the renewal of the mandate of the Independent Expert on Somalia, as continued attention to, and monitoring of, the country’s human rights situation is direly needed ahead of the elections planned for 2021.

We welcome the joint statement delivered by Denmark on behalf of 33 States raising their concerns over the human rights situation in Saudi Arabia, including calling for the immediate release of Saudi women human rights defenders. We urge the Council to continue its scrutiny and to establish a monitoring and reporting mechanism over the situation.

We also welcome the joint statement delivered by Germany on behalf of 48 States on Iran calling for the release of all political prisoners and those arbitrarily detained, and for perpetrators to be held accountable.

Human rights situations which should be on the Council’s agenda

Lethal disregard for the human rights of migrants and refugees continues unabated. This session opened with the High Commissioner calling for independent monitoring of pushbacks and collective expulsions at the land and sea borders of EU States. This session closes with this call unanswered. Silence from the Council tells migrants and refugees that their lives are disposable. Last week, a caravan of more than 2000 migrants left Honduras to the United States. Mexico and Guatemala expressly threatened them by implementing policies that discriminate, criminalise, fail to assess protection needs and put at risk the lives of the migrants. Silence from the Council tells States that the rights of migrants and refugees can be violated with impunity. The Council must act on the High Commissioner’s call and demonstrate that it can respond to human rights violations wherever they take place by establishing a monitoring mechanism for this and other deadly migration routes.

This session, hundreds of NGOs from more than 60 countries, from Azerbaijan to Zambia, joined the call by 50 UN Special Procedures and dozens of States for international monitoring and reporting of China’s sweeping rights violations. The High Commissioner for Human Rights should fulfil her independent mandate to publicly report on China’s mass violations, and the Council should act urgently to create a monitoring mechanism. No State should be above the law.

The Council should urge Algeria to "halt the arrest and detention of political activists, lawyers, journalists, and human rights defenders, as well as any person who expresses dissent or criticism of the government" and cease their arbitrary prosecution as highlighted by a joint statement from UN special procedures.

The Council should also urge Egypt to immediately release all those detained for exercising their rights, affirming the repeated calls made by Special Procedures and States over the past several years.

Weeks before the elections, no attention was paid to the increasingly violent situation in Bolivia, governed since November 2019 by an unelected government that has persecuted protesters, indigenous and union leaders and more than 150 members of the MAS party.

We regret the Council’s continued silence on the human rights crisis in Kashmir. More than a year after India revoked the constitutional autonomy of Indian-administered Kashmir, fundamental freedoms remain severely curtailed with ongoing reports of violence by police and security forces including the continued use of pellet guns against protestors, torture and custodial deaths. Human rights violations also continue to take place in Pakistan-administered Kashmir. We reiterate our calls on India and Pakistan to grant unfettered access to OHCHR and other independent observers to Kashmir, and on the Council to establish an independent international investigation mechanism into past and ongoing violations and abuses in Kashmir.

We regret the Council’s silence on the arbitrary arrests of peaceful protesters, intimidation and use of excessive force by the police in India. The government’s use of overbroad “national security”, “sedition”, and counter terrorism laws to intimidate, detain, torture and silence human rights defenders is a continuation of the erosion of democratic freedoms. The enactment of the Foreign Contribution (Regulation) Amendment Act, 2020 in September 2020 seeks to further restrict human rights advocacy and collaborative work among civil society and diminishes space for dissent.