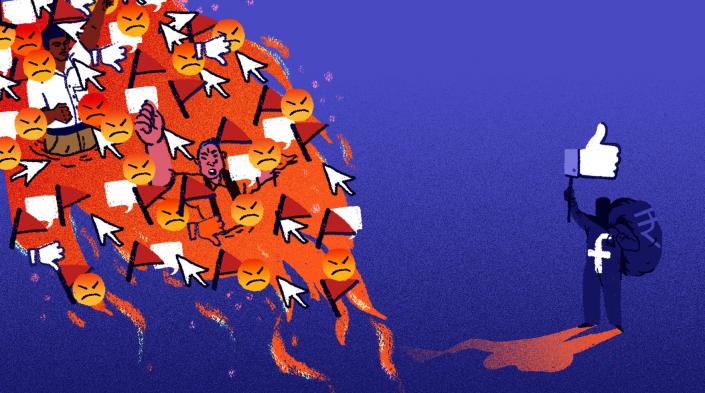 The Association for Progressive Communications (APC) is writing to express deep concern about the escalating instances of hate speech in India and is alarmed at reports of Facebook India’s failure to apply its community standards to the perpetrators of hate speech on its platform. We call on you to immediately conduct an investigation into the reported incidents and take action against such content. While this investigation is being undertaken, Facebook officials implicated in this conduct must be placed on leave or removed from their current responsibilities.

Over the past few years, we have noted a steady rise in hate and communal violence against persons belonging to minority religions in India. Earlier this year, India experienced historic protests against the draconian and discriminatory Citizenship Amendment Act and the National Register of Citizens.

In response, India has witnessed large-scale violence against dissenters, police excesses, and a clampdown on freedoms of religion and expression as well as assembly and association. Communal violence against religious and caste minorities has come at a severe human and monetary cost. This has been propelled by state complicity and rampant hate speech in media and online spaces.

Unfortunately, this has worsened with a steep rise in Islamophobic and other hate speech content against the backdrop of the COVID-19 pandemic, where members of India’s ruling party took to social media to propagate misinformation and stigma against minorities.

Hate speech not only hurts, but also lays the ground for hostility and violence. Even speech that is not a direct incitement to violence or discrimination may contribute to fostering greater acceptance of such violence and condones if not encourages such acts. Systematic dehumanisation carried out through smear campaigns, slurs, misinformation, sensational and fabricated “news” on social media enable the construction of an “other” as a threat to the social fabric or national security. This has the effect of routinising discrimination and even physical violence, ultimately paving the way for communal disharmony and genocide.

Social media platforms such as Facebook, which are a dominant source of information and communication, must ensure that your platforms are not used to perpetuate such violence.

The seriousness of the situation in India cannot come as a surprise to you. With over 290 million users, which is the highest across the globe, Facebook India has five offices in the country employing thousands of Indian nationals. Concerns relating to hate speech in India on the company’s platforms have been repeatedly brought to your attention.

For instance, in the aftermath of the implementation of the National Register of Citizens in the Indian state of Assam last year, Facebook was flooded with hate speech against Muslims, calling them “parasites” and “rats”, and calling for them to be exterminated. Little was done by you to curb this despite repeated reporting of posts by activists and users.

Facebook faced a similar situation in Myanmar where it was used to propagate hate and violence against Rohingya Muslims, which has repeatedly resulted in riots and violent killings. Following concerted efforts by civil society and international experts, who held that Facebook played a determining role in the spread of hate speech in Myanmar, you promised to take efforts to ensure that your platform will “never again” be used to perpetuate violence. Unfortunately, this has not translated into tangible action, as hate is rife on your platforms not only in Myanmar but also in other countries such as India and Sri Lanka.

Given the serious implications that hate speech can have in diverse and complex societies such as India, it is shocking to note that the issue is not being given due importance by Facebook.

In light of the gravity of the situation, reports from the Wall Street Journal (WSJ) of Facebook India’s top policy executive, Ms. Ankhi Das, opposing and preventing the application of hate speech rules to members of the ruling party in India is deeply disturbing. One reported case, for example, relates to a post by T. Raja Singh, a Bharatiya Janata Party state legislator, stating that Rohingya Muslim immigrants must be shot, calling Muslims traitors and threatening to raze mosques.

It was reported that there have been other such instances where community standards were not applied to members of the party on concerns relating to this affecting the monetary prospects of the company. Subsequent reports have highlighted bias against certain political parties and other reports also indicate that Facebook India employees have raised questions about community standards not being applied even-handedly by the Facebook India office and the lack of diversity in the public policy team.

Given that there are other instances where officials in Facebook have allegedly prevented efforts to ensure that the platform is a safer space for all persons, you must immediately investigate the matter and ensure that officials involved in such decision making are put on leave during investigations to ensure that the findings are not biased in their favour. Facebook must also engage with a range of stakeholders impacted by such practices to ensure that changes are introduced to avoid similar situations in the future.

Following the publication of the WSJ article, Ms. Das has been subjected to intimidation and sexualised harassment online, including on Facebook. This has caused her to file a criminal complaint against several individuals. In her complaint, Mr. Awesh Tiwari, a journalist, was included for his social media post commenting on the WSJ article.

We support everyone’s right to pursue legal remedies against harassment and gender-based violence. However, Ms. Das' criminal complaints against journalists such as Mr. Awesh Tiwari, who commented on the WSJ article as a media professional, seem to be intended to intimidate and goes against his right to freedom of expression.

This incident demonstrates the toxic environment on Facebook for users, especially women and other vulnerable groups. Even top executives wielding great power in Facebook are not spared from misogyny and hate online. We hope that you wake up to these harsh realities and realise the impacts of your failure to address violations on your platforms.

While we recognise the challenge facing platforms like Facebook in dealing with the volume of hate speech currently circulating online, it is imperative that policy and resources for addressing this issue are prioritised. We call on you to:

Facebook must root its community standards, policies and operations in international human rights law and standards, especially when dealing with hate speech, which has far-reaching consequences. Executives responsible for policy making and compliance must resolve to ensure accountability and prevent monetary considerations trumping the rights and safety of users. Hate speech from and against persons belonging to all or any religions or faiths must be treated with equal seriousness. This resolve must come from all levels of executives in Facebook across all countries, especially those in positions of power and influence. Going beyond apologies, Facebook must develop and commit to an action plan for how hate speech will be addressed and removed from your platform.

With this letter, we call on you to take immediate and concrete steps to eradicate hate from your platform, and move towards securing the rights and safety of all your users.