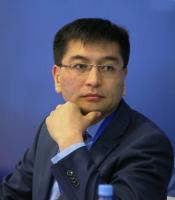 Talant Sultanov is the co-founder of the Internet Society-Kyrgyz Chapter. Previously he served as an advisor to the Office of the Prime Minister of the Kyrgyz Republic, where he coordinated the work of the national digital transformation programme Taza Koom. Prior to that, he worked as the director of the National Institute for Strategic Studies, a think tank where he advocated for economic development policies based on human capital, technologies and innovation. He has also worked at the World Bank’s Washington DC and Almaty offices. Additionally, Talant was a member of the Supervisory Board of the National TV and Radio Corporation, the Business Council under the Speaker of the Parliament, and the boards of directors of the Bank of Asia in Kyrgyzstan and Humo Microcredit Foundation in Tajikistan. He holds an MA in International Finance from Columbia University (2006) and a BA in International Relations from San Francisco State University (1999), where he graduated as the top student in his programme. He has also received executive education at the Harvard Kennedy School (2016).

Talant Sultanov is the regional coordinator nominated by the Internet Society-Kyrgyz Chapter, the project implementing partner in Asia.

About the Internet Society-Kyrgyz Chapter

ISOC-Kyrgyz Chapter was founded in 2015 as a result of collaboration between the global Internet Society and the local community. The work of the organisation is focused on improving internet connectivity, particularly in remote and rural communities. It is currently implementing such projects as a community network in a mountainous area of Suusamyr, the Bilim Bulagy Internet-in-a-Box project for unconnected rural schools and libraries, and an internet exchange point in the Ferghana Valley, among others.

2. In part, enabling the creation of new community networks via awareness raising and movement building.