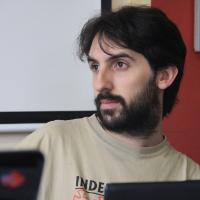 Santiago Piccinini has worked on community network projects for the last eight years, mainly as an external supporter of QuintanaLibre and DeltaLibre and developer of the software and hardware used in community networks all around the world: AlterMesh, LibreMesh and LibreRouter. He studied electronic engineering at the Universidad de Buenos Aires. A lover of software and libre culture, he has been involved in different projects such as LibreRouter, Cyclope CMS and Radioteca as part of Código Sur between 2011 and 2013, the RedPanal.org project as main developer, LibreMesh, and the firmware Chef.

From 2013 to 2019 he worked at Satellogic in different positions, mainly as team leader of the communications team of Satellogic’s satellite fleet. Besides the technical work at Satellogic, where he designed boards, radios, antennas, software and protocols, he did project management and was in charge of teams comprising four to 20 people in different locations, so he is able to confidently work and lead remotely. In addition to his technical studies, he studied Systemic Coaching, which provided him with skills to manage efficient, healthy and sustainable teams.

As CTO of AlterMundi he leads the technical efforts of the organisation, where the development team and other invited developers are working intensively on the development of the LibreRouter and LibreMesh software and network monitoring applications. They are also working on a system that allows remote support of community networks.